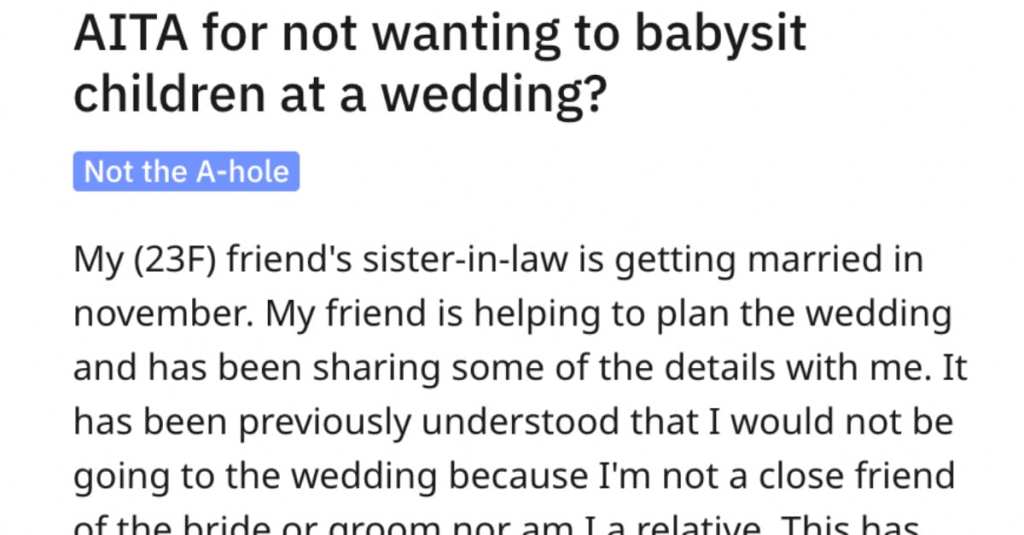 Is This Woman Wrong for Refusing to Attend a Wedding as the Babysitter?

Wedding invitations are, for many reasons, often wrought with drama. Whether we don’t really like the couple, we don’t want to have to find a babysitter, we’re not sure what to wear or what gift to bring, or we’re not sure we can afford to attend at all, there are decisions to be made.

This woman felt like hers had essentially been made for her when she realized she was only being invited to babysit the children at the ceremony.

It’s kind of an odd situation, because she doesn’t know the bride and groom and is only tangentially connected to the wedding and wouldn’t normally have been invited – and was fine with that.

My (23F) friend’s sister-in-law is getting married in November.

My friend is helping to plan the wedding and has been sharing some of the details with me.

It has been previously understood that I would not be going to the wedding because I’m not a close friend of the bride or groom nor am I a relative.

This has never bothered me and I’ve just been excited to know that two people that love each other are getting married.

Then her friend, who is one of the wedding planners, said she might be invited as a nanny for some of the children whose parents would be attending, but OP wouldn’t be paid or anything.

Today, my friend texted me and told me that I might have to go to the wedding.

When I asked her why, she told me it would be to take care of the guests’ children.

I thought she was joking but then she insisted that she was serious.

I asked if I would at least get paid for taking care of kids that aren’t mine and that I barely know and she said that going to the wedding was enough pay.

Her instinct was to say no, because if she was going to attend she would want to enjoy it, and if they needed a babysitter they should be willing to pay – one can’t enjoy the benefits of being at a wedding and watch children, after all.

Personally, I find it a little disrespectful that I would be invited as a nanny and not as an actual guest that would get to enjoy the wedding as much as the other guests.

I’m not even interested in being invited but if they actually wanted me to go I would want to be a normal guest, not someone taking care of at least 3 kids under 10 years old that I don’t know how to handle.

However, I considered the fact that they might actually need someone to help out.

So, am I being dramatic and an AH or should I stand my ground?

That said, she’s wondering now if she was too rash, and asking Reddit to weigh in.

This person agreed that needing a babysitter is fine, but not wanting to pay one isn’t cool. 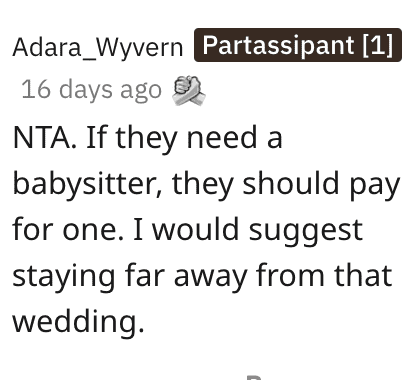 Another wedding babysitter weighed in, and said it’s hard work and not enjoyable and she definitely needs to be paid.

Most people agree that there’s nothing wrong with the request, but the way it was made makes them uncomfortable.

And maybe OP needs to have a heart-to-heart with her “friend.”

No is a complete answer.

This is a totally weird situation, and I definitely think OP is right to shy away from doing it.

If she does give in, I have a feeling we’re going to have quite the update afterward.