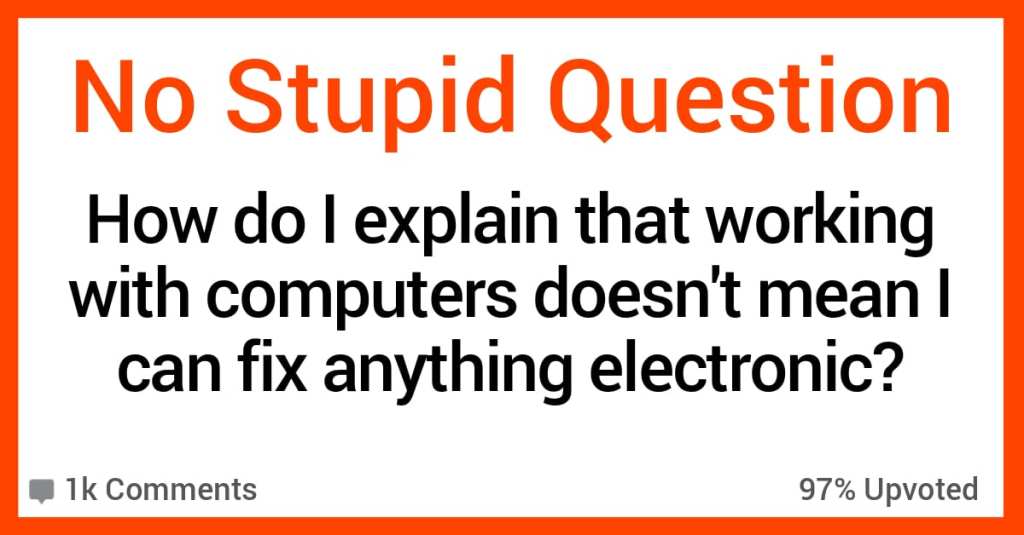 You know that thing where people think that, because of your job, you have this wide breadth of knowledge that they should be able to tap into whenever they need?

I think it happens in many professions, but probably is super prevalent when it comes to computers and software – because we all deal with those kinds of computers every day, we all have issues that need to be fixed or tweaked on a fairly regular basis.

This IT professional is asking for advice on a nice way to let people know that he might not be able to fix their problem, even if he’s good at computers.

Never tell people you’re good with computers, never fix any computer problems, tell them you herd sheep. They still might ask you to take a look at their printer.

My sister would buy the cheapest computers, the family would use them and click everything and then I’d come over and try to resolve their problems. Sometimes I’d say they needed to re-install Windows, and of course they never had the disc. So they’d buy another cheap computer, click everything, go everywhere and call me back.

They just wouldn’t learn. And they would blame the vendors too.

“Last time I buy a Gateway, it broke after just one year!”

Oh, you know how to drive? Great!

My car’s been making this weird sound for 8 months now, the ride is terrible, the hand brake doesn’t work and it smells like burning.

You can fix that for me, right?

I worked as an IT Technician at the local FE college back in the late 90s – early 00s and I bought a tee-shirt that said “No I Will Not Fix Your Computer!” on the front. I used to spend way too much of my free time fixing other people’s computers, usually for free, because I didn’t know how to say “No” to anyone back then.

It seemed people actually believed I enjoyed spending several hours pissing about rebuilding or troubleshooting their IT issues on a Saturday morning after doing the same at work all week.

I changed careers and became a plumber in the early 2000s and that was almost as bad with people wanting me to do their plumbing “spare time work” for either half my normal rate or even just for the love of it. I did learn how to say no eventually, fortunately. Almost always these were people who would do absolutely f**k all for me.

You buy a car but don’t bother to learn how to maintain it!

When I was 17 I could rebuild the carburetors on my ’69 Firebird blindfolded with one hand tied behind my back.

You kids these days don’t pay attention to anything unless it’s on a screen shoved under your nose!”

On the plus side, the modern steps for computer repair are pretty much the same as the steps for car repair.

Google the problem and watch a video on how to fix it.

9. Everyone has a specialty.

Explain it like doctors or lawyers, or any other profession with a massive amount of subspecialties: a dermatologist (skin doctor) can’t do anything about your eye glasses.

Yes, all people in a profession will have a baseline level of general knowledge (i.e. what a cell is, the way the court system is structured), but knowing how to design a website doesn’t mean you can make a video game, just like being able to set a broken bone or being great at property law doesn’t mean everything relating to medicine or law is something they can do.

“Listen here grandma, just because I know how to set up your wifi doesn’t mean I can solve your virus issues.

It’s just like how you can bake a good cherry pie but your beef Wellington tastes like trash.

I think IT professionals have it a bit harder than other kinds of professionals when it comes to interacting with friends and relatives. Firstly, computer problems occur more frequently than legal or medical problems, so from the start there’s more chances for people to want advice/help on that kind of stuff. In addition, since a lot of computer problems might actually be basic or nonessential stuff rather than emergencies (i.e. think designing a website vs. being sued or a broken leg), there’s more of an incentive to go find that friend/relative who’s “good with computers” rather than shell out hundreds of dollars for someone else.

For more blue collar professionals like plumbers, electricians, and HVAC workers, I think those kinds of problems are either so simple that people are generally able to solve them on their own (i.e. using a plunger on a toilet, replacing a lightbulb) or so complex that they have no choice but to pay another professional. That kind of skill also just seems rarer: I don’t have a friend who’s “good with pipes”, but everybody knows someone who is “good with computers” even if they’re not an IT professional.

Finally, other professions seen to be generally stricter in how they do things on the side for free. Doctors can’t just perform surgeries on their friends to be nice: they need full hospital facilities and support staff for that, so they’ll never be asked “Hey can you stitch up this cut?” the way an IT person will be asked “Can you help me make my website?”. They need to meticulously document everything and be careful to do things the right way, lest a malpractice suit or medical board inquiry come their way. Lawyers in particular can be cagey: even something as simple as giving advice creates a confidential relationship with vast implications, so those in the legal profession can’t just solve a friend’s traffic ticket the way an IT person may spend an hour or two on the phone with their friend over a Blue Screen of Death.

6. Metaphors seem to be popular.

My experience with something like that was being told “Well if I know how to play the piano then I’m probably going to be better at playing the guitar than someone who has never played music in their life, so couldn’t you just try?”

I’m a programmer so people think that exact sentiment. I know what they do for a living so I explain it to them in terms of their job. My aunt was a teacher her entire life so when she kept calling me for every little how do I do this on this website/software I explained it by asking her what her principal’s schedule was tomorrow? When are they in meetings and with who tomorrow at what time?

She finally clued in by saying “I don’t know it changes daily and I can only figure that out by taking the time to ask/investigate it”. I said exactly, I don’t know anywhere near everything about ‘computer stuff’ but I could figure it out if I spent a bunch of time looking into it and honestly I don’t have the time or energy to do this every other day.

“I’m not that great with tech, I just type my problems into google”

I mean, I pretty much understood it from how you just said it.

The people that ask you probably don’t understand how intricate a computer is so they see you as the magic computer man that can get things to work.

If the person asking is some friend or family member you could help them resolve the problem instead of doing for them, this may help them 1, understand how you can solve things and 2, demistify how a computer work.

2. Do you think Bill Gates really knows a lot about computers.

Me: writes their exact question on the google search bar and does what the first link says to do

I do know a bit more about computers than the average person but I’m definitely no Bill Gates, lol

1. Confuse them into silence.

Don’t say you’re good at computers in the first place.

Be specific at what you good at. “I’m good with excel VBA and some aspects of python coding. I don’t quite know the rest”.

Anyone asking you for things out of scope ask them did you drill in’ stutter.

These are always sticky situations, I think, and there’s some good advice here!

If you have any more you think would be helpful, drop it in the comments!