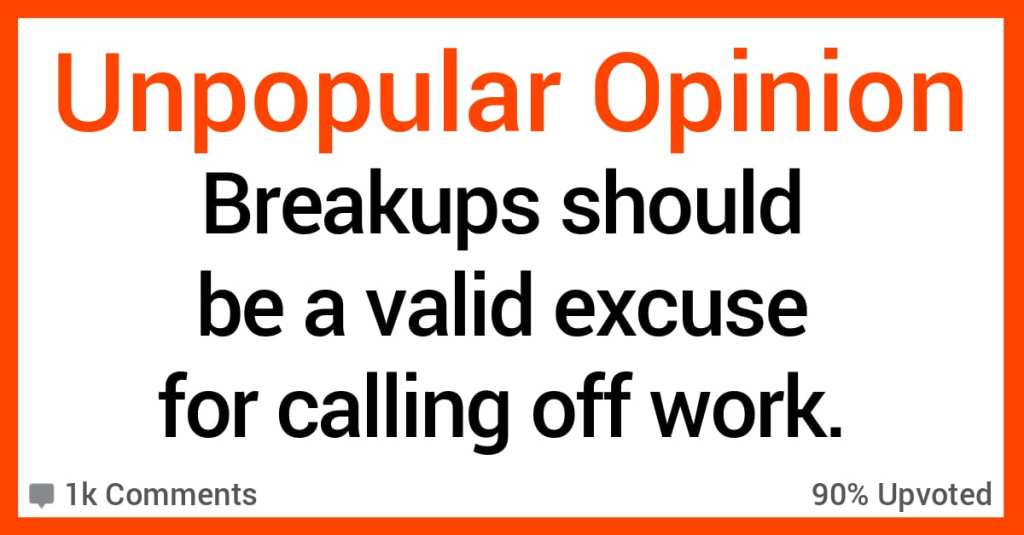 Should Breakups Be a Valid Excuse for Calling Off Work? People Discuss This Unpopular Opinion.

Anyone who has ever been through a bad breakup knows that functioning in the hours and days immediately afterward can be rough. You’re thinking about other things, probably going through those first stages of grief, and suddenly forced to imagine a future you hadn’t considered.

And yet, unlike a death or some other major life events that qualifies us for a little downtime, we’re supposed to go about our business as if nothing is happening.

This poster on Reddit thinks that should change, if not officially, at least in the minds of employers.

Break ups should be a valid excuse for poor performance, just like a family member dying from unpopularopinion

What did Reddit have to say in response? Stick around and find out!

12. So many lines to be drawn, apparently.

I agree with this, but there has to be a limit.

At my work, we are all about bringing your whole self to work. I very much buy into that and I want my team to be human beings, not numbers on a chart. If something is weighing on you, literally anything, it certainly can have an impact on your performance. The catch is, you need to be communicative about it. You don’t need to tell me 100% of what’s going on in your personal life, but if you are going to bring it to work, it does become my business. Together we can work out a plan to try to balance your work and life, maybe that means some time off, or a reduced workload for a bit. But, we also need to be realistic about how long that lasts.

As empathetic as I try to be, I do still have a team to run and work doesn’t stop. You can’t be checked out for 6 months because you got a divorce, we have to work together to get you back on track.

One of the things that surprised me the most when I moved into management is how much time I devote to acting as a therapist.

It’s a tricky balance to strike.

11. Breaks can be necessary.

Instead of excuses for poor performance, personal time off is a better idea.

I’m a psychologist. On days where I feel sh**ty myself, due to whatever reason (migraine, or simply just a s**tty day and too much stuff going on) I will cancel and reschedule client appointments. Yes, they have a reason to want to talk to me in the first place but if I can’t listen to them properly it’s just wasted time for everybody involved.

I think this post best explains what needs to happen. A business is still a business in the end. Now I’ll admit, after my breakup with my fiancé who was my girlfriend for fours years since high school. I needed a a day off because I seriously couldn’t focus. I let my managers know and they understood. Came back the next day and began working.

But even then when I came back they wanted reassure I was good and I was, at least to work. Managers can be cruel sometimes but not saying anything and expecting everything to go your way because you’re sad is unfair to not just the business but your coworkers too. Best thing to do imo is just communicate and if people don’t listen then you need find somewhere else to work.

Your mental health matters more than the business. Especially when you can be easily replaced at any given notice.

Depends on how often you go through breakups too though.

The end of a 20 year marriage is understandable.

But I’ve known some people who act like they’ve met the love of their life overnight and then two weeks later are going through a huge dramatic breakup, only to go out that weekend and start the process all over again.

It’s tiring enough to hear about as a friend, I’d rather not hear it from a coworker who needs constant drama in their life.

8. There are good managers out there.

The last line about being a therapist hit me as well. I spend more time as a therapist, mediator, coach and cheerleader than I do on the other parts of my job. But I realise now that is the role of a manager.

Before I got my current role it just always seemed they were “slacking off”, spending more time talking to people rather than doing “actual work”. But those same managers I look back and they were the best managers I’ve had. Because they would listen to you.

For me, I always try and work with my team, most importantly listening to them and trying to understand the issues behind what is happening on the surface. If people need time off for something, they know they can be upfront about why and I won’t judge them or unreasonably deny a request.

It depends on how long you’ve been together. 3 months?

Get your s**t together Sarah. 8 years?

Yeah cut ya some slack.

They said a breakup is not like losing a family member, but I have been with my boyfriend for over 8 years, he is my family.

The only way it would be less painful to be broken up with him than having a family member die would be knowing he is alive and healthy.

6. You have to think of your employees as people.

People are too busy putting their business hat on.

I get it, I’m HR. Yes, losing an employee for a period due to any reason is going to harm productivity and if it’s a recurrent or ongoing problem then you’re going to look at mitigation strategies.

But losing a relationship is still going to be painful. Some people can stick it out and mostly be ok without letting it impact their work. I had one employee whose father died and she only took a day off to go to the funeral. But I’m not going to judge someone who might need some time off after a painful breakup, or try and go “Well Maya only missed a day off work for her father’s funeral, so I don’t see why you need a day off just from your gf dumping you”.

5. It’s different for everyone.

I don’t know man sometimes a 3 month flame can hurt much worse than an 8 year one because the feeling is still in the honeymoon phase.

8 years can do wonder but also make two people hella bored of each other.

Point is how much it hurts can vary wildly and not necessarily due to time.

break ups are like withdrawing from a drug.. it’s not a good time

I lost my first job after losing my first love of 4 years. I just could not focus on anything.

It’s a very real thing and the sooner employers realize this the happier everyone will be.

I was embarrassed at first, but my therapist mentioned that breakups still go through the grieve process.

Unfortunately, there are those serial daters who tend to get heartbroken every few months or so.

2. We all have to figure out how to function.

I think it depends on your job really.

Of course realistically your personal life comes before work performance…but some jobs have no wiggle room (brain surgeon for example).

You still have to do your job regardless of what’s going on and be professional when doing so.

If not…you’ll be in the unemployment line pretty soon.

Take my upvote for your unpopular opinion

1. Surely there are people who can fill in?

Here is the thing.

I’m sure as much as you want to understand the mechanics feelings you still need your car fixed.

Better yet what if the lawyer representing you in an important legal matter had a major breakup the morning of your court date.

I think that people should ideally have a good enough relationship with their employers that they can tell them what’s going on and be treated like a full human being in response.