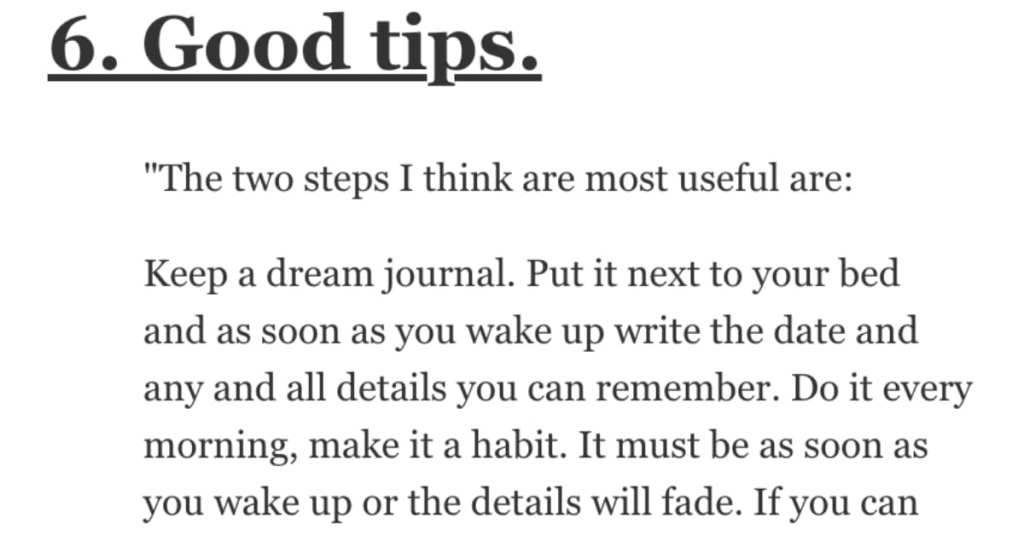 Lucid dreamers took to AskReddit to talk about what it’s really like. Let’s see what they had to say.

“I gave lucid dreaming a try when I was younger. Couple things:

The hard part isn’t lucid dreaming, but rather staying asleep once you realize you’re in a dream. The lucidity would only last for a few moments, generally, after which I would either slip back into non-lucid dreaming or wake up completely.

It wasn’t as vivid as I’d hoped. I thought lucid dreaming would basically be like living in my own virtual reality, but that wasn’t really the case – the sensations aren’t as crisp or real-feeling when you know it’s a dream. I wanted to feel like I was skydiving, or having s*x with a model, but it felt more like just sitting and imagining something really vividly.

Because of issue #1, I didn’t feel as rested in the morning after a night of attempted lucid dreaming. That, coupled with issue #2, led me to stop actively trying to do it, it wasn’t really worth it.”

“I tried doing this when I start having nightmares so I can wake up, I start trying to logically think if something doesn’t make sense, “Why would I do? Would I ever even do something like this?” I also try to practice this when I’m awake if something seems off so it just becomes the habit to do in dreams.

But, the main problem comes in when the dream makes a fake memory or rationalizes it. It might not even make any sense, but your dream self with think, “Oh, yeah, that makes total sense” and then the dream just continues.

I’ve never been able to control the dream or anything, but I find it very hard to wake myself up when I realize that I am dreaming, which ends up freaking me out even more.

The only time I’ve ever successfully woken myself up was in a dream where I had cut off all my hair into jagged parts and a part of me thought, “Why would I cut off my hair!? I’ve been growing it out for so long!” And then the rational part of me thought, “I wouldn’t have done that.” And it still took me a good moment to force myself awake.”

“The ability to travel anywhere and do anything works well in theory in dreams, but in my case, I can only control stuff if I believe I can.

It’s easy to know I’m in a dream, it’s hard to believe I can do things that I can’t normally do.

I never learned how to lucid dream, I just eventually started to be able to recognize that I was in them.”

Also once you wake up it’s worse. One time I had when I woke up I was still half dreaming, trying to wake up.

But then “fully” woke up and I’m in sleep paralysis. It was only a few seconds but sure was annoying.”

“So two things I know that help, one is waking up after a dream and writing down what happens as much as you can. The second and most important is to make it a habit while you’re awake to look at your hands.

“The two steps I think are most useful are:

Keep a dream journal. Put it next to your bed and as soon as you wake up write the date and any and all details you can remember. Do it every morning, make it a habit. It must be as soon as you wake up or the details will fade. If you can start noticing themes that regularly occur in your dreams, bonus this will help you recognise you are in a dream, but not essential.

Practice “reality checks” regularly. This step will sound a bit nuts to beginners but the theory is, if you can make it a habit of checking if you are awake, eventually your brain will do the check when you are asleep and you can realise you are dreaming. There are many different ways you can do reality checks, so I would advise read about them and pick your fave.

Clocks, screens and mirrors all behave weirdly in dreams. My fave, and easy to do anywhere is: ask yourself am I awake or asleep? Hold your nose and try to breathe through your nose. If you can’t, you are awake, if you can, well done you just did a reality check in a dream.

Practice these 2 steps everyday. The first time you realise you are in a dream, the excitement is very likely to wake you up, don’t get discouraged just keep doing the steps and eventually you will do it and remain calm. Then you can go explore your dream and have some control over what happens.

Regarding the realism, my understanding is your brain can only accurately simulate what it has already experienced but will give a really good go of filling in the gaps. So in my experience if you touch a tree or a building in a dream, the detail and feel has been spot on!

However my favourite thing to do in a dream is fly. Did it feel realistic and accurate, not really. Was it still fun, yes!! I found lucid dreams were very vivid and realistic enough!”

7. Didn’t realize it until later.

“I am a lucid dreamer and I didn’t even know it was a thing until I was in my 30s.

I think and talk a lot about my dreams in my waking hours, and that made me more aware of when I was actually dreaming. Eventually, I learned that when I was aware of this, then I could take control of the dream and do things.

Just being more aware of dreaming in general in my waking life, helped in my sleeping life. Sometimes I remind myself before I go to sleep to think of things I like to do or problems I want to solve. This probably works less often than not, but it definitely works quite a bit and well enough.

It’s not always so easy, I often wake up from dreams where I could have taken control but didn’t and I regretted it. Just two nights ago I had a series of dreams that repeated the same elements. This was because, as I was exiting the first dream, I realized there were things I had wanted to do in it, so I did a replay. I did this several times until I could get enough control to do what I wanted, even still it didn’t work so well. Sometimes, I will analyze a previous dream in a subsequent dream.

I used to just do wild gymnastics or fly when I realized I was lucid dreaming, but that eventually got old. I went through a period where I would try to eat all the things that are “bad” for me so I could enjoy it with no consequences, but it just wasn’t the same. Now, I focus on having conversations with people I wish could have.”

“I discovered lucid dreaming as a result of reading Carlos Castenada and his books on reaching a higher consciousness.

The dreaming part was a logical progression on the ladder.

“I’ve been lucid dreaming naturally for as long as I can remember. I can always tell I’m dreaming but haven’t figured out how to control my surroundings or do anything really cool yet.

A lot of the time I just acknowledge I’m in a dream and go about the rest of the dream. I’ve seen a few comments about looking at clocks and hands as a way to tell yourself you’re dreaming and it absolutely works. I’ve seen clocks melt and my fingers morph together (both mildly alarming).

There’s also a kind of lucid dreaming called “false awakening” where you wake up and do your whole morning routine (get out of bed, brush teeth etc) in what feels like real time only to “wake up” again and realize it was a dream. I’ve had that sequence go on upwards of 15 times, anyone else have that happen??”

“I got into it in 2011 I’d say the best method is to induce sleep paralysis by lying on your back.

The sleep paralysis is scary but you can enter a dream or astral travel from there.”

“Got into it a long while back after just hearing about it. Did a tiny bit of research and immediately had one that night, which I understand is common.

Realism of them can vary. Some I’ve had were almost as real as they could be, others were… not? Hard to explain, like there’s interference, a bit like just really vividly imagining things. It really depends on the dream I become lucid in I suppose.

As for tips, there’s various ways to actually achieve lucidity, but I think starting out the easiest way is to simply start logging everything you remember from dreams. The reason for this is two-fold. One, it improves your ability to remember your dreams. Lucid dreams are still dreams, and honestly they are often only a bit easier to remember than normal dreams.

No point in going through learning all this if you don’t remember them, right? The other reason is to figure out what your specific common themes in dreams are. Everyone has certain things that happen in a lot of dreams. A common one is teeth falling out in dreams, but most people have specific recurring weirdness. Writing down your dreams lets you spot these things, and you can drill it in your mind to learn to spot these things.

One of the easiest ways to learn to become lucid is to simply ask yourself occasionally if you are dreaming right now. Starting off, just try to do this every once in a while, but over time you can figure out things you specifically need to question.

You basically just gotta question yourself every once in a while. Good ways to check are to try holding your nose and try breathing through it anyway, or pushing a figure through your hand. This way isn’t super consistent, you get lucid experiences randomly, but it doesn’t mess with your sleep schedule or require you to trigger sleep paralysis, you just sleep normally.

Be prepared to wake up a lot when starting out. The hardest thing is staying calm when you start noticing you are lucid, as you unsurprisingly tend to get excited which can wake you up. Over time you can get better at staying asleep, but don’t expect to do anything too wild.

Best thing to do is to let your dream take you and be an observer, just focus on staying lucid (it’s easy to lose it). Though fair warning, you tend to get a bit impulsive in dreams. Even lucid, at least for me, my mind tends to not be 100% all there, so to speak.”

Do you know anything about lucid dreaming?

If so, tell us how it works in the comments.