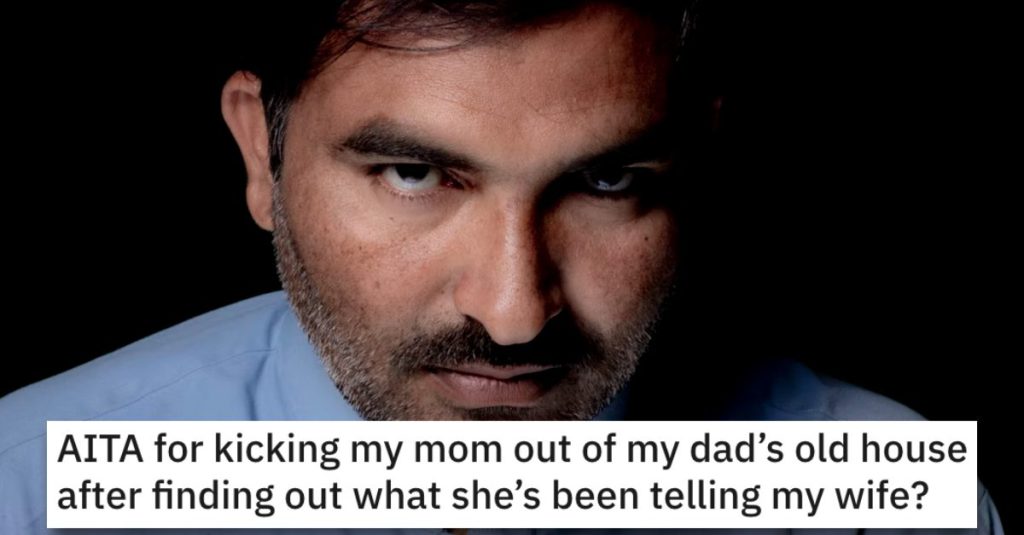 It’s never pleasant to kick someone out of your house, but you can imagine the kinds of hurt feelings that would bring up if the person getting the boot is your own mother.

AITA for kicking my mom out of my dad’s old house after finding out what she’s been telling my wife?

“I’m (33M) beyond angry about this, some of my siblings are telling me it was an overreaction while also mad at what she did. I’d really like some thoughts because the house seems divided.

My wife Kara and I were friends for years, she was in a very toxic and abusive relationship for 3 years until she had begged us (me and our close friends) to help her get out. It was difficult but we made it possible. We all pitched in for her to stay as far as possible while she got a restraining order and all that jazz.

We each took turns going to visit, then she found out she was pregnant so I helped out more. Her ex passed from an overdose when my stepson (7M) was 4 months old so since then we all became sort of like uncles/aunts to him. Around that time I knew I developed feelings for her but we never ever did anything because she had her son and personal issues to process. It didn’t feel right at the time.

But yes we did start a relationship 3 years later. She’s the one who first admired she’s in love with me so things went from there. We just got married, she’s 5 mos pregnant with our second child. I will say that yeah my mom had issues at the start of our relationship because she believed Kara was faking what happened to her just to make me feel sorry for her and take care of them.

We went through a period of not talking until she apologized so we mended things somewhat.

My mom came to stay at our house which was my dad’s house until he decided to give ownership to me when they moved. He passed away 10 months ago and with the economy my mom couldn’t stay where they were living before. We are still trying to work out where she can live long term.

I heard my mom get into an argument with my wife because she was trying to redecorate the nursery against Kara’s wishes. All I heard was my mom telling her she’s not the lady of the house just because her “fake victim sob story” worked on me. She looked flustered when I demanded her to tell me what that meant.

And basically she held onto that same belief but she was will to put up with my choices on who I marry so she doesn’t lose me. Everything she had to say infuriated me. And then seeing how upset Kara was by everything, I called my brother to come pick my mom up because she can’t stay here right now.

My mom wouldn’t stop crying to not do this to her just for being honest. She’s still at my brother’s but they keep trying to talk me to let her come back because this was my dad’s house and of course she wants to feel closer to him.

But after asking Kara if this is the first time she’s said anything she revealed my mom has told her numerous times what she thinks of her and kept it from me because she knew it would hurt our relationship. For that reason I haven’t let my mom come back.

It’s hard because I know what this house means to her and that she’s still sad about my dad but also can’t forgive her upsetting my wife. AITA?”

One reader said this man is NTA. 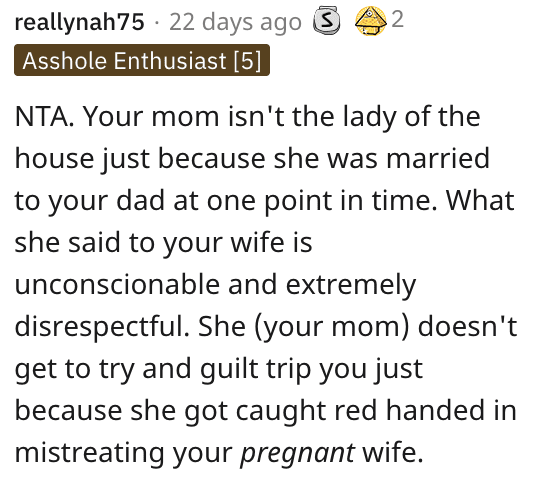 And this Reddit user agreed and said that his mother made a choice. 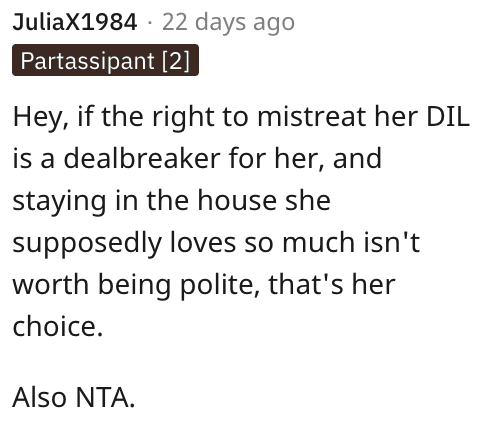 Another individual made a good point about people who say they’re “just being honest.” 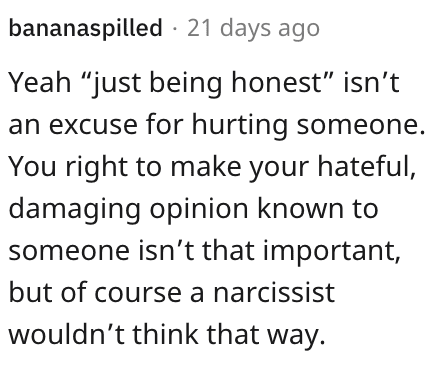