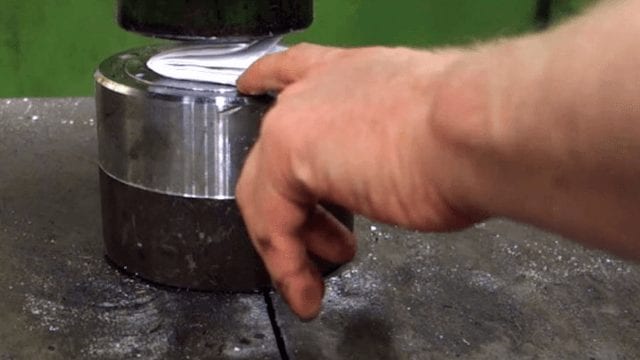 Have you ever heard the myth that you can’t fold paper in half more than seven times? Some dude with a boss accent decided to test the theory, and, boy, the results were not pretty.

The creator of the Hydraulic Press Channel recorded himself folding an A3 piece of paper (that means it’s about 11 by 16 inches)—a few times with his hands. Then he used a hydraulic press (a contraption that, um, presses stuff) to forcibly fold the paper.

Ugh, the darn thing shattered on the seventh fold. So according to the video, the myth still stands and it turns out that paper can’t be folded in half even seven times. Womp.

However, the folks at Mythbusters also took on the paper fold theory and they proved that it’s kinda true? They managed to fold a humongous sheet of paper 11 times with a steam roller. Still, that’s not the real thing right?

This article originally published by our partners at Someecards.