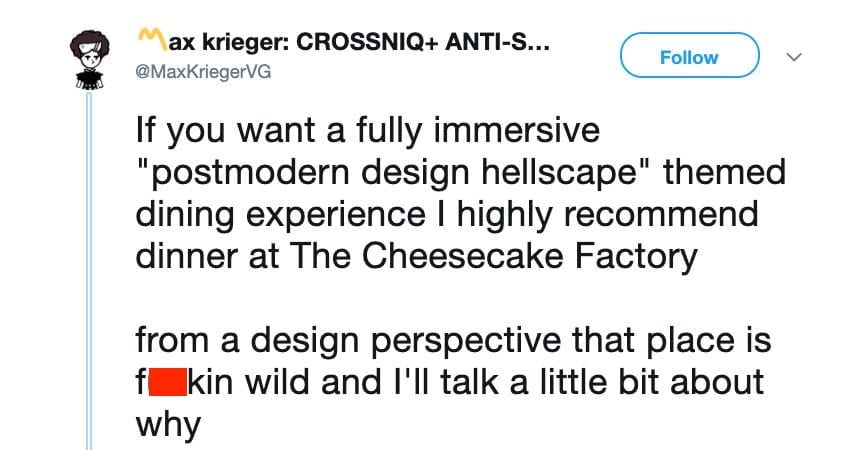 Man Explains Why the Cheesecake Factory Is Such a Bizarre Restaurant

It’s a well-known fact that The Cheesecake Factory is one of the weirdest restaurants on the planet. But what, exactly, makes it so strange? The way-too-long menu? The slightly-insane decor?

A design enthusiast wrote a Twitter thread about his take on the matter, which is that The Cheesecake Factory is a “fully immersive ‘postmodern design hellscape’ themed dining experience.” The thread has gone viral, because it’s hilarious yet surprisingly educational.

“From a design perspective that place is fuckin wild and I’ll talk a little bit about why,” Twitter user @MaxKriegerVG began.

from a design perspective that place is fuckin wild and I'll talk a little bit about why pic.twitter.com/0RHFDjKsuo

First, he starts with some history: the restaurant apparently grew out of a Los Angeles bakery business. In 1992, they brought in hospitality designer Rick McCormack.

That’s when, @MaxKriegerVG says, “shit went off the rails. We’re talking VICTORIAN-EGYPTIAN-ROCOCO OFF THE RAILS.”

I mean check out this exterior

There’s the exterior’s weirdly Old World feel, then there’s the interior: “A world of aesthetic chaos that feels like a mix between a Fry’s Electronics, an overgrown Panera, and a laser tag arena. It’s sensational,” @MaxKriegerVG says.

Between the Egyptian columns, the wood paneling, and the glass dividers, the whole space is pretty much a design mess.

There’s also the odd juxtaposition of luxury and cheapness. The water tankards are plastic, as are the wicker chairs and the table. Also, all the “exotic” fake hieroglyphics and whatnot. @MaxKriegerVG calls it “surreal,” and he has a point.

He also points out the menu — excuse us, four menus — which bafflingly include advertisements “for THE RESTAURANT YOU HAVE ALREADY CHOSEN TO DINE AT.”

“After wandering the menu a while, helplessly, you order and the food arrives. It’s good. Not bad, not great, but good,” he wrote.

Meanwhile, the actual cheesecake is very much the afterthought of this restaurant, despite the name.

And then, at the end of it all, in a cold lonely counter cooler, the cheesecake.

my location placed it near the lobby/exit, far from the dining area. alone.

The namesake dish feels utterly inconsequential by the time you reach it.

Perhaps it meant something once. pic.twitter.com/Sau8s5QQa7

Point taken — The Cheesecake Factory is a fascinating study in aesthetics, design, and capitalism.

But more importantly, where did this guy learn all this Cheesecake Factory history and how can we sign up for the course?