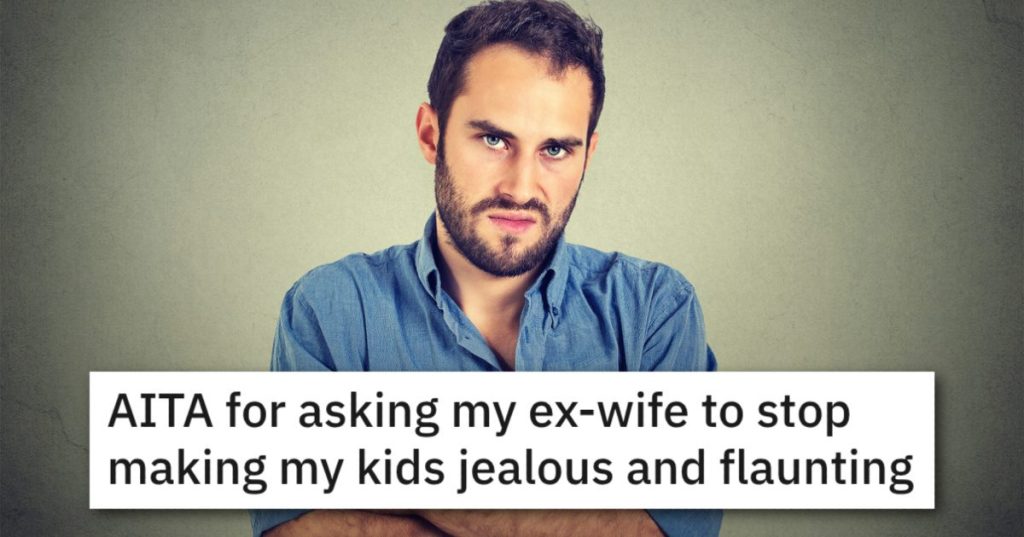 Divorce can be a tough situation for everyone involved, but it’s a part of life, so most know you just have to make the best of it.

That can be tough when one spouse ends up doing a lot better for themselves financially than the other – a fact OP here is finding out the hard way.

He and his ex-wife have been divorced for a decade. She is still single and makes 6 figures a year. He is remarried, has fathered 3 additional children, and makes…a lot less than that.

I have my sons over every weekend. About 4 years, my ex wife opened up a online business and she’s been making 6 figures. While my wife is a stay at home mum and I make 30k to support our family.

His ex-wife lives in a nicer house, drives a nicer car, and takes their sons on a couple of really nice vacations a year.

So you can imagine how this difference has affected our 2 households. They live in a gated community, she drives a 2022 rsq3. And she and our sons go on 2 extravagant holidays a year.

Recently the boys came to his house excited about a Disney vacation, which caused his daughters to want to go, too – a trip he quickly realized he couldn’t afford.

My sons came over this weekend and starting tell me and the girls they’re going on a Disney concierge cruise in the summer. My daughters started crying saying daddy we wanna go, and when I looked online for the prices they’re priced at $5k per person.

It’s been all they’ve talking about non-stop. I feel like their wealth is being shoved down our throats, when we can barely afford heating this Christmas.

He texted his ex-wife asking her to stop flaunting her wealth, and asked his sons not to talk about trips and the like in front of their half-sisters.

OP thinks she’s being spiteful, but is she?

It’s hard not to be hateful but I sent her a long text saying stop trying to make us feel less than. I also told my sons in private pls don’t mention holidays or gifts around the girls.

She replied with saying it’s not her problem how we feel, and when she does nice things for the boys. Me and my wife are the last people on her mind?

am I reading into this too much? Or am I the asshole for saying she’s spiteful?

I have a feeling Reddit is about to set him straight!

The top comment says he’s the AH, no bones about it. 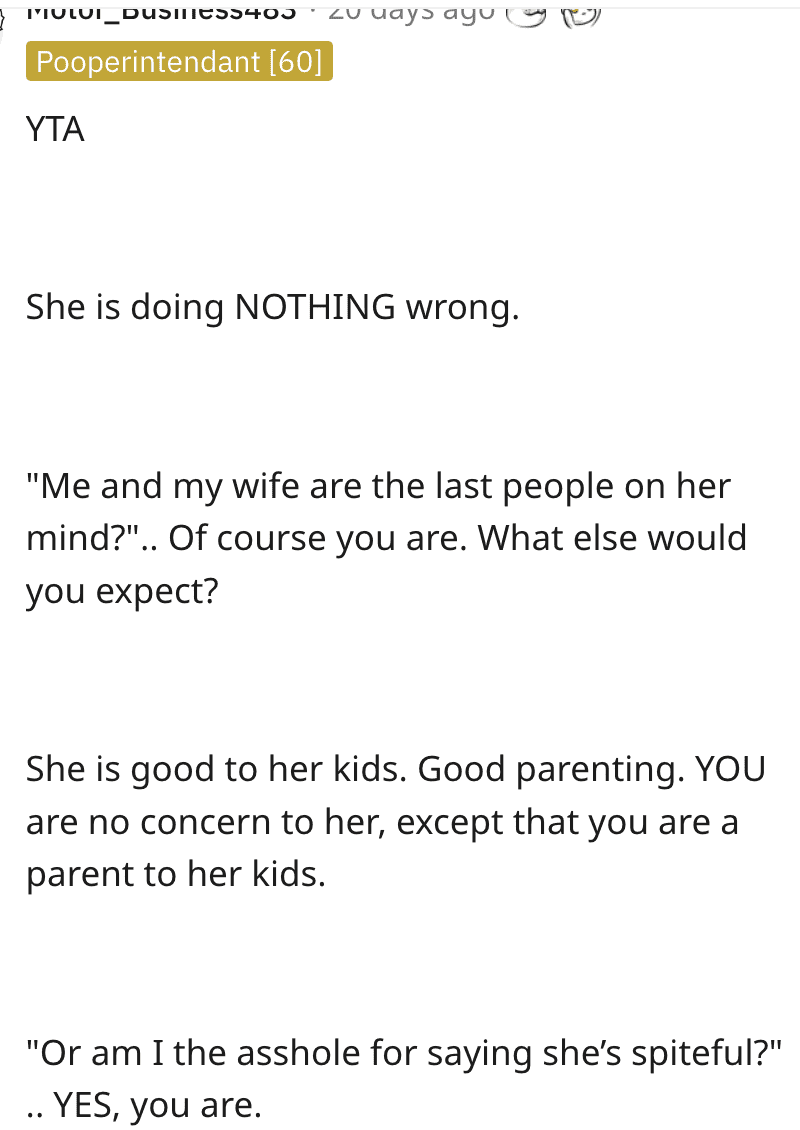 This person agrees the wife has no reason to consider her ex-husbands fragile feelings here. 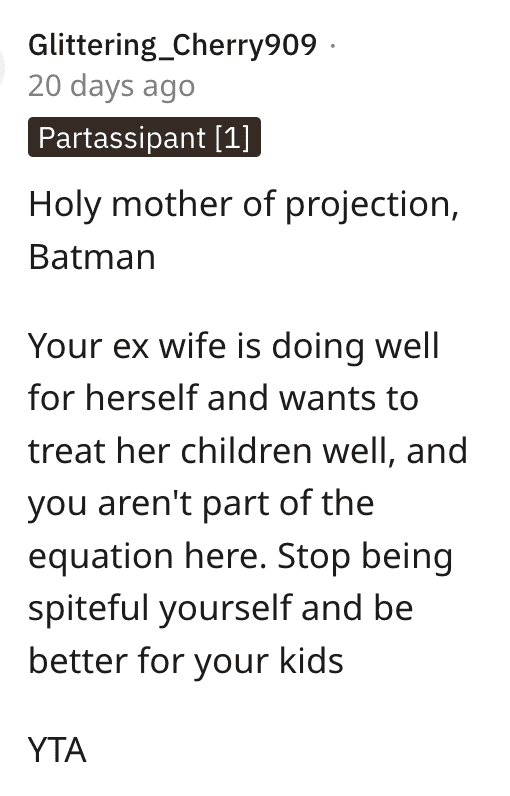 They think the whole thing reeks of sour grapes. 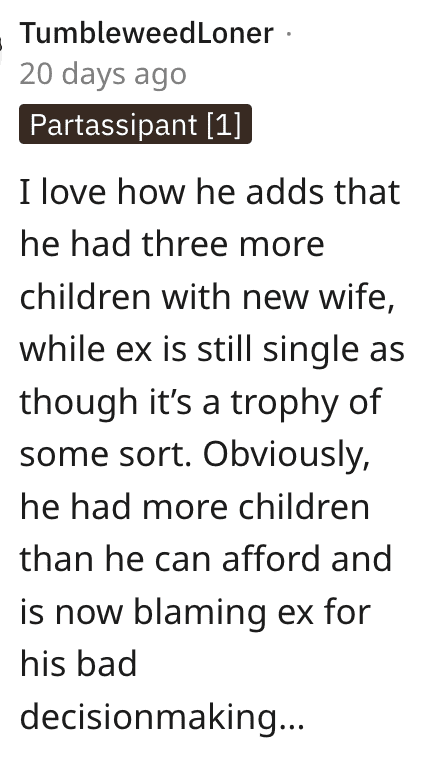 This commenter says score one for karma. 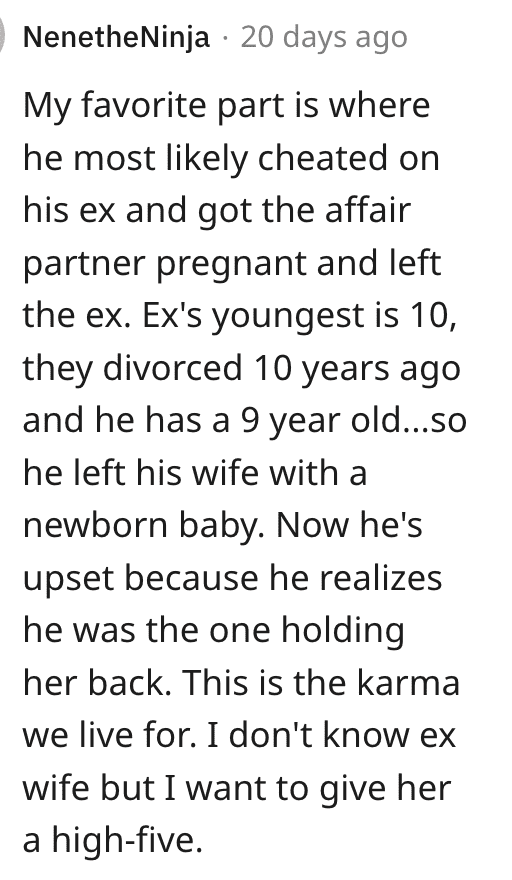 They say he just needs to suck it up. 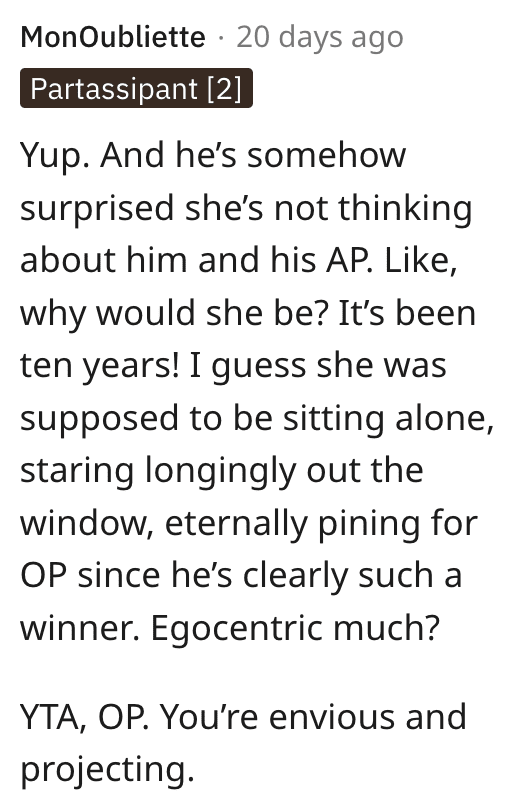 This definitely seems like a care of someone needing to move on – and it’s not the ex-wife.

Have you read a more cringe post on this subreddit? Tell us about it in the comments!