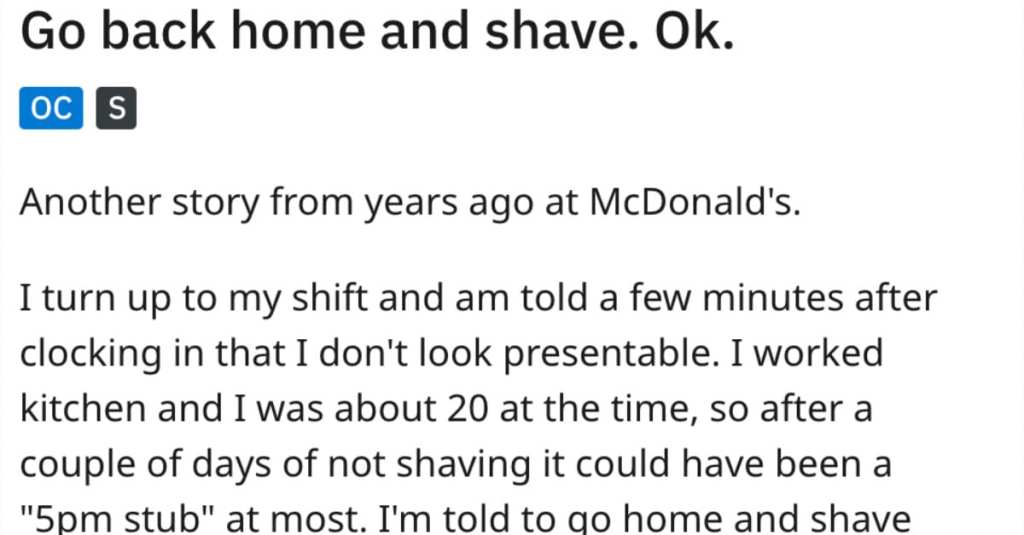 Managers, Be Careful Before You Send An Employee Home For a “Proper” Shave

Most companies that have public-facing or sanitary components also have rules and expectations regarding personal grooming habits. When you sign up to work there, you sign up for pressing your clothes or keeping your hair a certain length et al.

McDonald’s, apparently, likes you to have a neat face.

This kid showed up to work in the kitchen with just a bit of a five o’clock shadow. He was twenty and doesn’t believe it could have been offensive, but anyway his manager asked him to clock out and go home for a “proper” shave.

Another story from years ago at McDonald’s.

I turn up to my shift and am told a few minutes after clocking in that I don’t look presentable.

I worked kitchen and I was about 20 at the time, so after a couple of days of not shaving it could have been a “5pm stub” at most.

I’m told to go home and shave properly for my shift.

He took the manager’s words to heart, staying home long enough for a shower and a shave with the works – his face was perfectly hair-free when he returned (an hour later).

I get in the shower, get a hot towel, shave carefully, I dry it off, put the hot towel on, apply the whole treatment – aftershave, lotion, etc make sure it’s perfect.

I turn up to work about an hour later.

His manager really didn’t have much to say, since having an argument about what was meant by a “proper” shave really wouldn’t have benefitted anyone (and presumably there were Big Macs to be made).

“Where have you been? What took you so long?”

“You told me to go back home and get a proper shave. I hope that’s better. ”

If you’re curious, no. McDonald’s doesn’t have an official dress code policy.

Dress Code – There was no policy in place that required a clean shave.

It would have meant discriminating against the Muslim employees who for religious reasons often grow long beards, or they would have to treat other employees to a different standard.

The policy was that if your facial hair is long enough you may have to wear hairnets which a lot of the other guys wore at work, but I wasn’t offered that solution, because screw me in particular.

It also helps that this kid was only 20 and didn’t really need the cash for the hour’s pay, and a bonus eff you that the manager had to man his station while he was gone.

Was I still on the clock? – No. I was told to clock out, go home and shave, so I did. The way I see it is I lost an hour at minimum wage, which amounted to about £3.33 after tax since I was under 21, so I lost about a beer’s worth of wages.

It being McDonalds they never schedule more than enough people, more likely just short of enough, so at his own wish my manager had to prep and cover my station for the hour while I was having the shower and shave I probably had to skip in the morning to get to work on time – again at his own wish. As you can imagine, the satisfaction was well worth the “tree fiddy”.

I did not protest, I did not plead for him to give me a hairnet.

I probably didn’t want to go to work to begin with, just had to, because bills.

I probably wished I could just call in sick, so when the manager authorised me to f**k off home for a bit more the guy was doing me a favor.

Ah, to be young and carefree again, right?

I miss being 20. Those were the days.