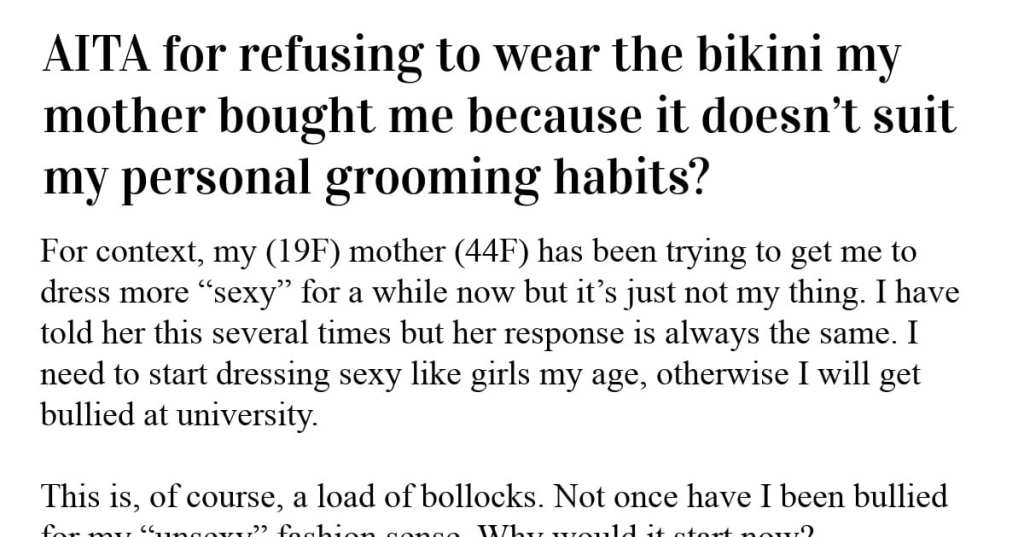 If you’re an adult, or anyone autonomous enough to decide on and execute your own personal grooming habits, I think those habits should be your business and no one else’s – not even a romantic partner’s, if we’re being completely honest.

When it comes to health and comfort, I am a crusader, y’all.

This woman received a bikini as a gift from her mother, but to wear it would mean changing her personal habits.

She and her mother have been at odds over her personal style for some time, so likely her mother knew that the gift was not going to be well received.

AITA for not wearing bikini that mom bought me?

For context, my (19F) mother (44F) has been trying to get me to dress more “s**y” for a while now but it’s just not my thing. I have told her this several times but her response is always the same. I need to start dressing s**y like girls my age, otherwise I will get bullied at university.

This is, of course, a load of bollocks. Not once have I been bullied for my “uns**y” fashion sense. Why would it start now?

She got me a super skimpy swimsuit for Christmas, which pissed me off to no end, but I decided to grin and bear it for the sake of avoiding an argument. I would quietly pack it away and let it gather dust. It’s not like I could wear it anyway as I keep a full bush and the set she got me doesn’t give enough coverage.

When OP decided not to wear her mother’s bikini on a beach trip, things came to a head. Her mother informed her that she needed to do more grooming, lest she be rejected by romantic partners in the future.

OP is sexually active and her boyfriend has no trouble with her choices, but she didn’t feel like discussing it all in front of her family – understandably so.

Recently, we were going on a trip to the beach and I picked my own bikini over my mother’s. She asked me why I wasn’t wearing the bikini she got me for Christmas. I said that I didn’t want to. She blew up at me and called me ungrateful. I told her she needs to listen to me more and not buy things on my behalf just because she likes them.

She asked me what was wrong with the set she got me. I told her that the bikini bottoms didn’t have enough coverage. She told me I need to shave more often but I stood my ground and told her that I like my pubic hair. She said that I need to change my attitude towards grooming or my boyfriend will break up with me.

I desperately wanted to tell her that I am sexually active (she just assumes that I am not because I am an introvert) and that my boyfriend loves my body the way it is but this argument was taking place in the hallway, with my brother (21M) and sister (23F) hearing every word, and I was humiliated enough as it was.

Her boyfriend and brother supported OP, but her sister thinks she should listen to their mom (and seems to agree with her opinions on grooming), so now she’s feeling conflicted.

I was angry and upset and needed to vent so I stormed off to my room and told them that I wasn’t going. My mother’s words really hurt and started to play on my mind, so I FaceTimed my boyfriend for some support. He was so sweet and reassuring. I was in tears when I rang and his lovely words really cheered me up.

I received two separate messages from my siblings. One from my brother asking if I was okay and one from my sister calling me a bitch and siding with our mother. She told me that she was only trying to help and that I would be wise to listen to our mother every once in a while rather than “constantly going against the grain”.

She then followed it up with a rather nasty “Word of advice regarding guys, nobody likes a hairy vag”.

I am so confused right now. My brother and my boyfriend seem to be on my side but my sister is pretty firmly on my mother’s.

Am I the asshole here?

The first comment was about her mother wanting her to “dress more sexy,” which is kind of odd, if you think about it. 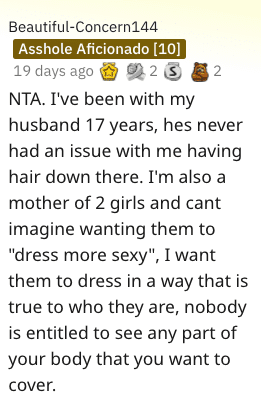 This woman’s advice was to refuse to discuss it at all. 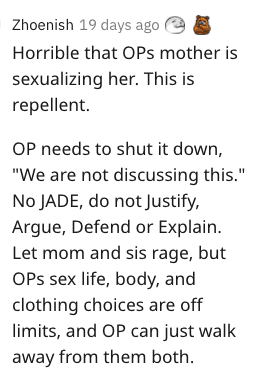 Proof that women have plenty of internalized misogyny of their own.

If you want a guy’s point of view… 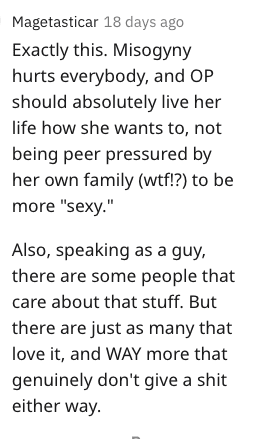 Sadly, this woman is not alone. 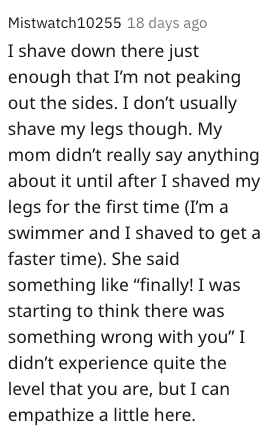 Y’all, I think we should all try harder to just mind our own business, don’t you think? I mean, it’s worth shot…

What are your thoughts on this? Have you had a similar experience? If so, share it with us in the comments!