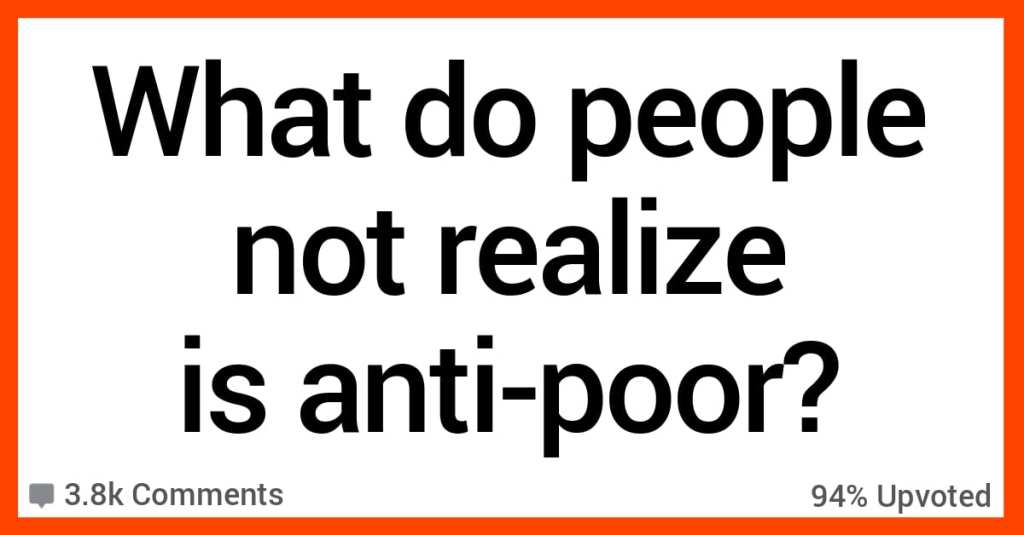 Many People Don’t Realize These 13 Things Are Anti-Poor

People who have never been poor sometimes don’t realize how people who are poor live in a whole different world from the rest of us. It can be easy to close your eyes to it, ignore it, think the government is taking care of people, when you and the people you love aren’t living inside the experience day-to-day.

When you start to delve into the truth, though, it can make your head (and heart) hurt – so if you’re ready to educate yourself on the reality of being poor in the developed world, here are 13 things you might not realize hurt more than they help.

The bankruptcy system was created to encourage economic innovation and growth by providing a safety net to entrepreneurs who take a risk and fail.

So why is higher education — a calculated risk that you’ll become a more productive higher-earning taxpaying citizen — not considered as honorable a pursuit as entrepreneurship?

Today we also have ‘consumer bankruptcy’ that goes beyond helping risk-takers, and allows people to spend indiscriminately and get a bailout.

If we permit consumer bankruptcy (there are valid reasons for it) then loan debt deserves to be even higher on the list of priorities for a society. Instead, we take young adults at the peak of their working career and imprison them at the bottom of the economy, mired in debt. From a purely business/economic standpoint it’s foolish that we allow this; never mind the moral problems with it.

When, and IF, you find a REAL grocery store (not some bodega) try and figure out how easy it is to get to that store without a car.

This right here! I grew up in one of these areas, the nearest real grocery store was a 30 min freeway drive or nearly an hour or more on the bus.

These Carnecias (butcher shop) and Bodegas were all over the neighborhoods. A lot of what they sold was either from Costco or other grocery stores and at a high price no less.

It sucked going to them since we didn’t have a car and they were the only option. There were lots of liquor stores as well, it was a food desert and the last time I drove through my old neighborhood it hasn’t gotten any better.

11. All opportunities are not created equal.

The GRE and other standardized tests.

Contents get sold in bulk to poor countries for a very low price so they can be sold locally.

Things is, local traders that make clothes can’t compete with the volume and low price and get wiped out.

9. Our justice system is nothing of the sort.

The greatest injustice isn’t that the rich have access to good legal representation. It is that the poor do not.

The Common Law legal system is adversarial by design. If you show up under-equipped, then you are going to have a bad time.

The criminal justice system, again by design, is meant to give the benefit of the doubt and the advantage to the defendant. Because the power of a state is so overwhelming against any private individual (even people like Jeff Bezos can instantly be brought down by the sheer might of the SEC), and the consequences of loss of liberty so dire, the system is designed that each and every element of an offense must be proven beyond a reasonable doubt; that, is, a fact finder must be sure. A defendant rarely has the burden of proof and it will almost be to a lower standard of balance of probabilities (or preponderance of the evidence), meaning more likely than not.

The problem with the American criminal justice system is that your prosecution authority is elected. In theory, it sounds great to have the prosecution represent the concerns of the people and be accountable to them. In practice it means you have a prosecution service whose entire mandate is based on convictions to satisfy the public, not justice. Justice isn’t about public opinion.

Requiring references and experience for every entry level job. essentially you need to have had enough money to do an unpaid internship at some point for connections etc.

This is one of the greatest injustices. You could be the “model” poor kid, working hard and getting good grades trying to work your way up. Only to hit this barrier. Heck, I had those internships and the entry level jobs still wanted “5 years of experience”. I was 21, so they expected me to be working in a corporate environment when I was 16?

Also, the obsession with college degrees. Convinced an old co-worker of mine to interview a kid for tier 1 tech support. She wasn’t going to, even though his tech knowledge seemed solid on his resume. Just because he didn’t have a college degree. I pointed out we weren’t paying well enough for a college degree anyway.

He ended up nailing the interview and was hired. To this day one of the best guys I have ever worked with. Getting the job at our company allowed him to afford Junior College and then get a degree from our local state university. So now he has the degree that was originally going to hold him back.

7. And also the bail bond system.

what’s really sad is how it used to make convictions. You spend 30 days in jail unable to make bail and waiting for a trial, then the prosecutor offers you a guilty plea for 30 days of time already served. Whether or not you’ve committed the crime, it’s a no-brainer to take the deal and go home, rather than stay in jail fighting and risking a much heavier sentence.

So you take the deal, and now you have a conviction on your record. Well, what happens the next time you have a run-in with the law? Now you’re treated as someone with priors.

It’s all self reinforcing in a way that enables constant harassment and incarceration of poor/minority communities.

6. That should not be a thing.

Having everything online at a click of a button is a wonderful convenience for many of us, myself included. For others, it’s an insurmountable barrier. The is a huge, huge population out there slipping through the gaps of the system simply because they don’t have regular access to internet and mobile phones.

Public libraries have been holding it together by a thread for years as the only point of online contact for millions, and now they’re been cut way back. Budgets are slashed, libraries closed, equipment outdated – and even if they are able to access a computer, a lot of people don’t have the first idea how to use one.

It’s also one of the many, many reasons it’s an astonishingly a$sholish and tone-deaf thing to judge people living in poverty who have “fancy” smartphones. It’s almost impossible in this day and age to live without some kind of internet connection unless you’re already established/comfortable.

4. They’re not for teenagers, that’s why.

Well a lot of benches in cities are designed to stop homeless people sleeping on them so they are forced to sleep on the floor.

Also there’s a lot more anti homeless architecture just look around your city and you’ll see some of it.

2. It’s getting harder and harder.

The push to be cash-less.

Anything that’s required by the government and entails a fee. Things like IDs should be free to get, then a small fee if you lose it before it’s time to renew it or you need rush processing.

Along those lines, laws that aim to eliminate something by making it more expensive. Sin taxes and “Saturday night special” laws are a good example.

Learn something new every day – and when you know better, do better.

Tell me what you’re doing these days to broaden your educational horizon. I want to hear about it in the comments!