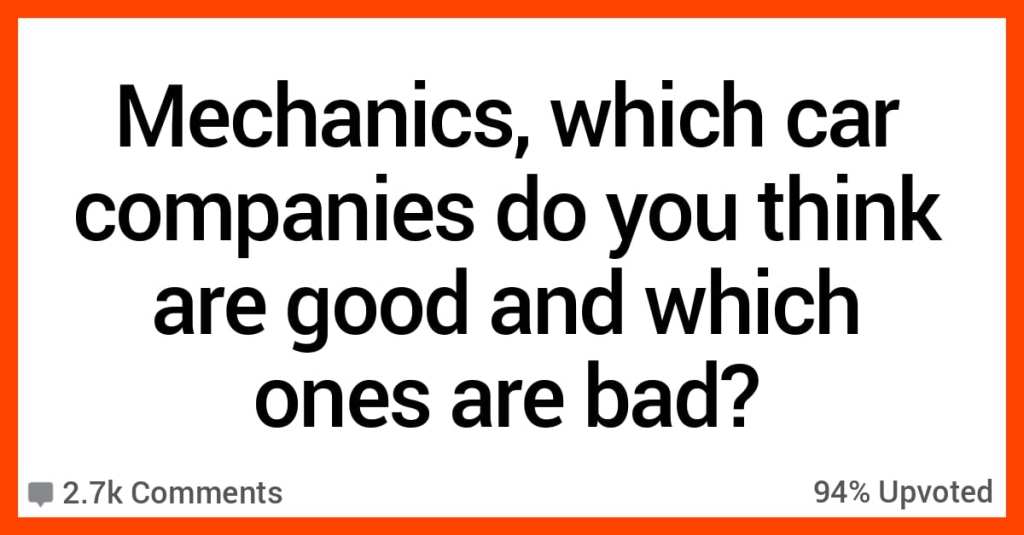 Buying a new car (or a used one that’s new to you) is a complicated process.

You have your personal opinions about what makes and models you like and no matter how much research you do, you’re gonna find conflicting information about everything.

That’s why we’re in luck today! Because we’re gonna hear from people who work on cars for a living about what we should be looking for when we look for a new ride.

Let’s get educated by folks on AskReddit users.

“My honest answer is that any car is good only thing you have to respect is your wallet. For example you buy a used Echo for 2k you know every part on an Echo is a bargain even a used engine/transmission. So you can have a certain Piece of Mind

Now problem is with cars that seem “Not High Maintenance” but are actually super high maintenance cars such as the Toyota Prius/Mini Coopers/fiats/Smarts and or any Hybrid/Electric because they’re sold as low maintenance reliable cars but parts on those are extremely expensive. Buying those cars 2nd hand is close to insanity.

Another quote told by a 30 Year mechanic. If you don’t have money for the new car you have less for the older car. Cars lose value, parts don’t and in some cases even gain value.”

“My dad is an auto mechanic and advocates Toyotas and Hondas for your standard commuter.

“For trucks and SUVs I’dd say go with ford though the Tacoma is on par with the ford ranger. The worst car ive ever seen is a fiat or mini vehicle. This includes anything made by fiat. Like dodge Chrysler and jeep for example.

If you want a good car go with Toyota or Honda. Chevy has been going downhill in the truck department for awhile but their traverse is a decent vehicle. Ford cars suck royally this includes their mustangs.

While car companies vary widely in dependability and efficiency the main factor to a car lasting is taking care of it but, even then its not a guarantee that some vehicles will last.”

4. Something to think about…

It’s starting to rust and I’ve replaced the clutch three times, but I still get 30 mpg on the highway.”

Solid, Toyota, Subaru (although if buying used ask about the head gasket they do go bad), Nissan is usually good too.”

“My dad was a good hobby mechanic, as well as a race car driver, and the only company he DESPISED was Fiat.

He loved Mazda, and would drive one whenever he had the choice.”

“I’m a mechanic and I’ll drive anything. You can’t go wrong with a Toyota or a Honda, boring as hell but they’ll run forever. I always tell people to look into repair costs and service fees.

Anything uncommon like rear engine or really tiny cars are probably going to be expensive to repair like the mini also sold by BMW and that stands for “bring money with you”.”

“Stay away from the Nissan Rogue, Murano and Kicks. All of them are hot garbage. The CVTs on those are unreliable, needs constant maintenance, and even with maintenance it will die on you when you need it the most. F*ck Nissan!

Also run from any Jeep. Jeeps are worst than the Nissan Rogue. Parts are expensive, and it will be always at the shop, always. Even brand new! Dont fall for “Wranglers are the best”. All Jeeps are bad. Youve been warned!

Finally, dont get any BMW. Yeah youll find some very cheap and from recent years, there is a reason for that.

Need something cheap and reliable? Get a Kia Rio or Forte

Need something more fancy and reliable? Toyota all the way.”

“Unless it’s a division or exact company of Toyota, Honda, Mazda or Ford. Stay the hell away from it.

You’re asking for nothing but problems.”

“A few of my good friends are mechanics.

The vehicles that roll into the shop the least: Nissan and Toyota. Toyotas will rust to sh*t fairly quickly, but they’ll stay intact mechanically. Nissan are the best currently, I guess.

The ones they see the most are Ford and GM, as well as pretty much anything from Europe.”

“They’re all nuts and bolts. And they all break eventually.

As far as repairs. Anything German is probably gonna be your most expensive. Followed by Chrysler/fiat. And Toyota. Toyota has a reputation of being reliable but that’s mostly because people in my experience who have Toyota’s tend to maintain them.

“Jaguars are notoriously unreliable mechanically, but I guess if you can afford a Jag you don’t really care about how much you have to pay your garage.”

“Toyotas are awesome- but keep is to the cars, not the suvs or trucks so much except those older trucks with lwtters and numbers for names. Good stuff. A toyota avalon from the early 2000s will last a lifeime with basic maintinence.

A corolla or camry is economical AF, but some were built annoyingly so you habe to drop half the front wnd to replace certain engine parts.

Homda accord is a lifeline until it rusts out from underneath you, starting at the rear wheel wells.

The 1990-95ford escorts had a joint thing with Mazda, so their engines are practically bulletproof. Hold onto thwm.

Jeeps ARE trash EXCEPT the inline 6 4.0 motors. Worth fixing but watch out for a cracked block. Resellers can hide them.

Dodges are pretty bogus except the magnum motors. I have a 6cyl 3.9 that is no slouch and headed to 300k.

The single best motor you can get is a a straight 6 out of old nissans … Think they are called Jz2fe or something like that. They are the perfect engines. If you find one in a junkyard, grab it. Dont pass it up. …”

That f*cking car, in 6 months, had the distributor cap blow up, needed a new windshield, and about 6 other expensive things before blowing a god d*mn head gasket on my way to work one morning. After that I financed the most reliable seeming car I could afford–a Mazda protégé.

Holy f*ck did I love that car and did it love me. I moved to a city where I didn’t need a car, so I sold it to a friend who got several thousand miles out of her and made a tribute on Facebook after she died. I’ve since moved back to a car-driving city.

Bought two more mazdas and loved the sh*t out of both. I’ve driven every vehicle you can imagine, from a 40s international truck to a ’92 3/4 ton chevy to my partner’s lifted Tacoma to a yaris to a 90s altima. I currently drive a Mazda3 and will honestly never buy anything else for a daily driver until the day they stop making manuals.

The single most underrated cars out there as far as I’m concerned.”

Do you have any good advice about which car companies are good and which ones are bad?

If so, please talk to us in the comments. Thanks!