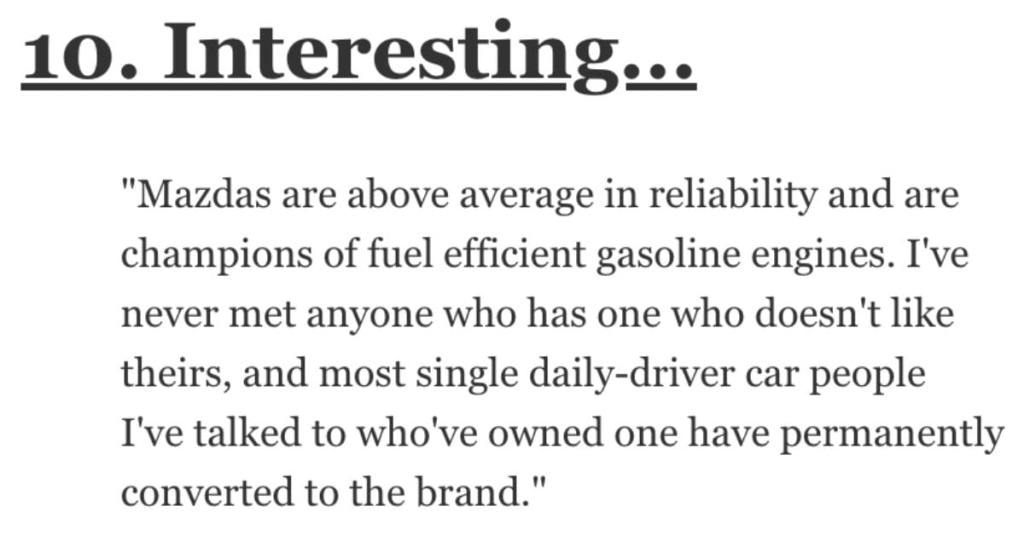 Mechanics Weigh in on the Good, the Bad, and the Ugly When It Comes to Car Companies

This summer, I finally sold my old car and decided to buy a new one.

It was a pretty interesting process and I asked all kinds of friends and family members their opinions about different makes and models.

I finally made an informed decision and it’s all good. BUT, I do wish that I had some mechanic friends out there, because these guys and gals really know their stuff.

Here is some good car advice from folks on AskReddit that could help you out next time you’re looking for a new car.

If someone offers to give you one for free, take it and get $100 scrap price for it!”

“Suzuki belongs in the decent brands. Good value for money, cheap to fix, easy to work on, but not as full featured as others.

My wife had a 2011 swift that did 200,000km with zero issues and we now have a Vitara turbo that has been nothing short of fantastic as well, a few of my friends have had swifts that I’ve worked on/services as well and they can take a flogging.”

“Buy a Honda or Toyota or their luxury counterparts, Acura or Lexus.”

“When I was deployed to Afghanistan we had this little FOB truck that was a right hand drive Diesel Toyota Hilux that we drove for transporting stuff around the base as it was more practical than an MRAP.

We beat the absolute piss out of that thing. We never serviced it and it drove almost exclusively off road or on dirt roads. Didn’t give us so much as a hiccup.”

Avoid german cars unless you have lots of $$$

After that it gets a little more open for interpretation and depends on what kind of vehicle you are looking for. That said, you can never go wrong choosing a Toyota.”

We even pulled the engine out of a 77 silverado with 377,000 miles that we had and put it in an 85 blazer we rebuilt from the frame up.

Those engines could take a grenade and keep running.”

“The majority of my family is mechanics and they always say “never buy a Dodge!” Two work for an auto parts store and says they’re the ones they get the most calls for, about parts and repairs.

My family has VWs and we all love them. The older ones tend to be built better though, but we find they’re good quality.”

8. Bottom of the barrel.

“Fiat/Chrysler is pretty much the bottom of the barrel, with GM not far behind. These brands can be ok if you are trying to get a performance car such as the Charger SRT Hellcat or the C8 Corvette, however for normal cars they are pretty much the worst

European car brand like Mercedes, BMW, and Volkswagen are ok, but expensive to buy and VERY expensive to repair.

Toyota, Honda, and Mazda are all usually pretty good.

Ford is ok as well. Less reliable than the Japanese competitors, but generally cheaper to buy.”

“Stay away from Mini Coopers, Land Rovers, and Lotuses.

Those have to be the WORST for reliability and maintenance.

As for good ones to buy, Ford, Volkswagen, Volvo, Chevrolet, and Toyota are some of the best for maintenance, repairs and reliability.”

“Mazdas are above average in reliability and are champions of fuel efficient gasoline engines.

I’ve never met anyone who has one who doesn’t like theirs, and most single daily-driver car people I’ve talked to who’ve owned one have permanently
converted to the brand.”

“Buy a Honda or Toyota.

Absolutely never touch anything German beyond a luxury lease from new. If you need a truck to do local heavy load work, buy a Ford.

My dad was a mechanic for 30 years. Mostly BMW He was an ASE master tech. The dealership he worked for also owned a Toyota dealer.

The year before he retired he got me, my sister, and my mother a heavily discounted Toyota corolla because quote “he never wanted to fix a car again”.

“I will preface this with all manufacturers make bad models. There are always lemons and there is always those few cars that make it 500,000 miles because everyone on the assembly line was sober that day. Also, even the best built car can be made unreliable if basic maintenance is ignored.

Import cars like Mercs, Audi, Land Rover, BMW, etc. They are great to drive and are awesome so long as you are leasing them. If they break, it is someone else’s problem and I assure you it generally will be an expensive problem. European cars are a very different school of thought from design to assembly to repair.

Hell, BMW has a few models with alternators that are cooled with engine coolant that is as hot as the engine. The VW beetle requires you to basically pull the front bumper off for an alternator replacement.

The Mini (a rebadged BMW) is 10 gallons of crap in a 5 gallon pail. It is hard to work on, expensive to repair, and completely designed with input from Satan himself.

For US, as much as they can be called US, domestic brands to definitely avoid in my book is Dodge, Jeep, Chrysler. The parent company has been bought and sold more than a prostitute. I think Fiat owns them this week.

The QC is lacking and automatic transmission issues abound (The RAM trucks come to mind), electrical issues(generally body control modules), and engine longevity have been and continue to remain an issue. The reliability that they may have had in the 90’s and early 2000’s is a distant memory.

Chevy isn’t doing so great and neither is Ford. Everyone’s stuff is getting more difficult to work on and requiring more and more special tools and software.

Nissans have been going downhill but the CVT transmission is problematic.

Subaru is kind of in between like/dislike for me. The boxer engine is nice but overhauling it can be a bit cramped. The good news it that they made it relatively easy to remove/install.

If you want to look at reliable manufacturers I would argue for Japanese and Korean vehicles. Kia is getting good, though sometimes the replacement parts cost can be a bit expensive. Hyundai has gotten much better. Toyota is pretty solid although the initial cost is higher. Honda is pretty solid too.”

Do you have any good advice you can give us about cars?

If so, please share it with us in the comments. Thanks!