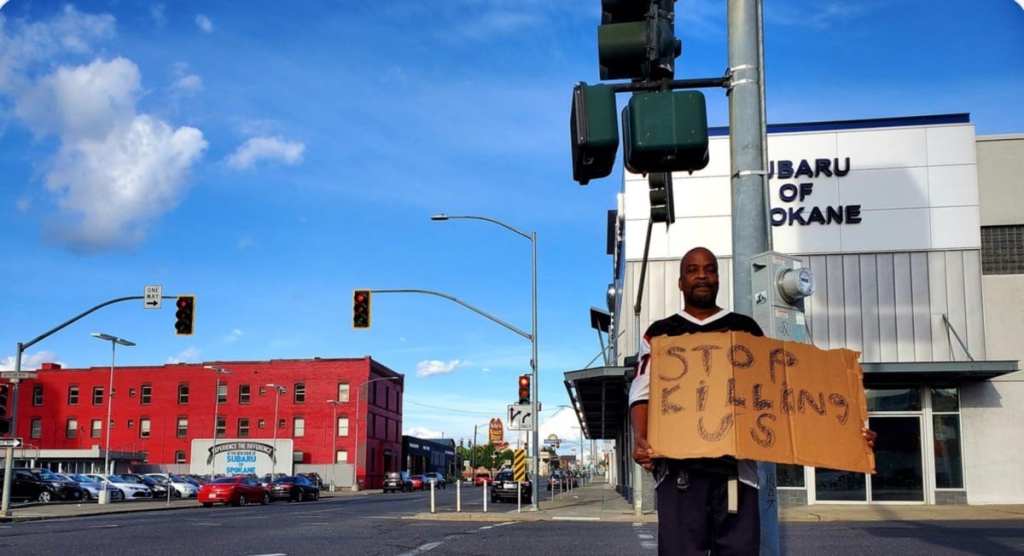 No Protest Is Too Small and These 15 Photos Prove That

We’ve seen thousands of people take to the streets in the past weeks, protesting against racial injustice within law enforcement and other inequalities. What we see in the news are mainly marches, many peaceful, some not so much, in our major cities involving big crowds. There’s power in numbers, right?

The crowd in Philly is…unfathomable? I can’t even guess. Unbelievable. pic.twitter.com/02ZIcyTXW5

In rural areas, in less-populated, less-diverse towns, a single sign or act of defiance can be just as loud. We have 15 photos that prove it.

Saw this guy peacefully protesting BY HIMSELF in my small little conservative white town so I bought a nice cold water and thanked him for being courageous. pic.twitter.com/6nvMRXLOQ7

2. One Latino man in Orlando.

3. One girl in Charlotte.

She doesn’t need a crowd.

All it takes is a posterboard and a sense of justice.

Saw this man protesting alone. I’m with ya dude ✊🏻 pic.twitter.com/0SvFr6c4Ua

A lone protester in the heart of a small southern city. Thank you. from pics

My mom did her own march since none of her friends wanted to join her ❤️ pic.twitter.com/ErL9NUyeoe

He refuses to wait for change to happen.

I saw this guy peacefully protesting alone. No one – no friends or family were with him supporting what he was doing. It honestly takes a lot of courage to do this and I was so proud to see someone standing up for this, especially to be able to have done it alone. 🖤 pic.twitter.com/5Nok13eazF

Please take all my money.

Standing alone in the highest visibility place he could find.

Ocean Shores, Washington, in the middle of the small town traffic circle. No voice is too small. from pics

This woman is out here protesting alone in the heat in Antioch!! I love her!! #BlackLivesMatter #SayTheirNames pic.twitter.com/g8slmN4Qa6

Changing the world is always uncomfortable.

By herself wearing a mask, God bless her.

Shoutout to this lady on Virginia Beach BLVD she was protesting by herself an hour ago💯 pic.twitter.com/KP1yjRRnOL

My mom, protesting by herself in Boynton Beach, Florida. pic.twitter.com/n3pdLg51vs

A man in Beatrice, NE protesting by himself. No news outlet to show support. Will keep posting when I find legitimate stories. Share the small towns across the world. #smalltownsupport pic.twitter.com/COrNEVyVlh

A single voice, a powerful message.

This is Darren Rabb, 51, who moved to Spokane a few years ago. I drove past him standing alone downtown. He said he's never been involved in activism before, but this wave of protests feels different. "It's time for change. It's time for change," he said. "And it's coming." pic.twitter.com/h9X3wI3qIj

When these people couldn’t find a protest to join, they made their own, and that’s how change comes about.

It may be uncomfortable and lonely, but we shouldn’t let that make us silent.