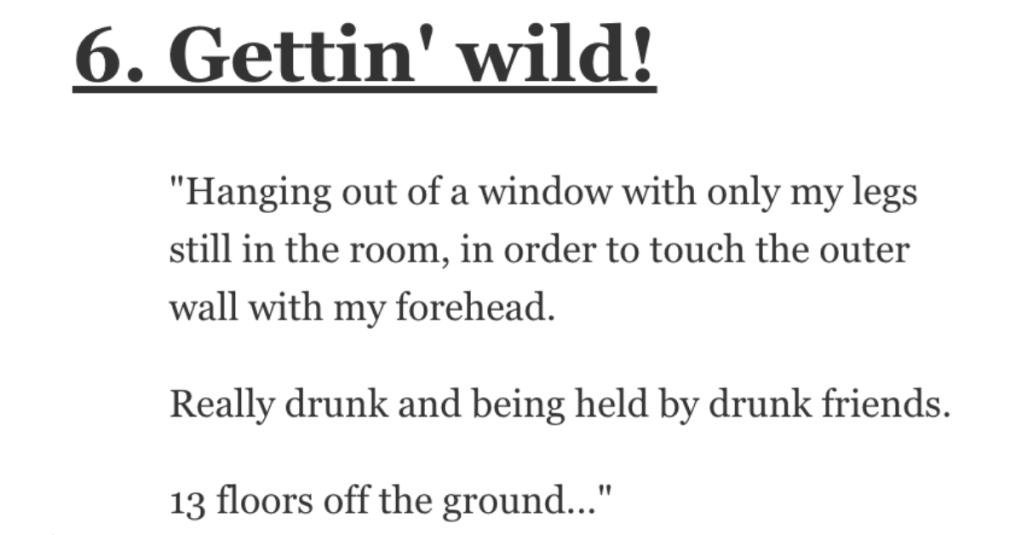 Do you remember the good old days of Truth or Dare from when you were a kid?

Or hell, maybe adults still play it, too? They probably do, knowing what society is like these days…

Anyway, the point of the game was to really push the limits and see how insane things could get…

AskReddit users talked about how far they went in games of Truth or Dare. Let’s take a look.

“I was dared to grab a girl’s bo*bs and let her grab mine too.

I was a fat kid, but also girl bo*bs are great so it evens out.”

“In grade 6 I was dared to lick a fence in the playground.

The day after I had this pleasant little disease called ‘Thrush’.”

“I almost drowned in my friend’s duck pond because they dared me to swim with the ducks.”

“A female friend and I chose dare together.

Our friends said take off all your clothes and run across a recently frozen pond.

We did it but man was that ice cracking.”

“Rowed across a lake naked at night.

During the expedition some random campers saw a “white thing” floating across the lake and shined a flashlight on me.

They busted up laughing. I hid at the bottom of the canoe until they turned their light off.”

“Hanging out of a window with only my legs still in the room, in order to touch the outer wall with my forehead.

Really drunk and being held by drunk friends.

“Two extreme opposites that stand out are:

Roly-poly down some stairs.”

“After a looooooong night of drinking, a small (five-ish?) group of us decided to play truth or dare as the sun was coming up.

At some point, I was dared to streak down two city blocks. I did so, in cowboy boots and covered in mustard from an earlier dare. It was cold, I was bad at running due to drinking and smoking cigarettes all night, and I was pretty sure I was going to die.

Alas, I lived and ended up with a brutal hangover later that morning.”

“I jumped over a snowball and broke my nose.”

We decided to play truth or dare, and at some point all of us were in just our underwear, and later completely naked.”

“Put my d*ck in a cantaloupe in front of girls.

Should’ve microwaved it for warmth first.”

“We, a group of good friends of 5 – consisting of three females and us two males – had a game night with classic quiz and card games plus drinks of course.

It was a light affair with reasonable alcohol consumption since we are in our mid- 20s.

Then suddenly my buddy pulled out some Vodka and made all of us drink shots in “quick fire mode“. One of the girls insisted on playing Truth& Dare.

It ended up in us stripping our clothes, giving lap dances to each other, *ss spanking and some making out.

A real passionate night between friends. Our little secret.”

“Was in the Marines, at a party and was dared to run outside and dance a jig in the middle of a generally suburban street…

Wearing a sombrero and naked except for my white socks. I did a little river dance while they completely lost it from the balcony.

Do you remember the farthest you went during a game of Truth or Dare?

Confess your sins to us in the comments!