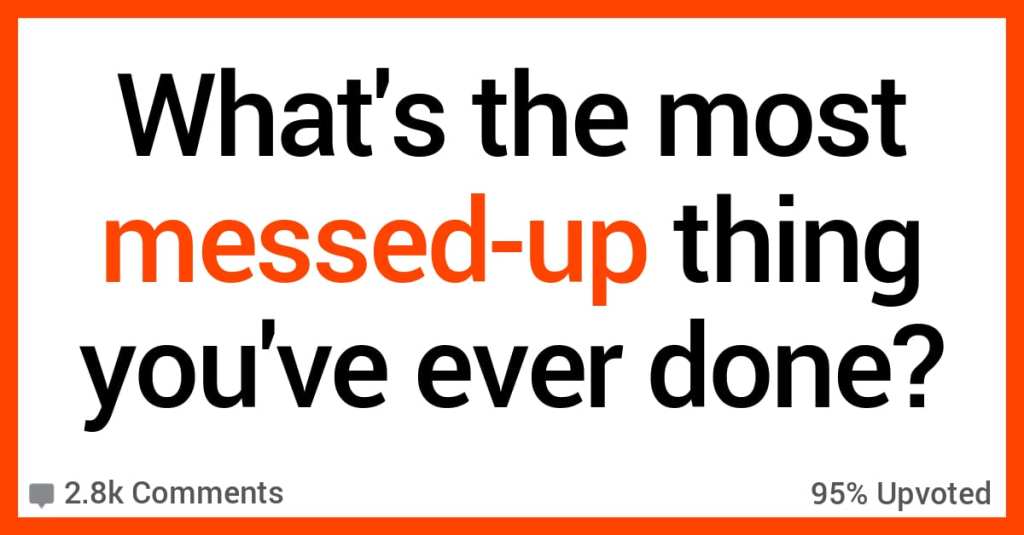 I’m talking from all of these people who are about to admit the most screwed-up things that they’ve ever done in their lives.

And I think we’re in for some real interesting stories, my friends…

AskReddit users share the most messed-up things they’ve ever done.

“In college there was a guy who was a real *sshole to me.

I avoided conflict at all costs but I went to a party at his apartment and he had all of his sports trophies on display. I stole one came home and burned it in the fire place.

Later that year he ran for faculty rep and nobody ran against him. The ballot had 2 options his name and “no representative”. I had a lot of friends at the time and I convinced enough people to vote to have no representation.

So he lost to nobody and we didn’t have a rep for our faculty for the first time in our 90+ year history. I was pleased at the time and now I am ashamed.”

“Dropped an N bomb in a non joking way in front of a black friend of mine.

I was drunk, and in company of guys who I knew were low key racist. Trying to be edgy, etc.

Was like 10 years ago and it still haunts my thoughts on a weekly basis. I hate to think that I’m part of what he thinks about when he reflects on times he’s experienced racism.

But there’s really no defense for what I did.”

“Took a sh*t on a random person’s car in a mall parking lot, then wiped it over the windshield and doors with paper towels.”

“I was performing a dance routine on stage in a theatre in my home town with a dance school. I’m maybe 8 or 9. A painfully anxious introverted extrovert.

It was my first night and I had only been in the dance class a few weeks and I was really, really nervous.

So we are there standing back to back, arms crossed, me and this other girl. I can hear the que, the curtain is about to go up and she says to me “don’t you mess this up and embarrass me, my family are here tonight”.

Curtain goes up. I slide my foot back and trip her. She falls, flat out. On stage. In front of her family.

And I’m still not sorry…”

“Dumped a girl I had been dating for about 6 months b/c when I met her older sister I realized I liked her more, we (My gf & I) even joked about how she (sis) & I had more in common.

So I took her up on it, said I don’t want to see you anymore, I want to date your sister.

Did not go over well.”

“When I was about 8 years old, one of friend’s parents paid me $200 to break their kid’s leg so that they could get him to stop playing soccer.

So I convinced him to climb a tree with me and got him to go out to a branch that could support me, but not him.

7. Hope you learned a lesson.

“As a kid I mimicked the limp of a old war veteran who was injured fighting for our country.

He caught me and I never felt so f*cked up.”

“I’m a military veteran so any conversation about the absolute worst thing I’ve done could get overly complicated pretty quickly – but honestly the period I feel the most guilt about would be right after I got out of the Army.

I’d been in an all-male max-testosterone environment for 4 years, and suddenly I was a college student, surrounded by freshman girls who were away from home and parents for the first time. I was several years older, vastly more experienced, and still carrying a military mindset. I was very mission and goal-oriented, and not very interested in consequences.

I really used a lot of people. I never hurt anyone, but I was manipulative, deceptive and ruthless, and I was careless with the feelings of girls who deserved better.”

“After my buddy graduated high school he got a bunch of wallet size photos of his senior photo.

He disappeared and we hadn’t seen him for a while or heard from him so me and a mutual friend decided it be funny if we wrote brutal phrases on the back of them and distribute them in the mailboxes around the neighborhood.

We wrote phrases like “I won’t tell your wife” and “till next time <3” and the simple but popular “I love you”We thought it was hysterical at the time.

Unfortunately the police ended up tracking him down and asking him about it. Looking back that’s pretty messed up.”

“I have had s*x with escorts.

Not too bad, but my family wouldn’t approve. I and they were clean and practiced safe s*x. I don’t regret it, especially as I learned how to be more confident around women and bedroom activities.

But I know plenty of people who’d lord it over me. I really did just want to know what it was like to experience s*xual intercourse.

But yet I feel it’s a curse if I did do it or never did.”

“I got a parakeet as a Christmas gift when I was 15.

Come April I have a new boyfriend I’m completely enamored by. So now I spend all my time with him completely forgetting to spend time with my bird. His squawking starts to annoy us so I move him next door to the empty room.

Couple days go by and I remember to check on him and he’s dead at the bottom of the cage. I starved him to death because I was hung up on my boyfriend. We’re married now 10 years later so there’s that but I still feel awful.

And my husband likes to remind me anytime animals come up in conversation. R.I.P. Frankie.”

“When I was a teenager, we really enjoyed destroying property. So pumpkin smashing during Halloween was always like Christmas for a group of mischievous teens.

There was a family that had a whole bunch of pumpkins on a sheet, right on the curb. Probably 20 of them. Nice neighborhood, but I think they were selling them. Had a little girl that out front with them during the day.

They left them out of after dark.

I pulled up, got out and loaded every single pumpkin into the back seat of my car. Smashed them all over town. I admit, I do look back with some regret, thinking about that little girl coming outside to see an empty sheet the next day.”

“After college, I went drinking with some friends, and after the bars closed, we walked into a house party.

The owner didn’t like the jersey I was wearing and told me to leave. He followed me outside with his roommates and talked a bunch a trash. I walked home, waited about an hour, then walked back and keyed two of the cars bumper to bumper.

“I had a huge argument with my mother during high school and one of the outside cats who gave birth had kittens and I threw one of them at the wall out of anger and frustration and the kitten eventually died.

I hate myself for that every single day. I feel so bad and I just can’t believe I did that. Whenever I attempt suicide due to depression, that memory and guilt of killing a helpless little kitten pushes me to almost kill myself the most. I can never forgive myself for doing what I did.

I’ve never told anyone in real life and my mother is the only one who knows I did that (because she witnessed it).”

“When I was a young teen, a friend and I liked to steal stop signs. We stole I don’t know how many, it was a lot though.

Well, we stole a sign, and not a day later a car crash happened because someone didn’t stop. No one died, but there were injuries.

I guess that came back to bite us in the *ss as that summer we worked for the city. What did we do? Replace the stop signs.”

What’s the worst thing you think you’ve ever done?

Tell us all about in the comments!

We won’t judge you…too much…