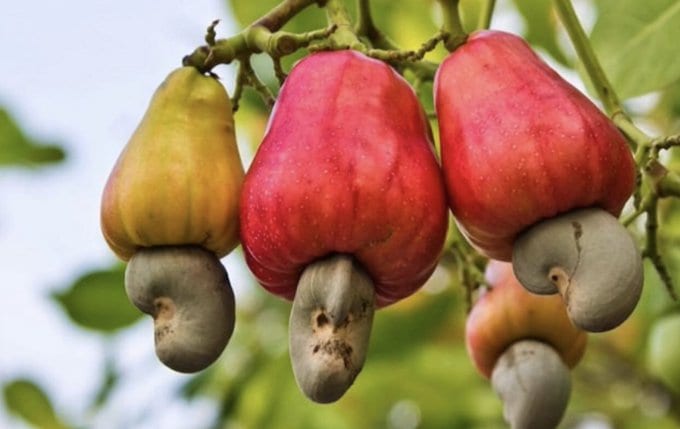 People Can’t Get over Where Cashews Really Come From

If you’ve never seen how cashews grow before, prepare to be deeply confused and a little scared. The truth is so weird that people on Twitter can’t stop talking about it.

Nope, that would be the fact that they grow from these things.

i was today years old when i learned that this is how cashews grow. pic.twitter.com/nPufY9M4Bl

Excuse me, is that a nut or a monster?! I don’t know anymore.

That apple-looking thing is apparently called a “cashew apple,” which grows from the branches of the cashew tree. The shell below the apple contains the actual cashew.

hello i need everyone to look at how cashews grow. ON AN APPLE. no wonder they are so damn expensive. pic.twitter.com/IALr0FaGwT

To get to the nut, you have to pick the entire thing, cashew apple included, from the branch. Then you pull off the shelled nut, dry it, steam it, freeze it, and boil it to remove the shell. The shell is filled with caustic acid, so this is no joke—in fact, the extracting the nut is so grueling and dangerous that picking cashews is sometimes used as penal work in south- and southeast Asia where they grow.

Cashews are delicious and healthy, but are they really worth all this effort? Whose idea was this, anyway?

People on Twitter are understandably freaking out about the news.

“Who knew cashews look like angry, old men yelling at you to get off their lawn as they grow?” one user wrote.

Wow! Who knew cashews look like angry, old men yelling at you to get off their lawn as they grow? They taste so much better than they look! https://t.co/EOMBqd7HAS

Others pointed out that the middle cashew in this photo looks like it has a face.

I thought the one in the middle had a face for a second and I panicked wow ? pic.twitter.com/OcyTd2vMF2

FYI, you can eat cashew apples, too. The flesh is quite bitter, though, so it’s best to process it for jam or juice.

Now, excuse me while I go have nightmares about cashews for the rest of my life.