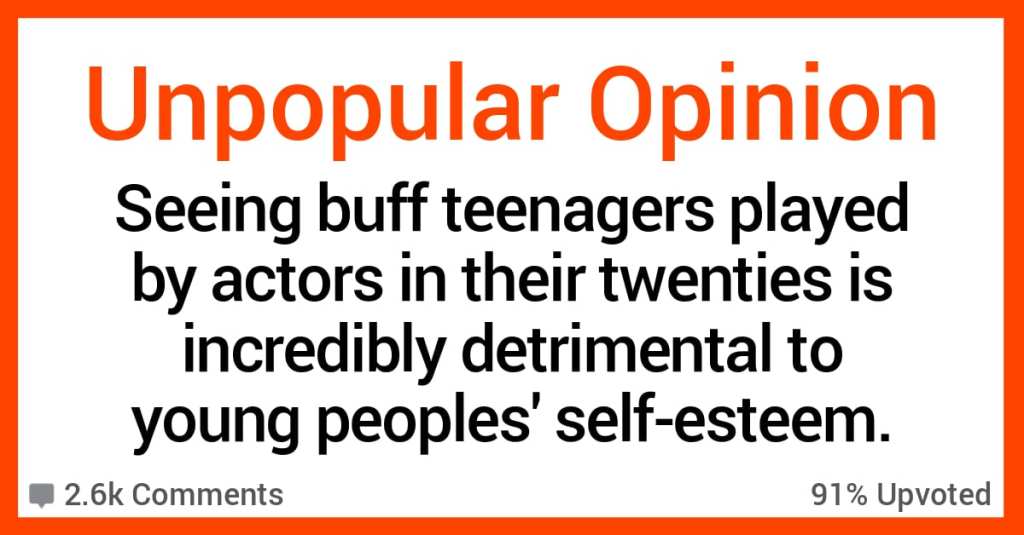 I’ve always found it to be pretty funny when I see someone who is obviously in their twenties (or maybe even in their thirties) playing a teenager on TV.

They always look way too old AND they’re usually very good-looking and in great shape.

And we all realize that it looks a little ridiculous…

But one person on Reddit thinks that these representations are actually harmful to young people. Take a look at what they had to say.

The buff teenagers played by twenty year olds are incredibly detrimental to teenager’s self esteem. from unpopularopinion

And here’s how people responded to these statements on Reddit.

“I know buff teenagers exist but honestly the guys at my school are either fat or skinny and we all have acne, guys and girls.

I wish that was put in movies.”

People don’t pay good money to see the ordinary they want the extraordinary.”

Too many shows and movies display people having everything figured out or overcoming their core flaw in their teens – which rarely ever happens.

More shows and movies need to be about after high school. Early career, alternatives to college, relationships outside of one’s hometown, etc.

Stop idolizing youth and celebrate what comes after.”

“Going into high school my expectations were unbelievably high due to Hollywood. I legit thought every high school party was going to be like Project X every night (I wish lmao).

High school is not as fun as Hollywood plays it out to be. Yes, it’s an important, and sometimes memorable, part of your life, but it is in NO WAY shape or form how magical and spectacular it is in Hollywood.

They legit make it look like it’s the best time of your life when it’s FAR from that (unless you peaked in high school, which is just pathetic).”

I’m 16 so these guys are only 1 or 2 years older than me, but it had me feeling almost insecure about my body, because pretty much every guy in it is like 6ft+ with very idealistic bodies (abs for days with massive biceps, nice tans etc) and multiple times I had to remind myself that these actors are probably 6 or 7 years older than me.”

“This happens to everyone, and it sucks.

Movies obviously don’t want to feature unattractive people, since it’s bad for advertising, so it will be hard to stop this from happening.”

“Don’t even get me started on all the women on those shows that are supposed to be 15-16, yet their bodies are extremely developed, and they are ALL really in tune with their s*xuality.

It’s so disturbing to watch women that are older than me play characters that are younger than me making out/having s*x.”

“Yep, most “teenagers” in movies are easily in their 20s and early 30s. Not healthy at all for many teenagers growing up.

Another problem is the steroid use in Hollywood so actors can get in shape for certain roles. Hugh Jackman isn’t putting on 30 pounds in 3 months for Wolverine without touching steroids. Also, kids have an unrealistic idea for what it takes to make it as a professional athlete.

Sorry, but if you think you’re going to be the best of the best without dabbling into steroids and PEDs you’re fooling yourself. That’s if you’re even athletic enough for your sport in the first place. You can buy all these drugs online.

There’s even a page here on Reddit that teaches you how to do a proper steroid cycle. I don’t suggest it and nor do I condone it.”

“Honestly? Everything is detrimental to teenagers’ self-esteems.

It’s all drama and self-loathing and self-centeredness and uncertainty.

Besides, blaming movies and shows with bad casting choices is too shallow, IMO. Like, if teens are having it bad with their body image and is related to 25 yo bombshells playing 16 yo,one should look deeper to see the root of the problem.

Maybe that teen is being bullied, suffered abuse, lacks reliable guidance and role models, already has a sh*tty self-esteem, or all of those.”

“Everyone on TV is great looking.

Wanna see the most beautiful people in the world , watch Hallmark channel or a Lexus commercial.”

That’s how it’s supposed to be though. I was reading an article and it said that teenage boys aren’t supposed to be doing heavy weightlifting because their bodies are still developing.”

“I’ve noticed that this is an American and Canadian thing. European movies have teens with crooked teeth, acne, scrawny.

Not fully developed, super confident girls and a bunch of weight training guys who all have six packs. The people look like real everyday people. In our t.v shows and movies they have full-on make up in scenarios you shouldn’t be wearing any.

Like working out or in the shower. Lol But I guess that’s Hollywood for Ya.”

“Yup – John Travolta and Olivia Newton John were 23 and 29, respectively, when they filmed Grease.

And it was pretty laughable that they were supposed to be high schoolers. Stockard Channing who played Rizzo was in her 30s!”

What are your thoughts about this?

Are these body images that kids see onscreen bad for their self-esteem?

Sound off in the comments! We’d love to hear from you!