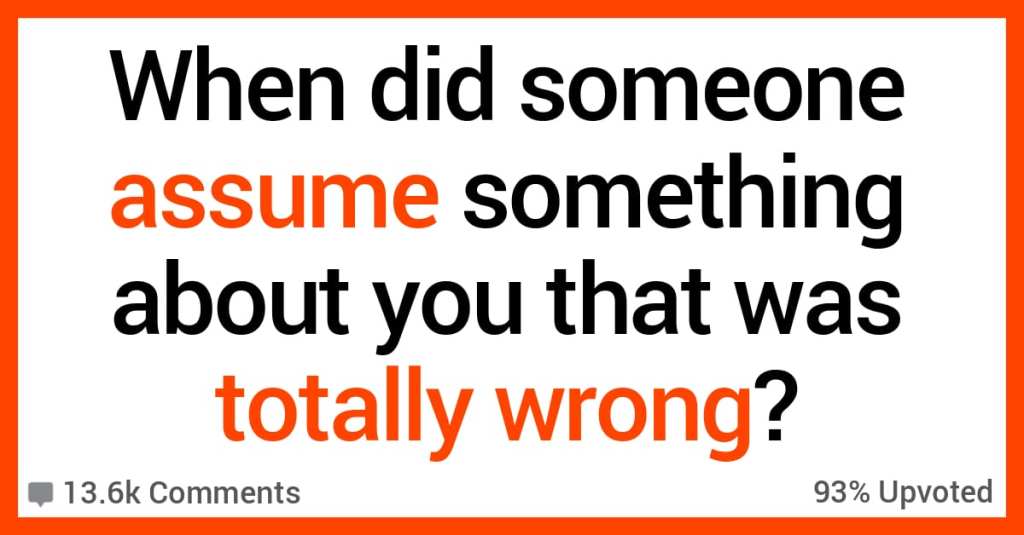 If I’ve learned anything in my years, it’s that you should never assume ANYTHING about ANYONE.

Because, if you do, a lot of the time you’ll just end up looking pretty foolish. And, as the saying goes, you can never judge a book by its cover…

AskReddit users went on the record and shared their stories about when people assumed things about them that were totally wrong.

“People look at me and think I’m either a marijuana enthusiast or addicted to something.

The truth is I’ve never done anything, I guess I just dress like a skater and for a lot of my life operating on at most five hours of sleep.”

I’m almost 26. It happens at work a lot and it can be annoying.

Also this is more recent but I just got a new car and people always ask if my parents bought it for me. Understandable but no, I worked hard for it.”

“That I’m a lesbian.

I guess my short colored hair, lack of interests in guys in high school, and eccentric clothes don’t help.”

“I lost all my hair and eyebrows during chemo.

And someone I hadn’t seen in a while asked when I was getting my Make-a-Wish, thinking I had shaved for the hell of it. They had no idea I actually had cancer.”

“People seem to always want to talk about kneeling for the flag and other stuff because, as a Marine, they assume it p*sses me off.

Always seem baffled by my response, “I served because of my belief in their right to do that.””

“People assume that I am unemployed, poor and therefore uneducated because I always wear the same clothes, drive a small car, and am not very talkative.

When I need clothes I buy the same piece 4-5 times. I don’t feel like bothering about what to wear. My car is exactly as big as necessary. Why should I pay for more?

I have 2 different academic degrees and am a freelancer, working mostly from home.”

“As a kid (around 10-15) people were so convinced I was some rude demon child that hated everybody when in reality I was just depressed and didn’t trust people enough to believe they had my best interest at heart so I just didn’t speak.”

“Becuase I am African American, people assume my tastes generally are rap music but I’m actually am leaning towards punk, towards old rock, bubble gum pop, and then some rap music.

Not all. Kinda just liking RnB if that’s all right with yall.

Oh yeah don’t expect me to be a real anime guy. But yeah that’s a thing. My girlfriend says my demeanor is the main reason why no one sees me as the nerdy black guy anymore.

9. You got the wrong person.

“I was about 21, never drank/smoked. Was highly against it at the time.

My step brother and his friends were about 17. They got caught smoking and all their parents blamed me because they apparently heard rumors I was a druggy.

It was the weirdest thing all the parents evil eyeing me n what not when I was the good one.”

“When I was 18/19 I worked in fast food while getting my degree in Psychology. I always had customers make smart *ss remarks about me when they were angry and it was usually along the lines of saying I’m uneducated, a high school drop out, etc.

One day there was a specific incident that happened where a customer got mad at me about his order being wrong. He started yelling at me and saying I needed to go back to school if I couldn’t get a simple order right.

I was on the verge of tears when out of nowhere one of my high school teachers walked up who was there with his family for lunch. He congratulated me on being accepted into college and heard I was working hard.

The guy yelling at me actually apologized after my teacher walked away and told me he’s just used to dealing with “dumb fast food workers” most of the time.”

“A lot of people assume I work in the trades or have no education because I have a lot of tattoos. I have 4 degrees and work in L&D *(learning and development).

A lot of people assume I am a heavy drinker, because I’m Eastern-European. I have maybe 10-15 alcoholic beverages a year.

I’ve had a few people tell me I’m quiet; I just didn’t like them and avoided talking to them.”

12. Mind your own business.

“A lot of people assume I got married soon after my divorce and gave custody of my daughter to my ex because I was cheating.

Nope. I gave him custody because she asked to live with him and he has the ability to provide for her much better than I could. I could have made the divorce super messy and petty and came out very well off. I didn’t want to put my daughter through that simply for money.

I got married soon after my divorce because an amazing guy came into my life and I decided being happy was more important that what other people assumed.”

“People in high school assumed I was gay based on…I’m not actually even sure.

And it wasn’t even like them being curious, they straight up assigned that s*xuality to me and refused to believe otherwise. The things they would use as “proof” were some of the biggest stretches I’ve ever heard.

One time they took a look at my nails and were like “you paint your nails, you’re clearly gay!” My nails weren’t painted, it just didn’t look like I clawed my way out of a hole with my bare hands. I’m sure some of them still think I’m gay years later.

The reality of the situation is that I just don’t talk about the women I’m interested in openly. It doesn’t seem like that should be anyone’s business except for mine and the woman in question.”

“People in high school spread rumors I was ALWAYS having s*x.

I’ll be the first to say that nothing could’ve been farther from the truth, and many girls couldn’t even stand me. I have no idea where the rumors came from or how they started. Some of them even made their way to the local civic theater and other high schools.

I actually had a couple instances where someone would tell me (fake name used as an example) “Sam Holtman from South High said you were having s*x with blah blah blah” and I had never met the people mentioned, or even knew anyone from the other school. It happened my last two years of high school and it was very surreal.

It followed me to my Sophomore year of college, but it happened significantly less often.”

In the comments, please tell us when people assumed things about YOU that were just plain wrong.