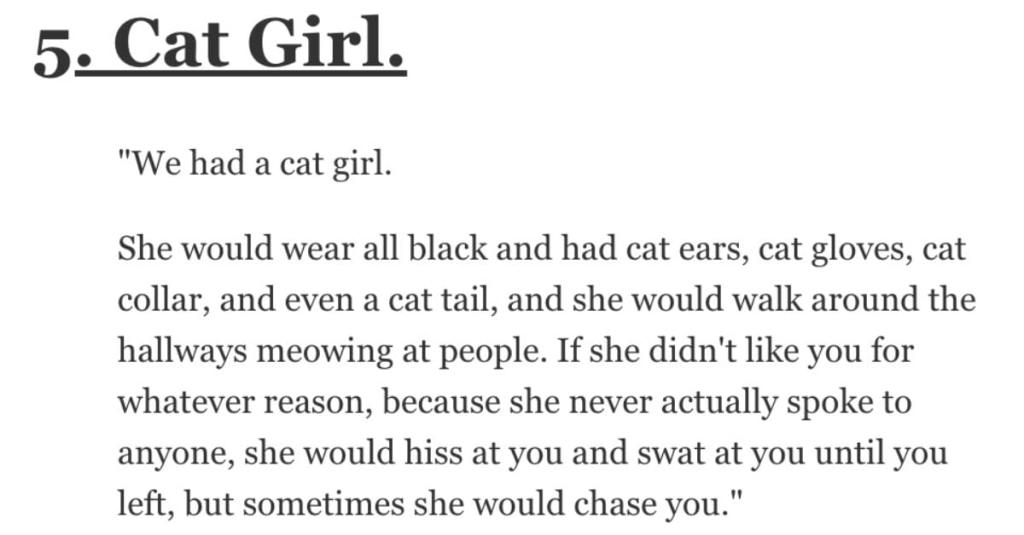 What Did “the Weird Kid” in Your School Do That You’ll Never Forget? Here’s What People Said.

I don’t know if there was something in the water, but I felt like my high school had MULTIPLE weird kids who were always acting out and creating chaos in the classrooms and hallways.

I was never scared by them, but I rather enjoyed their antics and they provided a nice break from the monotony of everyday school life.

“He wrote in my yearbook “When I was 6 years old, I went into a cornfield. I didn’t realize it was a maze. I was stuck for several days without food or water. When they found me, the doctors said I’d never be the same. Good luck in college!”

Made an album of electronica called “Hook anthems” and each one was a soundtrack for different mundane tasks of his life.

He sold only one copy to a maths teacher – and it’s also one of my life regrets that I didn’t buy one too.”

“The albino kid in school. He would take off running down the hallway with one hand straight out in front of him and yell, “white lightning!”

He was weird but everyone liked him.”

4. He was always gifted.

“Poured his juice on the table at lunch and suction cupped his mouth over it and inhaled it all like a hoover when you put it directly onto a hard floor.

She would wear all black and had cat ears, cat gloves, cat collar, and even a cat tail, and she would walk around the hallways meowing at people. If she didn’t like you for whatever reason, because she never actually spoke to
anyone, she would hiss at you and swat at you until you left, but sometimes she would chase you.

She had two friends if I recall correctly, and she would nuzzle into them and purr. She was the ONLY person who acted like this, and she was that way my entire highschool years, albeit a year younger than me. And I’m pretty sure she was in the special ed classes.

I graduated in 2018, and I often wonder where she is now and if she’s still meowing at strangers.”

“This girl decided she wanted to be pregnant.

She proceeded to ask probably half the people in our high school if they would impregnate her, and then when that didn’t work she brought a zip-lock bag and asked for guys to j*zz in it.

Everyone called her Sperm Bank after that, and I honestly can’t remember her real name.”

“After one of my female friends rejected his advances he proceeded to jump off of his roof, twice, and broke both of his arms.

Second thing, he made a wooden weed pipe in wood shop and then tried to smoke out of it in class.

Another weird kid, who I might mention probably had a cognitive disability, so I don’t want to be mean, hid under a bridge in town and drank multiple bottles of Pepto-Bismol, and then went to school acting like he was drunk. He attempted to get people to drink some with him, and then went back to the bridge and tried to light stuff on fire until the police arrived.

Another one, a true looney toon of a guy, shortly after high school was caught with a large amount of guns in his trunk, rifles pistols and all that, and went to prison/jail over a multitude of crimes. Don’t even think he was in a gang, just pure insanity drove him to do insane things.”

“Ended up in a mental institution because his parents bought him a new mattress and while removing the old one they found multiple mason jars full of blood, no exaggeration 2 gallons total.

There was a police investigation and turn out it was all his blood, his only answer as too why was “just in case”.”

“There was this huge guy, tall and wide, in our classes. To support his impressive body, he ate a lot.

He’d go through the wole stack, until all cookies were partially eaten and in a neat stack on the other side of his desk. Thenhe would do it again, take one bite of the top cookie and place that in the original side of the desk, bite the next cookie etcetera.

After maybe 15 minutes of biting and stacking, the whole lot was gone. Now we weren’t even supposed to eat in class, but he always got away with it somehow.”

“Humped my desk for a solid minute while maintaining eye-contact with me, and then said, “thanks” and just walked away.

I’m a guy, this was 15 years ago, on my first day at this new school, and I was just eating lunch at my desk, and this dude just walked up and went to town. No context, no introduction, nothing.

“Robbed a gas station dressed as a ninja, armed with a katana. Stole cash from the register, all the cigarettes he could carry, and a bunch of lottery tickets.

He then fled across state lines with a 17 year old girl (he was 19). Not a great result for him.”

“Was in the band during some down time, some guy kicks off his shoes and socks and bites the ends of his toenails off.

Most of the class “casually” migrated towards the other side of the room.”

“I’m from a small town. There was this weird kid who was a year older, but he was so weird that even the younger kids would pick on him.

I didn’t really know him, but I put him in the weird but harmless category. He graduates, and then decides to rob the local Taco Time with a shot gun. Well, it is a small town.

“So, there was a guy at our school when i was a freshman that everyone called “wolfman” who was weird in all the bad ways.

He claimed to have super powers: teleportation, DBZ like energy creation and what not. All the girls said he would he just stare at them if they had class with him. He hung around us freshmen and did his best to “flirt” with the girls. For an example of his “flirting” he once told a girl that while astral projecting, he saw her face on Jupiter. Needless to say, girls stayed away from him.

He graduated though, and his brother started at the school. Now, “wolfman” wasn’t a tall guy by any strech of the imagination, maybe 5 feet at most, but his brother was a good foot shorter than him. He looked liked he belonged in 3rd grade (he never got any taller). It didn’t help that he always wore a child’s goosebumps jacket, that made people start calling him goosebumps.

He was even more “convinced” of his powers than his brother, but at least he was less s*xually creepy, but that’s all he had going for him. One memorable day i was in math class, and he started shaking violently, people ignored him, so he started flapping his arms around.

Wondering if this was an actual seizure the girl next to him put her hand on him and asked if he’s ok, he growled back “take your hand off me, this power is too much to contain!” She started yelling at him for faking a seizure and he went back to normal death stare foward grumbling about his powers.”

Do you remember the stuff that “the weird kid” did when you were in school?

Tell us your stories in the comments! Thanks!