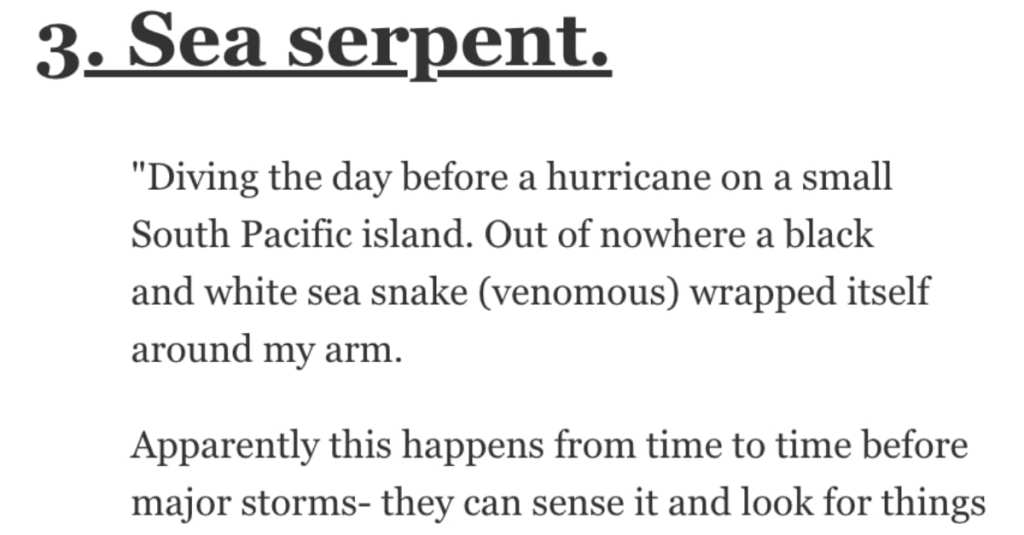 I’ve been snorkeling a few times and I really love the ocean, but I’ve never been DEEP down there, as in scuba diving.

I think it would be a great time, I’ve just never taken the plunge, so to speak.

But I have a feeling that people who spend a lot of time underwater see all kinds of crazy and creepy things…and now we have the proof!

Here’s what people on AskReddit had to say about the scary things they’ve seen while diving…let’s take a look.

“I wear contacts so getting water in my mask is extra bad as I cant open my eyes under water.

Shortly after being told about a shark colliding with my friend from behind and removing his mask I am pretty scared about this (not sharks in general.) And I see a shark heading for me. They are curious, they often shoulder bump you as they turn at the last second. But she wasnt changing course.

I stayed calm and still as long as I could and at the last second before she hit my mask I ducked. Except instead of ducking under I just headbutted her right in the nose. Everyone saw and thinks it was the funniest thing ever.

I may be the only person alive who headbutted an 11foot shark in the nose but it was because I was scared she would take my goggles off.”

“Free dove to about 160 ft in Deans Blue hole in the Bahamas. It’s where a lot of the free diving world records are set – super neat place, google a picture.

Anyway I’d never really been past 100ft freediving, but this was the perfect place to do it. No current, there’s ropes to keep you straight and allow a slight pull back up.

Scary part is that you become pretty strongly negatively buoyant after like 60ft, so you’re basically hauling *ss down while doing nothing and using very little air. So I’m dazed out a bit feeling good and counting the lines that mark depth and all of a sudden feel pressure like my trachea is going to collapse and wake up and realize I’ve counted to the line that’s around 160 ft or so.

Very scary moment because I wasn’t sure if my body could take the depth or if I had gone too far and wouldn’t have enough air to get back up, which is a much slower and more air intensive process.”

“Diving the day before a hurricane on a smal South Pacific island. Out of  nowhere a black and white sea snake (venomous) wrapped itself around my arm.

Apparently this happens from time to time before major storms- they can sense it and look for things that are heading towards the shore so that they don’t have to put in so much effort to get out of the sea.

As soon as I was in the shallows it uncurled and headed up the beach where it hid under a breadfruit tree. I thought I was going to get bitten to death by a snake at sea… Turns out I was just a taxi for a very calm but rather rushed reptile.”

“The only scare I’ve had is some jack*ss in a yacht cruising through our dive location at full throttle. You could hear the boat coming for a solid minute or two before it flew over our heads.

“I was diving under an oil rig between Long Beach and Catalina Island.

I was collecting sea scallops at around 60ft or so and knowing that there were seals all around I always kept an eye out for sharks, you just can’t help but think about them. So I was just about to finish my dive but I was looking for one more scallop for dinner and I saw a blur swoosh right by me just in front of my face.

My initial immediate reaction was SHARK!, but it was just a d*mn seal playing with me. I literally was screaming under water for a couple of seconds.

Funny thing is I have over 25 logged open water dives, some at night, mostly around Catalina and I never saw a shark.”

“Was doing a boat dive and came up to find 20 foot swells.

We just had to chill for a while down under until the boat would calm down and we could actually grab the ladder without getting smashed. I remember seeing the ladder going up and down 6-8 feet at a time.

I finally grabbed the rope and climbed up as fast as I could. I hung on to the ladder and the boat crew grabbed my BCD and hauled me out of the water and onto the swim step.

Half the divers puked on the way back into port. That was the roughest conditions that I have ever been diving in.”

“I did a shipwreck night dive on New Years Eve one year, and it was spooky as hell. 80 ft down, really small plane. Visibility was obviously not great (I’ve only done this one night dive), so these slow moving fish would come looming out of the dark…

Scarier to me was getting back on the boat, because it got really stormy. You’d be looking UP at the ladder, and it’d come crashing down right next to you. The waves were crazy. My brother got hit by the ladder, but not too badly, and we all managed to get back ok.”

“I was diving in the early 90’s off the coast of Florida. I had been using a spearfish ineffectually for a few minutes when I heard a strange grinding noise to my right.

I turned my head to see an enormous set of barracuda jaws grinding just inches from my face. I still recall the fish’s eye rotating around to check me out as if considering it should take a bite or not.”

“I dove the Great Blue Hole of Belize when I was 16. I was 150 feet underwater, and about a total of a dozen bull/reef sharks were swimming above and below me in circles.

Regardless of all of the sharks, 11/10 coolest experience I’ve ever had.”

“Night dive on the Great Barrier Reef with my partner who was learning to dive, myself (about 10 years of diving) and a divemaster. First night dive for my partner, who had been hearing from the 2 of us about how incredible it is.

Night diving is one of those amazing, life changing experiences- completely different to day time diving as the sights and sounds of the reef are radically different, plus viewing the reef through just the small areas of light from your torches changes how you process the experience. Its exhilarating and incredibly zen at the same time.

As we’re circling back to the boat, the sharks who have been standoffish but curious (as they usually are), come in and one has an inquizzative bite of the divemasters fins. Never seen or heard of sharks getting this aggressive with divers, so the 3 of us d*mn near catapulted ourselves out of the water and cut the dive short.

Have never been worried about sharks while diving until that moment. Normally, they’re more afraid of you than you are of them. But not this time!”

“I grew up in Australia. When I was 15, I took the family boat out and dove the reef myself to clear my head (mistake number 1). I was down at a depth of about 28 metres(90 feet)when I was only rated for 60 feet (mistake number 2).

Whilst diving, I spotted a 3.5m Mako shark coming right at me. For those who are unaware, Makos are basically the cheetahs of the ocean, and they only have 2 speeds: Curious (harmless) and Lunch (very much harmful). This guy was in lunch mode.

So I hovered, as I had been trained to do, as there would be no way for me to outmaneouvre it or escape it. Nowadays, we dive with Shark Shields, which emit electronic pulses that freak the sharks out and keep them away, but back then, what we used was essentially a chainmail sleeve.

The idea being that sharks hate the taste of metal, so if you give it your arm, it’ll bite down, decide you’re gross, and move along. So I wait, and it comes, and I do a perfect move to give the beastie my arm. Just before the cronch, however, it occurred to me that I had left my sleeve on my bed (mistake number 3).

I had my kelp knife drawn, and stabbed it right as it bit me. It swam off, and I was alive, however, now I had a series of problems:

I had HUGE open gashing wounds on my arm from the bite in open water, and was trailing blood everywhere

Once the shock wore off, you realise that you’re in SALT water and salt and open wounds don’t feel good

In a panic, I dropped my weight belt and shot up to the surface without any sort of waiting period (hello bends – mistake number 4)

Because I hadn’t been paying attention to the currents, I was approximately a quarter mile downstream of my boat, which means I had to swim up to it (mistake number 5)

When I got to the boat, I really started to wish I had done as my da had said and had the comms fixed (mistake 6) or that I had upgraded the first aid kit like I had been threatening to do (mistake 7).

So I end up racing back to shore with nothing more than a toruniquet to staunch the bleeding. Long story short, my series of unfortunate self-inflicted events earned me 172 stitches, boatloads of physical therapy because the shark had actually bitten down on my tricep and detached it, and easily identifiable scars on one of my arms for the rest of my life.

Oh, and I lost my deceased grandfather’s favourite kelp knife that he had left me.”

“I got the bends once.

I was careful. Followed my charts and my computer. Had appropriate depths and surface time. But I didn’t drink enough water so I was all out of wack.

Felt fine until I got home, mild headache. Then I woke up and it was just pain in my left arm. Elbows. fingers. Couldn’t even bend them without bad pain. My headache was intense and I was so dizzy. Called my older more experienced dive buddy and I got rushed to the hospital.

Docs got me hooked up and fluids, checked my dive logs while the decompression chamber was set up. And then got me in there with a nurse. 8 hours in a tube about the length of a car but as wide as maybe a double bed?

I was on oxygen and hooked up to an IV and it was so loud, with all the air rushing in. As soon as I got to “depth” the pain vanished. It was crazy.

I’m fine now obviously. But I wasn’t allowed to dive for a month which sucked but hey. The dives were pretty great.”

Okay, now we want to hear from you!

Tell us about your own scary deep sea experiences in the comments.