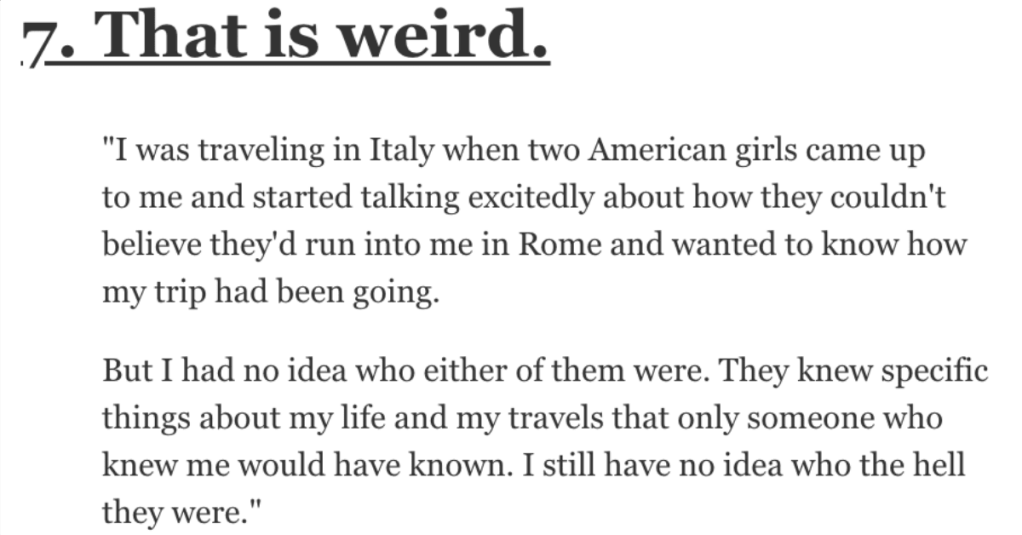 Life sure can be tricky, huh?

You think you have everything figured out and then BAM!, you get hit with something totally weird that you really can’t explain…

Has something like this ever happened to you before? It could be a big mystery or just a little one, but either way, they can gnaw at you and make you pretty uncomfortable.

Here’s what people on AskReddit had to say about this…

Asked everyone I know, no one claimed they did. I don’t think I’ll ever find out who it was.”

“Dropped a screwdriver in my bedroom, heard it hit the floor, then it just disappeared. I never saw it again. I wasn’t even standing, I was kneeling, so it only fell a few inches.

It wasn’t a huge screwdriver, but there aren’t any gaps in my bedroom anywhere that I could find that a screwdriver half the size would fit into.”

“When i was a kid, like 7 or 8, i started to randomly see nothing but brown. Like staring at a wall.

Usually only on one eye, but not always the same, rarely on both at the same time.

Went to several doctors and they did some testing, but nothing came up.

As I grew older, there was more time between occurences, and now I haven’t had it in close to 10 years.

Sometimes it still bothers me not knowing wtf that was.”

“My childhood home in Utah was right behind a farm with regular farm things; horses, chickens, goats, etc.

One day a peacock shows up out of nowhere and makes the farm and our backyard his own home. He cries and cries for weeks. Later, a peahen shows up. They have babies, the babies have babies, loads of peafowl all over.

They became part of my everyday life. My chores were to feed the peafowl our cat food, and scrape their poop off the deck everyday. This goes on for 8ish years.

Then, just as suddenly as Peter (the peacock) and Petra (the peahen) appeared, they all disappeared.

No one in the neighborhood had any idea where they came from or where they went.”

“Car followed me home from work late at night, didn’t know where the police station was, so I stopped on a dark road near my suburb to make sure he was actually following me, and sure enough he stops behind me.

I got out and grabbed the emergency axe out of the truck without even shutting off the car and started walking towards it, and the car sped off.

I was tired and stupid for doing that, but I will never know why or who that was.”

Spend a little time with her, nice but nothing special between us.

She leaves, a couple days later time to go for me.

I take the train to Denver, end up getting stuck, delayed a day or two.

Miss my transfer and end up in Chicago.

Get off the the train, and there is Wendy, in the Windy City, walking right by at that instant.

There were a lot of serendipitous moments during that trip, so I’m perplexed but not surprised.”

“I was traveling in Italy when two American girls came up to me and started talking excitedly about how they couldn’t believe they’d run into me in Rome and wanted to know how my trip had been going.

But I had no idea who either of them were. They knew specific things about my life and my travels that only someone who knew me would have known.

I still have no idea who the hell they were.”

“One night I heard my boyfriend come home from work while I was sleeping, he came in and said hi then went out to the living room. I get up not long after to convince him to come to bed, and he’s not home….

Creeped me out for a while.”

“Someone once came to my parents door at 3 am, claiming they ran away from home because they were being abused by their father and we were the only people to answer.

My parents check that person into a shelter and funded them for weeks. Eventually they left the shelter and returned home. Then came out and said that my parents made the whole thing up and that their family is perfect. THEN sent a huge mailer out to hundreds of people saying my dad is a r*pist (he’s a local figure so it was a big deal).

To this day I have no idea if that family is psychotic or somehow manipulated their child. Blows my mind.”

“I was on youtube browsing through videos and came across a random video from my old job.

I thought it was crazy how I found the video randomly, then I saw myself on the video walking with someone. I smiled at the person filming and started talking to them as if I’ve known them for a while. I have no memory of this ever happening, and I don’t recognize the person that filmed it at all.

They had a few random videos of themselves singing and a few photos, but I don’t remember seeing this person ever in my life. Yet they have a video of me walking up to them and starting a conversation.. which is kind of weird considering I’ve always been kind of quiet and shy.

Plus how the heck did this video pop up on my suggested videos after watching bloopers from The Office?”

“When I was little, me and my babysitter were outside and it started to rain.

She lifted her arms to form a T shape, and it started to rain heavier.

She put them down and the rain slowed down.

She put them back up and it poured again.

Im sure there’s a valid explanation, but for now Im still baffled.”

“The time I woke up on top of my refrigerator.

I don’t remember exactly how old I was, sometime in my early teens, but it’s exactly what I said; I woke up on top of my refrigerator. I had been sleeping up there curled up like a cat, and to this day I have no idea how I got up there. There was nobody home at the time who would/could have put me up there while I was sleeping, and there’s no way I could’ve climbed up there unassisted.

But there were no chairs or stools or anything around the fridge I could’ve used to climb up, and I obviously couldn’t have used one and put it back while I was still up there. I also had no prior history of sleepwalking whatsoever, and to my knowledge I’ve never sleepwalked again since.

To this day, I have absolutely no idea what happened, and it still bugs me.”

“I’ve got three children with pretty unique names. Not unheard of but not common.

My oldest son, Rylan, was 9 at the time and sitting on the couch. My cell phone rang, which was weird because it was only used for emergencies as I used my house phone more often being a stay at home mom. I answered it even though I didn’t recognize the number.

Here is how the convo goes. Me: Hello? Teen Boy: Hey mom! M: Um who is this? (Looking in the living room to see all three of my kids hanging out on the couch) TB: Mom! It’s me, Rylan!!

Me: RYLAN WHO! (Now I’m frantically looking at my son who is very confused) TB: Mom, stop playin! (Phone sounds like it’s got a hand covering the mouth piece and I can her another voice say “no it’s not time yet”) Oh I’m sorry, wrong number….click

Whether it was a prank or my kid from the future I’ll never know. I do know I had to hold onto the wall so I didn’t pass out. After I tried to call back about 2 mins later it said the number was disconnected.

What do you think is your life’s big unsolved mystery?

Please share your stories with us in the comments! Thanks!