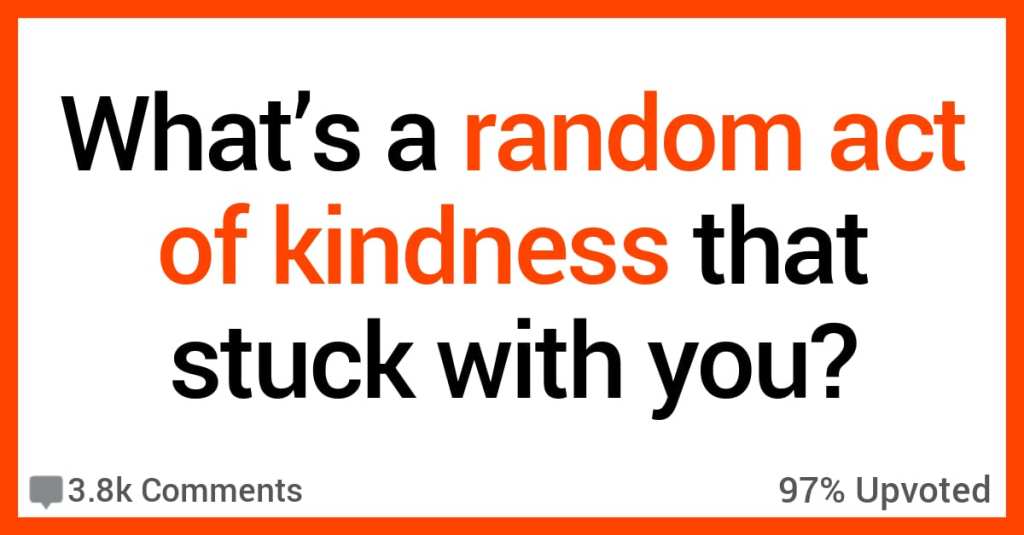 I remember one time I was out in the Westport district of Kansas City late on a Friday night with a bunch of friends bar hopping.

I broke away from the group for a few minutes because I was hungry and walked over to a hot dog stand on the street and waited in line behind a couple of other folks.

As I was waiting, a homeless man who looked to be in pretty bad shape asked me for some change. I said, “how about I buy you a hot dog and a Coke?” He gratefully accepted and thanked me profusely.

As I walked away, a total stranger said to me, “that was a really nice thing you just did.”

I guess I didn’t think about it too much, but spending a few extra bucks on a person who was down on their luck maybe (hopefully?) gave them a little bit of hope that there is still some kindness out there in the world.

And I’ve definitely had people help me out in situations where they didn’t probably didn’t realize that it meant a lot to me.

Folks on AskReddit shared the acts of kindness that have stuck with them over the years. Let’s take a look.

“I was having a bad day and after getting off my retail job where I didn’t get to eat.

I went into Rubio’s (restaurant in San Diego) and had forgotten my wallet.

They gave me the food anyways. Not sure why, but that stuck with me.”

“Freshman year in high school I wasn’t a very popular, outgoing kid. Then one day a friend invited me to hang out with him and his cousin.

The cousin went to another high school. My friend wasn’t very popular either at our school, but his cousin was a really popular kid at his school. We all went out to eat and when walking into the restaurant, my friend’s popular cousin held the door open for me. And I was kinda shocked.

I had been trying to be more “hard” so this small act of kindness really stood out to me. I found his kindness super endearing and this helped me realized that confidence in kindness and thoughtfulness was more of my thing. We went on to be amazing friends to this day.”

“My first year in China.

For those who don’t know, China isn’t exactly kind to foreigners. But I was at this hot pot, after work, getting food to eat.

This Chinese guy came and started talking with me, had to use my translator of course.

But when he left he paid for my bill. That was an awesome guy.”

. The Palliative care team organized the people to do it for us. We had to pay for the hardware ($60) and the Pal Care team would pay for the labour.

The guy came and put the rails in and I got my card to pay for them and the guy said to us “it seems like you guys have had a rough go lately, this one is on the house.”

He wouldn’t accept any money from us at all.”

It was evening and raining in St Louis when a guy stopped to give us a ride. Offered a stay at his house for the night and we said sure (which sounds crazy now). He took us to his home, introduced us to his wife and 2 kids, set extra places at the dinner table, gave us the guest room, made us breakfast next day and drove us back to the highway.

These folks were awesome and the epitome of good karma.”

“Had a circulatory collapse and was about to die of exposure in the woods. A man found me and my wildly barking dog.

He called an ambulance that came into the woods and he called his wife who did bring my dog home. I spent the night in the ICU and was OK. I bought his wife flowers and talked to him that I didn’t know what to give someone that saved my life.

He didn’t want anything and said that it was a really intense experience for him and that he is glad that I made it. Since that day my dog is allowed in my bed.”

“A cop took me to rehab.

I was definitely going to jail, so I moved my court date up, stood in front the judge, told him I have a problem and asked if he would accept rehabilitation as an alternative to jail, I explained to me this is my rock bottom since I was looking at jail… He said yes, that sounds fine, how will you get there?

Walked into the mission with fishing line stitched chucks, and a bag full of clothes, left a year later with a job. Haven’t looked back since.”

“When I was a kid we didn’t have a lot of money, so we often shopped at thrift stores.

What I loved about that was that you could get 10 books for a dollar, so I would plant myself in front of the book section and make piles of which one I wanted to get and then decided after I’d gone through them all.

One day an older lady saw me sitting with my piles and asked if I liked to read. I told her I did and showed her a few of the books I found that I liked. She smiled and then pulled a dollar out of her purse, handed it to me and said, “Promise me that you’ll keep reading.”

I was so happy and immediately stood up and said that I would. She smiled and walked away and I went back to my piles able to pick out an extra 10 books to take home.

It was just a small act of kindness for her, but for me having a random stranger encourage my love of reading and making me promise to never stop definitely had a lot to do with my continued love of reading. This was probably 22-23 years ago, but I still think of her whenever I buy a new book.”

“I remember going to a Starbucks drive through and finding some kind soul had given two hundred fifty dollars to pay for the customers who were after him.

There wasn’t really anything special about the occasion, but it’s left a deep impression with me ever since. When I have extra pocket money and can remember, I always pay it forward as well.”

“A lady bought me groceries once.

I was completely financially hosed, too. My daughter had just been born maybe 3 weeks before, and the bills were just starting to show up. So of course I get laid off. Right before Christmas, so I already spent most of my cash on presents.

A few months before that I took out a HELOC on my house, used that for a down payment on my new house – so I went from having zero mortgage payments to 2. I was in a BAD way. Terrified I was going to let my family down.

So there I am in the grocery store trying to buy formula and other stuff to keep us fed with WIC coupons. And this lady ahead of me in the line is having NONE of it. She pays for everything the coupons didn’t cover. I told her I was okay (I wasn’t, she must have sensed it), and she insisted.

I’ve never forgotten it. Now that I’m doing better I always keep an eye out for opportunities to do the same.”

“I was working multiple jobs to put myself through college.

I was incredibly stressed, running from one job to the other, in my brand new work clothes, and it started pouring down rain. Some of the worst rain of my life, totally unexpectedly (clear that morning). I just lost it as I tried my best to save my work attire. Tears streaming down my face.

Well, As I was crossing the street, someone just handed me their incredibly nice huge umbrella and kept on walking! I was shocked and called after that I couldn’t take it from them (they had no other) and they just said, “You look like you need it! Please keep it!”

It was the nicest thing a stranger had ever done for me. I managed to show up to work looking much more presentable and just full of such gratitude and hope. It completely turned my week around.

I gave away that umbrella to someone else later and I still think of that kind stranger all the time. Paying it forward matters.”

In the comments, please share your stories about random acts of kindness that have stuck with you.

We can’t wait to hear from you. Thanks!