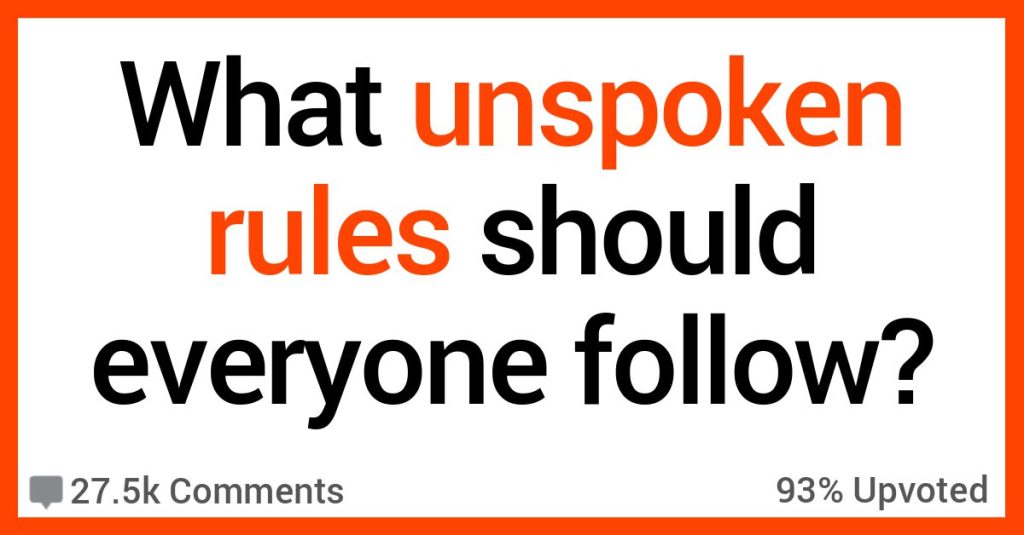 People Discuss Unspoken Rules About Life They Think Everyone Should Know

It really blows my mind when I see people NOT do certain things in public.

Like holding doors for other people or not tailgating cars.

It drives me nuts!

And there are a lot of unspoken rules in life that people seem to ignore…or maybe they just don’t know about them.

Let’s see what unspoken rules AskReddit users get fired up about when people don’t follow them.

“When your motorcycle is 160 decibels maybe don’t drive around the same block 35 times per day.”

If you’re waiting for something, move off it to the side.

We’re not obligated to walk around you because you have an ego.”

“Let people know when you have them on speakerphone!

Especially when your husband/wife/partner/friend/any other human is within earshot.”

“If someone says they’re not drinking tonight, don’t make them feel bad or imply they are being boring.”

“People playing music loudly on their phones in public or on public transport, especially.

No one wants to hear what you’re listening to.”

“Don’t immediately assume it’s okay to s**ke in someone’s house, regardless of their living situation.

I don’t care if it’s literally a cardboard box or an upscale mansion. Ask first.”

“When someone is helping you move, you offer them pizza and beer, no exceptions.

If they don’t drink, offer them soda or water.”

“If someone is hosting you, don’t insult or give a negative critique of their home.

Some people have fewer resources than others, only one income to live off of, and have worked very hard to get less, etc.

No need to point out home imperfections.”

“Move your cart to the side of the aisle when looking for groceries, don’t hog up the middle.

“Oh, of course I’ll wait for you to pick out a flavor of beans, take your time!””

“Waiting for others to exit an elevator or train before entering.

Saying thank you when someone holds a door open.

“Hey why is this character doing this thing?”

“So now what’s this character doing that for?”

“Hey why is he doing that now?”

“JUST WATCH THE MOTHERF**KER AND THESE QUESTIONS WON’T BE F**KING NECESSARY I PROMISE YOU!””

“Respect people’s right to say no.

It’s okay to ask someone for something, or to do something, or whatever – but if they say no, don’t pester them or guilt trip them.

People who pressure their friends are kind of garbage friends.”

What do you want to add to this?