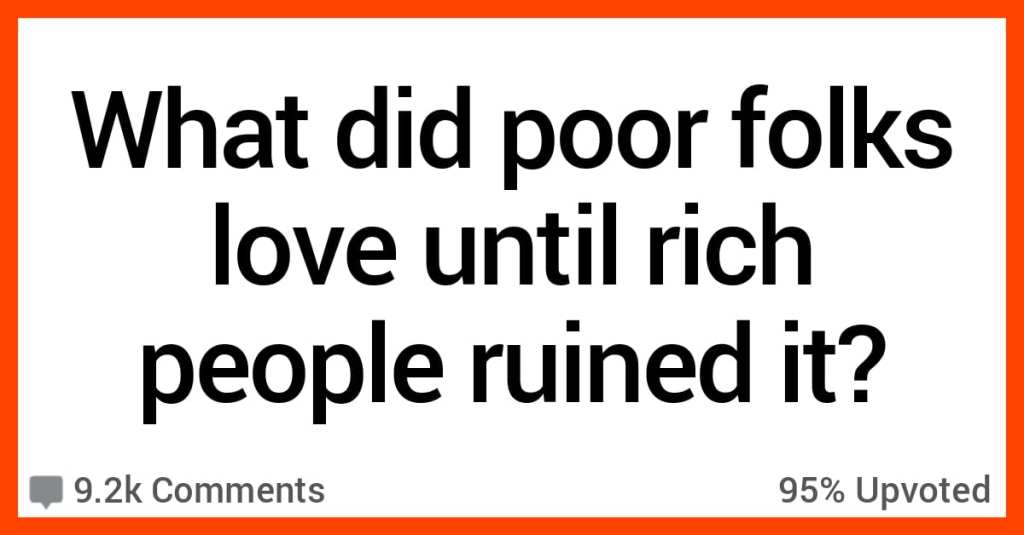 I think it’s pretty hard to generalize about a whole group of people doing this or that, but I also believe that a lot of folks out there have VERY strong feelings about people with a lot of money.

Especially when it comes to how it affects them…

AskReddit users discussed what poor folks loved until rich people came along and ruined it.

“I grew up camping with my family (middle class with an old tin can camper, best memories of my childhood).

Now I work in a campground seasonally (4 years now) and I can’t even tell you what’s happened to camping: expensive, gawdy toy haulers everywhere, I have seen a large flat screen tv sitting on a picnic table (turned on), using campground water to fill a hot tub, satellite dishes, people cutting tree branches so it didn’t scratch their 6-figure RV as it tried to squeeze into a small campsite.

2. Used to be undesirable.

Used to be for everyone, and often viewed as dirty or undesirable by the upper class.

“Chicken wings. Used to be the cheapest part of the bird.

People can’t afford to live here anymore but most of the homes are empty 6 month out of the year.”

They were designed to improve education of children who otherwise couldn’t afford a good one and now they are these exclusive private schools that only the middle class and above can afford.

The toys and resources that were designed with the program as things that were affordable and of enough quality and usability to be worth it for poorer families are now sold at prices that only those who are well off would consider purchasing them.”

“Football was a working man’s game.

My Dad took me and my cousin to games every week home and away.

This is beyond many now.”

Now everything is snatched up by a handful of resellers and pumped up in price on ebay or at conventions. Thank goodness for emulation.”

“Cheap foods – donuts, cupcakes, hamburgers, wings – that have all been given the “foodie” treatment and went from good cheap eats to gourmet pricing without a corresponding increase in quality.”

Used to be dirt cheap, now it’s a significant cost if you want to feed a group of people.”

Then rich people had to make them weird, make them with clear plastic cut-outs. Make them look how an alien would guess what ripped jeans are supposed to look like if you translated it into their language poorly and then had to describe them.

“We moved out to this rural town so we could get away from the stuffy city.”

“Now we will bring in centralized water because we don’t like having a well, try and make an HOA so we can stop those poor people who lived here before us from having gardens and old cars outside, campaign to remove the zoning restriction that stops the field behind the poor locals’ houses from being stuck up against a farm (and let the senator were related to buy it, not that it’s related).

Call in noise complaints at 4:00 PM because the poor local kid is riding a dirt bike, hook in to the sewage system for the city miles away because the new farm is wrecking our systems’ drainage, ban everyone from going out on this large pond that the community was built around because it’s considered our private property.

Destroy the ecosystem of the pond by dumping cement in the bottom of it and get away with it because my brother in law is the guy who gets called about it, institute a neighborhood watch the harasses local kids playing Pokemon Go and calls the cops on them because they are clearly looking to steal from us, and………”

I have no grudge. Promise.”

“Storage shed auctions used to be really cheap until that stupid Storage Wars show came along.

Now instead of buying cheap for some furniture, too many people are jacking up the prices thinking that there’s some lost antiques worth thousands that they’d find in every unit.”

Do you think there are things out there that rich folks have ruined for poor people?