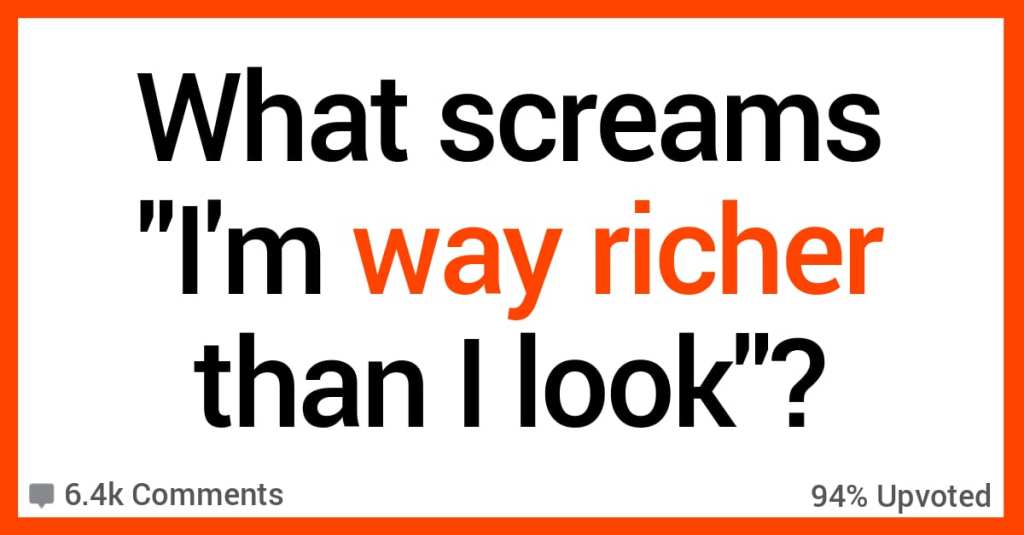 People Discuss What Screams “I’m Way Richer Than I Look”

If there’s one thing I’ve learned so far in life, it’s that you really can’t tell who has a lot of money and who doesn’t mot of the time.

Some people with barely any money at all buy expensive cars, fancy clothes and jewelry, and live way beyond their means.

Meanwhile, some folks with A TON of cash look like they live on Skid Row and don’t have a penny to their name.

Life sure is weird…

What screams “I’m way richer than I look?”

Let’s see what folks on AskReddit had to say.

1. Not the fanciest car.

“Old boss to a company I worked for.

He drove an old Toyota Hilux and worked in the factory of the building. I remember  I spotted him put $300,000 on a roulette table.

Doubled it and put it in his pocket.

He would always ask me impossible questions at work and once I got it right. He bought me lunch.”

“If they are over 60 but have perfect teeth.

This applies more in countries other than the US because everyone seems to have perfect teeth there.

3. Check out the clothes.

“When people think of expensive clothing, they often think of “fancy” brands like Gucci, but really rich people usually consider these brands to be tacky for the most part.

There are entire luxury brands of suits/dresses/clothing/watches/etc… That are used to display wealth among upper class people that would be kind of innocuous to the average person.

Most anyone could recognize a Rolex, but to a person who isn’t “in” on upper class mores, a Patek philippe might slip under their nose.”

4. Not worried about status.

“Status symbols are for the lower classes and the climbers.

The wealthy just live in whatever is comfortable to them.”

“I have a friend from the top 1-2% in his respective country but you’d never be able to tell – except he’d always pay for our food when we went out with him and would sometimes be confused about the price of certain things or why we couldn’t just do certain things (because they’d require big amounts of money).

Another certainly wealthy foreign friend invited my entire family to stay in his family’s second house. He never talks about money but it somehow slipped that he’s got a golden credit card although I don’t know the implications behind having such.

Or a wealthy family I used to live with. We went to McDonald’s drive-through in our pyjamas several times.

“Being able to afford things that last so you don’t need to buy new stuff constantly.”

7. Never thought of that.

“Wearing sunglasses on the shirt instead of on top of the head. I had a job where I came in contact with quite a few very wealthy people. They all did this.

I deduced that it’s because rich people have solid, heavy sunglasses. Probably expensive hair too.”

My mom used to work for a guy that was a VP of an international corporation, basically handling all their finances and legal issues. He owned several malls too and invested in large amounts of property. He was in his 70’s.

At a Christmas party one year, somebody asked him why he hadn’t retired. With a smile, he responded with “it’s not about the money…”.”

“Not knowing the price of cheap food at all, such as instant ramen or cheapest sandwich.

My groupmate’s father is CEO of huge car international corporation, so when we went to store along she was so surprised, seeing the price of cheapest instant ramen and also she said that doesn’t know how they actually taste with kind of confused/innocent face, without any being cocky.”

“A weird zen you can only achieve when you have no financial pressures and you can focus on yourself and those around you.”

“Not trying to show your money by wearing it or constantly spending. My parents are very wealthy.

My Dad wears the same clothes he had in the 70’s or free t shirt he’s gotten along the way. Mom gets a lot of her clothes at Costco. They only have 1 car and it’s a 2011 Lexus because it works well and they don’t see the need to buy a new one.

They live in a 3 million dollar house because it’s in the safest neighborhood and has all the things they wanted for their grand kids to come be able to play.

Really wealthy people just do themselves and don’t care what others think.”

“I’ve had money in my life and learned that the easiest way to live is without stress.

That’s why I love shopping at Walmart or target for clothes because its stress free not worrying about ruining them. I own a company and always wear jeans and tshirts, my mantra being if you don’t hire me because of my clothes then I don’t want to work with you anyways.

I own a Hyundai because it has a 100,000 mile warranty and I pay for the tire warranty and have received a whopping 9 (!) Free tires in just under 3 years. I live in an apartment because I hate shoveling snow and raking leaves and paying for repairs.

Very unassuming life and that’s the way I like it.”

“Look at the watch and shoes. That’s always the tell.

Some rich people dress like sh*t. But they always get good watches.”

“Brand new car, top of the range, all the optional extras

But it’s a Toyota Corolla.”

“A lot of small in the know things.

Like a certain wristwatch that costs a fortune but for most people is indistinguishable (from afar) from say a 2000€ watch. Or a really expensive pen. There’s a lot of famous really expensive looking clothes and accessories like Dolce and Gabana or mont blanc.

Stuff that’s noticeable and recognizable. But then there’s a whole bunch of way more discreet fashion and design brands that can cost a tenfold more and are at first glance indistinguishable from the normal high price range.

They usually have a discreet logo or a distinct feature by which you can tell them apart. While they certainly have a good quality lots of times, their price/performance ratio is basically non existent, so I think they exist only for the precise purpose of saying I’m way richer than I look.”

What do you think is a big indicator of “I’m way richer than I look?”

Do us a favor and tell us about it in the comments.