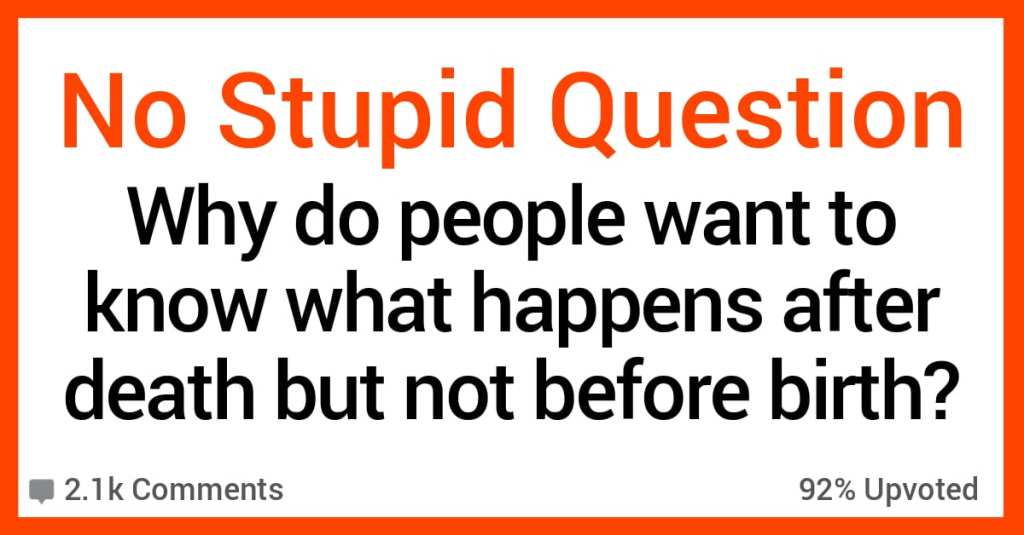 We, as a collective race of humans, spend a lot of time talking and thinking and worrying about what happens to us after we die. Is it nothing? Is it a Christian heaven? It is reincarnation? Argh! We need answers – but not enough to die to get them.

We don’t spend as much time thinking about where we are before we’re born, and if a person believes in the soul enough to believe it exists outside a mortal frame, then it must have been somewhere before it entered our bodies to begin with, right?

Why do people always ask where we go after death but no one ever asks where we were before we were born and had a conciousness? from NoStupidQuestions

These 16 people get to musing, and I gotta say, I was pretty curious to hear their answers.

because death is more of a concern than the other

I had this revelation too and it totally killed my death anxiety. It used to worry me sick, but imagining the time before you were born is not as scary as imagining what happens when you die. I came from it, so I know I’ll be safe when I return.

Also, what happens after we die is something in our future; something that is GOING to happen to us. People dont like uncertainty about the future. We fear the unknown and what we cant control.

Whereas what happened before we were born is in the past. People dont worry about it because its already done.

When sleeping, it’s like we’re dead — we don’t notice the passage of time, we only notice when we arrive at the “end,” which is waking up.

But, we’ll never wake up from death, there is no “end.” We’ll be dead for infinity. And even if we don’t experience the passage of any time, we’ll still be stuck in that state for infinity.

I just can’t help but imagine that I’ll wake up alone on an endless plane of black darkness all around me, can’t move, can’t speak, can’t think, but always aware of the lack of awareness and being. Trapped, for eternity.

You know, I have a toddler and for her she has always existed. She keeps asking me where she was, when we tell her stories about events before her conception, and “you weren’t there yet” just doesn’t cut it. “If I wasnt THERE or HERE, then where was I?” We resolved to the biological “part of you was in Daddy’s body and part of you was in mine”. But honestly, I dunno, baby darling, I dunno…

Try to think of it like trying to figure out the size of the universe. how far does the universe go? It’s bigger than our ability to comprehend it. We can’t physically think in those terms so why bother? Just accept that it’s something bigger than your brain and don’t worry about it.

The thought of being conscious forever scares me more than nothing. Can you imagine how boring that would get for forever? Physics is a thing. The universe has rules. We may not know them all, but if we’re around forever there’s time to figure them out and then what? Same shit different day? I’d rather be nothing.

9. There is theology for everything.

Not an answer per se, but in (some) Jewish tradition pre-born souls, having grown on the Tree of Life, wait in the Guf for their time to be born.

And, of course, people who believe in reincarnation don’t really have a before or after, they have betweens.

Imagine if someone told you that at age 1 they burned your arm with a hot poker. You might be upset, but ultimately this needn’t concern you anymore, it’s in the past.

Now what if they told you they are about to burn you with a hot poker tomorrow. I’d be very concerned, that sounds painful. Current me has to worry about future me’s problems and gets to ignore past me’s, as long as they can be left in the past.

This is from The Good Place, what you said reminded me of it:

Eleanor: I don’t know if what I’m going to say will hurt or help, but screw it. Do you know what’s really happening right now? You’re learning what it is like to be human. All humans are aware of death. So… we’re all a little bit sad. [Shrugs shoulders] All the time! That’s just the deal.

Eleanor: Well, yeah, it is, but we don’t get offered any other ones. And if you try to ignore your sadness, it just ends up leaking out of you anyway. I’ve been there – everybody’s been there. So don’t fight it. And in the words of very wise Bed, Bath and Beyond employee I once knew, “Go ahead and cry all you want, but you’re going to have to pay for that toilet plunger.”

6. It could be the same place.

Alan Watts had a lot to say about this. He reckoned it was the same place. And knowing that frees you from the fear of death that humans cling to so much.

Is there actually a point to believing we existed before our birth if we can’t remember any of it?

Surely that’s like saying “there is an afterlife but you won’t have any memory or attachment to your previous life”, at which point you’re a completely different person and for all purposes, “you” are dead and gone forever?

It’s funny, I sort of feel the exact opposite. I hate the idea of eternal life in a way. The idea of never being able to vanish, never able to just let it all go (in an existential sense).

What horrifies me is the idea of reincarnation. My final moment of death resolving, only to immediately be pulled into some new reality somewhere. No peace, no rest. I suppose you wouldn’t be aware of any ‘past’ existence you had experienced, but the idea still seems unpleasant to me – being trapped in reality for eternity. But if you get to die, you can return to the ‘slumber’ of non-awareness.

I’ll also had that The Church of Jesus Christ of Latter Day Saints (LDS, or Mormons as most people know us) do believe in a pre-earth life where our spiritual bodies existed together with God and that one of the main points of leaving that was to gain physical bodies, then to return to God’s presence and continue to become more like him.

This is a question attempting to logically extrapolate a human concern that was built on emotion.

The emotion is fear and the driver is death. Death, of course, is a natural fear to any living being. Evolution clearly believes that this is a worthy trait for genetic propagation.

There is no fear driving the question of what happens before we are alive, so humans see it as a question of far less importance. Furthermore, with less emotional stakes involved, there is less drive to distort the answer.

Of course, the answer to the former is:

“The delicate balance of systems necessary to generate your specific consciousness have yet to be created, and so you don’t exist.”

And the answer to the later is:

“The delicate balance of systems necessary to generate your specific consciousness have broken down to the point where ‘you’ are unable to be restored, and so you no longer exist.”

1. We are selfish creatures.

My brain juices are flowing, y’all!

What do you think about this? Let’s keep talking in the comments!