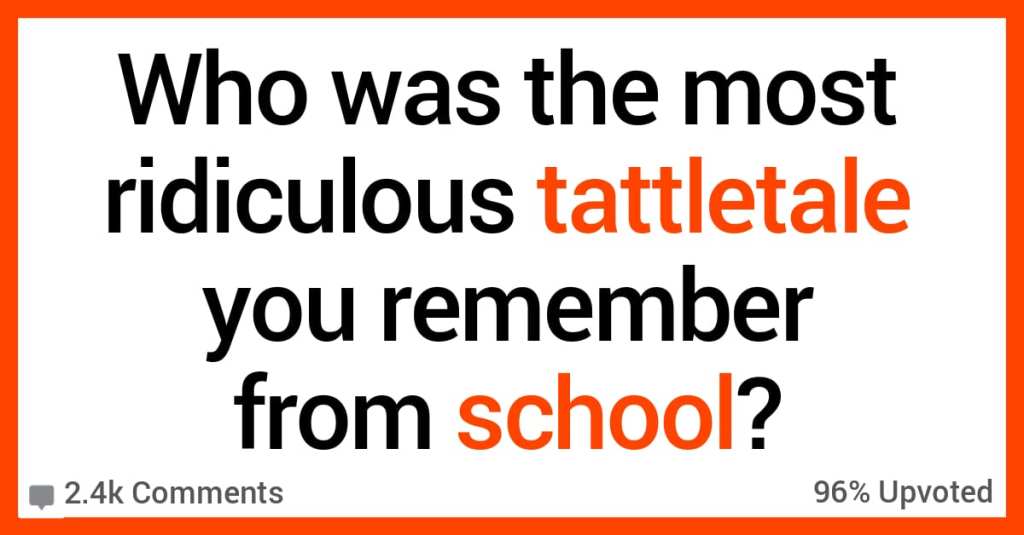 People Recall the Worst Tattletales They Ever Met in School

Never tell on anyone!

I can’t tell you how many times my older siblings said that to me when I was growing up. And it turned out to be good advice because, as we all learned in school, if you get the reputation of a tattletale, you’re not gonna end up having many friends.

Or maybe ANY friends.

Check out these stories from yesteryear from AskReddit users about the worst tattletales that they remember.

“This is a true story. These were two 7th graders, a boy and girl.

Girl: sir i don’t like how this boy is looking at me

Boy: I am literally sitting at the back of the class

The two were sitting at opposite ends of the class and couldn’t make eye contact unless the girl completely turns around. Anyway girl stabs the boy with a pencil and made him bleed like crazy.”

2. Kids sure are adorable.

“I teach first grade. I had 2 boys that loved to irritate one another. The one boy, L kept saying “trains, trains, trains” over and over again. The other boy – B, kept telling him to stop it.

L moved across the room and stared at B. B stared back and then L yelled “do you know what I’m saying in my mind?” B interrupted my lesson yelling “L won’t stop thinking about trains!”

It took over 10 minutes to get them to knock it off.

Longest year of my life.”

“However, when I was in first grade, my sworn enemy (yes I had a sworn enemy in 1st grade; we mutually hated each other’s guts) was telling my classmates that I was picking my nose and eating it, then told the teacher the same.

The teacher asked me if I was and I denied it and started to cry because I said he was saying mean things about me, so she put the kid in the corner for telling fibs and spreading lies.

The reality was, I WAS picking my nose and eating it. I just acted innocent so he could get in trouble.”

“Apparently I rolled my eyes at someone when I was in kindergarten.

I was across the room from the kid so the fact that they caught me looking at the ceiling and made it about them was astonished.

On top of that I couldn’t even defend myself because I had no clue what rolling one’s eyes even meant or implied.”

“In primary school I was playing duck duck goose and I patted this guys head since I thought that he was playing.

He instantly starts crying and saying that I hit him super hard and that he’s got a really bad headache.

He told my teacher and I got yelled at for “hitting another student”.”

6. I hope you never talked to her again.

“I was talking to one of the girls in my class right before we had to do oral book reports.

I don’t know why, but out of nowhere, I confessed to her that I hadn’t read the book but my sister had and she told me everything about it so I wrote the report from there.

As soon as she heard that she raised her hand, shouted at the top of her lungs that I didn’t read the book, and was only pretending I had.”

“In the 5th grade (I’m a twin) during recess this kid asked my brother if he could flip him over his shoulder for no reason, so he did and the kid got slammed on the concrete and got my brother sent to the office.

I got in trouble too due to “association”.”

“My child got tattled on for talking to another friend about a video game that the tattle tale wasn’t allowed to have at his house.

Kid ended up homeschooling because the teacher told the mother she couldn’t ban the entire class from speaking about all the things her child wasn’t allowed to do.”

9. This is pretty funny.

“Preschooler uses a toy phone to call the police on a classmate.

“High school, this girl in my class took it upon herself to tell the principal who among us had nail polish on.

It was a strict school and nail polish was not allowed.

F*ck you Ray, this is why no one talked to you ever again.”

It was so stupid, and it lasted all year.”

My teacher just responded with “Well, Don’t like don’t watch” and continued with the lesson.”

“One kid had a full blown tantrum because another kid had the same jacket as them and they were adamant that both jackets must belong to them.

Even though they couldn’t get the small jacket over their arms. One was a size 2-3 and the other 7-8.”

So, two points about this:

This was an LSAT prep course. Everyone involved are adults, and it’s a 100% voluntary course. If the dude wants to leave, OK, he leaves.

Also… he’d spoken to me beforehand. He had a solid medical reason for leaving early, and I’d email him with the stuff he was missing.

Who was the biggest tattletale that you remember from growing up?