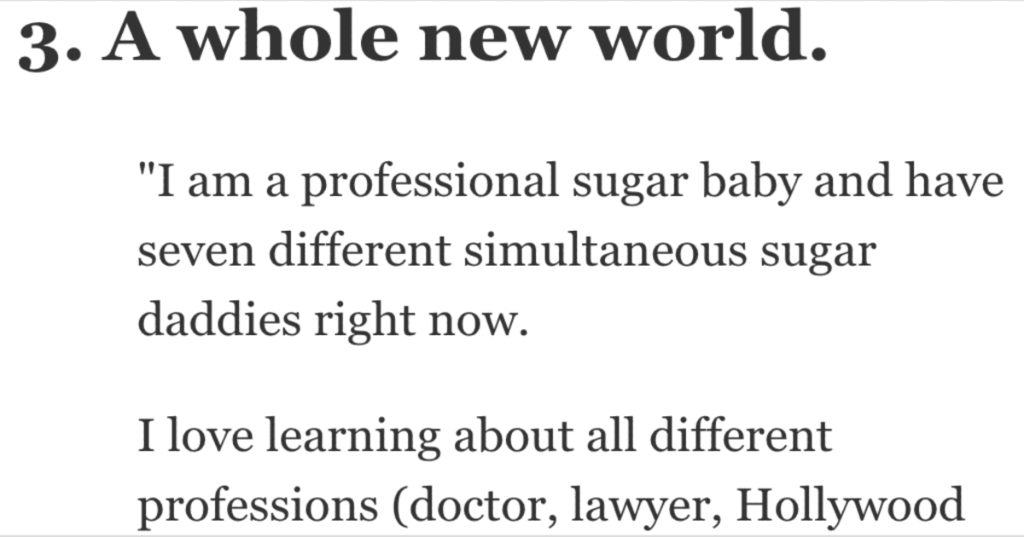 We all have different life experiences, right? That’s especially true when it comes to relationships and dating, so if you’re not someone who has found themselves in a “transactional” relationship – one where assets of one kind or another are exchanged – then you might be curious what it’s like.

Luckily we have this little thing called the internet, so please enlighten yourself with these 14 interesting posts.

“It started out seeming like innocent fun and a way to make a quick buck. The shopping and trips were exciting for someone that grew up poor. It made me feel powerful to be sought after and have men willing to pay to be with me…at first.

By the end, it left me with much lower self-esteem in myself as a person, and unhealthy beliefs about men and relationships. Beliefs like: S*x is transactional, s*x is an obligation, men only want you for your looks/youth, women lose value as they age, men will cheat/leave their wives as they age for someone younger, etc.

Once you’ve seen how many men are not attracted to women their own age and are willing to cheat on their wives of decades like it’s nothing, it loses all glamorous appeal.”

13. Everyone wants to feel valued.

“Aside from the s*xual stuff that their ex-wives never would perform on them, most sugar daddies think of me as their personal therapist and spend lots of time talking about their lives, problems, dreams, etc., and truly enjoy having someone really listen to what they want to express.

They also ask for feedback and advice, too, which makes me feel valued and wise.”

“I’m currently working as a sugar baby to help with college. Some experiences haven’t been so good, with the men I work with pushing boundaries and doing things they didn’t have permission to do and so on, but some of it isn’t so bad.

I charge by the hour (for my company, no s*x), and it’s really helped me pay for textbooks and stuff. One of my clients is getting emotionally attached, though. Last time we met, he offered me, in order: an all-expenses paid trip to Vegas (upon realizing I’m too young to gamble legally, he changed the offer to a cruise) and finished off with a house.

I didn’t accept, because I don’t trust him that much, but still.”

“Most of my sugar daddies have really crazy work schedules, which is how they became so financially successful in the first place, so normal methods of dating are too time-consuming.”

“They don’t have time to text/call a real girlfriend every single day, so this transactional arrangement lets them contact you as frequently or infrequently as they want to without the girl being offended or neglected.

There is a lot of flexibility in this type of dating, and a lot of standard courtship etiquette is not required.”

“I joined a few sugar baby websites last year simply because I wanted to marry a wealthy man, and the sites provided the dating pool where I could find one.”

“I want to be a stay-at-home mom, and my city is very expensive, so you pretty much need to be wealthy in order to raise a family on a single income. I went on dozens of dates with men ages 26–50. My takeaways are this: Successful men who are ‘self-made’ are usually the most interesting and well rounded.”

“Transactional arrangements are very straightforward, and all the cards are on the table. There is no beating around the bush or uncertainty.

The sugar daddy is guaranteed a goodnight kiss (and probably more), and the sugar baby will get a fancy dinner, vacation, tuition, etc.

It’s refreshing how black and white it all becomes.”

“Any financial benefit was far outweighed by the risks and damage to my emotional self and beliefs about relationships. It’s been incredibly hard trying to believe I’m worth more than my looks and body, and as I’ve gotten older, left me with a fear of aging as a woman.

I regret doing it, and wish I’d had older people in my life looking out for my best long-term interests, not just trying to f**k me.”

“Once someone reached out to me asking if I was interested in being his sugar baby. It was my dad.”

“Most of the sugar daddies I’ve met are just busy and want the s*x/companionship of a relationship without all the responsibilities of being a boyfriend. Many of them actually DO want a wife, but one who admires them and is pleasant and submissive.

They often complain about having bad experiences with gold-diggers…go figure!”

“A couple college friends and I were a couple weeks into lockdown and bored out of our minds, so we made Seeking Arrangements accounts just to see what would happen. Lockdown felt like a safety net that gave us an excuse to not meet up with anyone. I spoke to some genuinely lovely men who really were just lonely.

I was sent money to help with expenses and a designer bag. I also spoke to some horrible, twisted men who clearly had an unhealthy relationship with power and s*x, who felt entitled to my body and my time.

Being a sugar baby could be very rewarding for the right person, but you have to be careful and stand up for yourself. If you’re going to meet up with anyone, have a multilayered safety plan in place, and always trust your gut.”

“Like regular dating, you go through plenty of first dates before you find a good sugar daddy who matches with you. My rule was that I had to chat with the SD online first and we would have one casual date over a drink with no expectations.

I learned quickly that I had to stand up for myself and be blunt about my financial goals. Eventually, I met a guy who I clicked, with and from our very first date, I was crushing hard.

Due to work, he didn’t have time for a regular relationship, and I certainly didn’t want a boyfriend hanging around. He’d have his driver come pick me up, and we would go for cocktails, then back to his five-star hotel room. On our first date, we had two bottles of Cristal, which cost more than my monthly rent.

We dated for more than a year and after several months, and I let him know the gifts and money weren’t necessary — I would have dated him without any of that. Sadly, the relationship came to an end when I moved countries, but we still remain in touch and in lust!”

“I am a professional sugar baby and have seven different simultaneous sugar daddies right now.

It opened up my world to so many new experiences, cultures, and ways of life.”

2. There are plenty of good experiences.

“I looked into doing it a few months ago and found that a lot of the men were actually pretty young.

I know the stigma is that sugar daddies are only old rich men, but I was approached by quite a few younger guys, and honestly, they were all BY FAR nicer, more honest, upfront, and chivalrous than any man I’ve met on a regular dating app.”

1. That definitely took a turn.

“When I was 19, I had a sugar daddy. I was in college and needed to pay loans.

This man, who was like 68 or something had reached out to me and I *JOKINGLY* replied. I am now 32, and we are married!”

It’s like a little peek behind the curtain of other people’s lives, right?

If you’ve got a story or interesting tidbit to add, please do so in the comments!