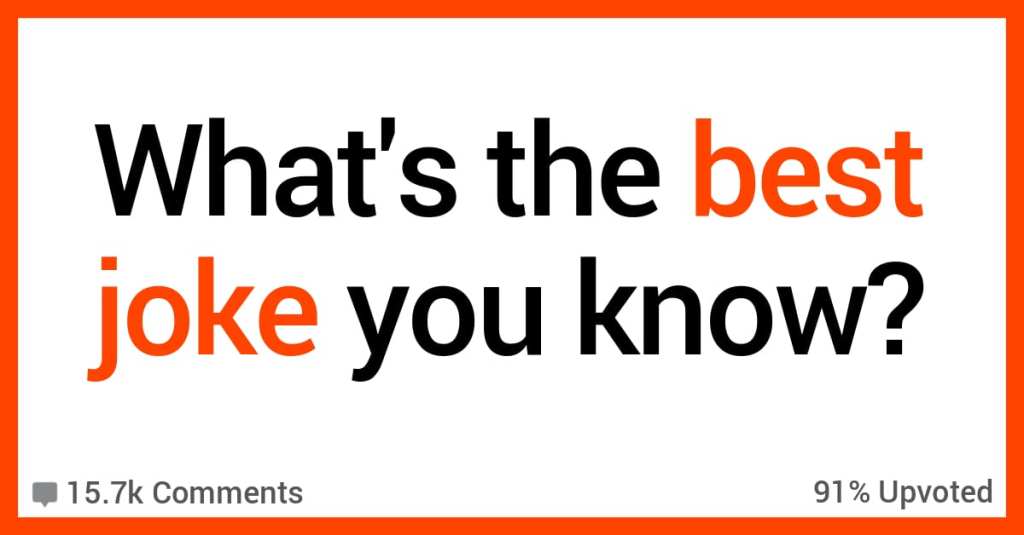 Hey, we got an owl on our hands, here!

Okay, that was totally lame, but that is, technically, an example of a joke. Are you ready to hear some more?

What’s the best joke that you know?

“Two guys are walking down the street when they see a dog licking his balls.

The other replies, “… well maybe just try petting him first.””

“A penguin is on a long-deserved vacation from the zoo. He decides to take a road trip out west, where his car breaks down. Luckily, it’s right in front of a mechanic in town.

He drops the car off and tells the mechanic he’s going to get some lunch. Its a really hot day, so after eating he stops by the ice cream shop for a little treat.

Walking back to his car, the mechanic tells the penguin “It looks like you blew a seal.”

“I had a song stuck in my head the other day and kept singing it out loud.

My wife finally broke down and screamed Will you please STOP singing Wonderwall!?

“What did the sign on the door of the brothel say?

“People are shocked when they find out what a terrible electrician I am.”

6. Not sure if younger folks will get this…

7. The island of cannibals.

“One day 3 people were stuck on an island with cannibals. The cannibals said, “if you do what we say, we wont kill you”. S

The second person came back out of the forest with 10 cherries. the cannibals said, “put the cherries up your *ss without making a facial expression”. The person then started laughing on the tenth cherry, so they killed him.

He walks up and asks the man: “Does this dog really talk?”

Dog: “Yeah, I started out in the circus as a sideshow, until the CIA found me. They recruited me as a spy. No one suspects the dog in the room is listening to state secrets. After two tours, I retired here in the country to live out my days.”

Man: “My god, man! That is the most astounding thing I have ever heard! So, why the hell are you only selling him for $5?”

“The divorce court judge says to Mickey “Now let me get this straight Mr. Mouse, you want a divorce from your wife Minnie because she’s crazy?”

“Three men went to Hell, and they stood before the Devil.

The Devil asked the first man, “WHAT DID YOU DO FOR A LIVING?”

The man answered, “I was a lumberjack.”

The Devil said “THEN WE WILL CHOP YOUR PEN*S OFF.” He turned to the second man, asking the same question he asked the first.

“I was a fireman,” said the second man.

“THEN WE WILL BURN YOUR PEN*S OFF,” said the Devil. He turned to the third man, asking the same question he asked the other two.

The third man thought about it, and finally answered the Devil:

“I was a lollipop salesman.”

“A pair of hunters from Illinois are out in the woods.

Whilst decending a hill one of them suddenly cries out in pain and falls to the bottom, clutching his chest as he hit the ground. The other hunter rushes to his side as his friend noticeably stops breathing. Pulling out his phone he quickly dials 911.

The dispatcher hears some rustling over the phone followed by the resounding boom of a 12 gauge. The hunter comes back on the line asking, “Okay, now what?””

“What do you get if you insert human DNA into a goat?

Kicked out of the petting zoo!”

13. The priest and the plumber.

“Priest and plumber go golfing. It’s the last three holes after a close round.

Plumber misses his swing and curses “bugger missed”. The priest is mildly offended and chastises him “you shouldn’t curse in the lord’s presence”. The plumber laughs it off and looks furtively over his shoulder.

Next hole, the plumber is distracted and goofs on the putting green. He can’t help but curse “bugger this!”. The priest scolds him “i told you, if you curse again may the lord strike you down”. The priest takes the lead.

On the last hole, the plumber is sweating from the pressure, practicing his putting move. One points separates them on the green. He swings… connects… and the ball rolls on the lip of the hole and pivots off target into the sand bunker. “f*ckin f*ck!” the plumber rants.

Before the priest can chime in a mighty rumble is heard, the thick clouds overhead part and a bolt of lightning screams through the air. The priest is struck dead and a voice from the clouds says “bugger, missed”.”

In the comments, please share your favorite joke with us.