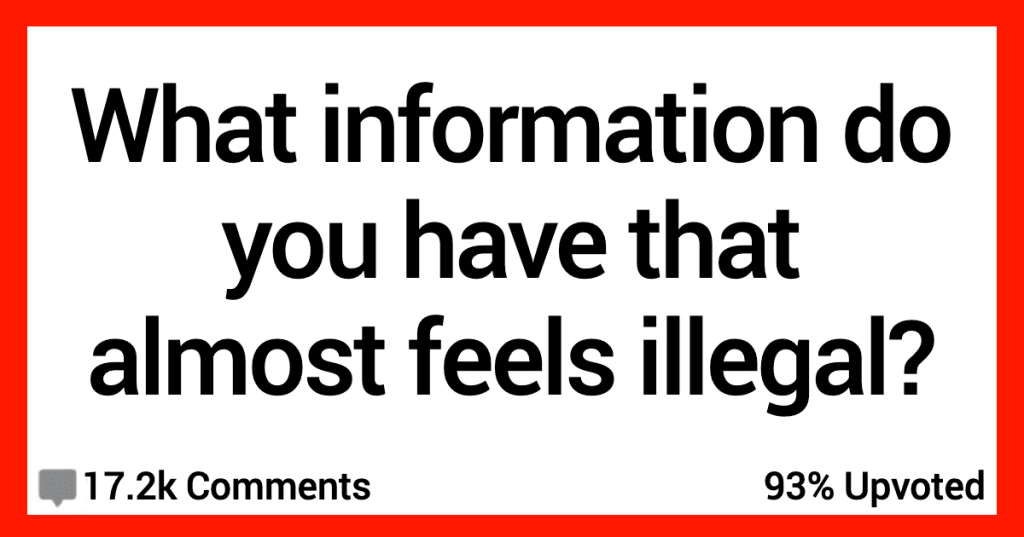 You know what I’m saying?

Today we’re going to hear from some folks about the information they have that almost feels illegal.

“When I was a kid, my dad taught me how to pick a lock. I became very interested in different kinds of locks and purchased a lock pick set.

I practiced for years and became pretty good at certain types of locks. So over the years every now and then, if a neighbor locks themselves out of the house or a friend loses the key to a padlock or a lock box I’ve been able to help.

But the reactions I tend to get from people, even while I’m helping them with their lock is mainly one of mistrust. I’m not a cat burglar. I just like locks.”

“This is England knowledge, other countries may vary.

If you are struggling to pay bills, make water the first one you skip.

Access to water is protected by law so the utility supplier cannot cut you off.”

“You can ask scientists for their research paper that you usually have to pay money to view in a journal.

They are allowed to just email it to you no questions asked and they like to do it!”

“The lion at The Animal Kingdom safari ride at Disney World isn’t chained.

He is fed a huge piece of meat every morning and sits on a rock that is changed to the perfect temperature for him everyday so he has no reason to attack anyone on the safari ride.”

“Unionization saves you more money than it costs you, you cannot be punished for attempting to do so, and it is NOT in any way illegal, rude, or improper to discuss your salary with your coworkers.

It feels illegal because every company on the f*****g planet has tried to make people think unions are evil monsters trying to get you to pay union dues for no return.

This is false because union dues are much less expensive than a company underpaying you and trying to work you to death, which a union fights against.

Unions are there to prevent worker exploitation, stop it if people were being exploited when they got there, and get you a fair wage that will actually let you live off of one job instead of needing 4-5 or to work criminal amounts of overtime.”

When in liquid form it is stable but once it dries so much as a fly landing on it creates a purple smoke explosion. It’s so unstable that alpha radiation can be used to detonate the stuff.

It’s actually easy to get the materials and create the stuff. Filled my high school hallway stairs with purple smoke on the last day of school.”

“Police are allowed to lie to you.

So are military recruiters.”

“One thing I learned is in the state of California if you are squatting a property for five years and have been upkeeping it with proof, you can file a claim of ownership with the courts and take over any property as long as it was deemed that the original owner never tried to remove you within the same timeframe.”

“It is legal to grow opium poppies in the United States, but only if you don’t know they can be used to make drugs.”

“Hospitals have but don’t tell you about a program to reduce your bills depending on how much you make.

You can go to their website and find a usually hidden link for financial assistance policies and really cut your bill down.”

“Well, I gave my 9th grade chemistry class a detailed report on diacetylmorphine (her**n) for a project about organic molecules, including how to make it.

It was pretty interesting to do and fun to present, but I feel like I broke the law somehow.”

“When you have a debt with a collection agency you can pay the debt and then call back a few weeks later and say, “I was told when I called and paid that you’d remove this from my credit score.”

And then you ask for documentation saying they’re gonna do it. Apparently collection agencies don’t keep super good records on stuff like that; they just want your money.

It worked for me, and I hope it can work for you if you need it in the future.”