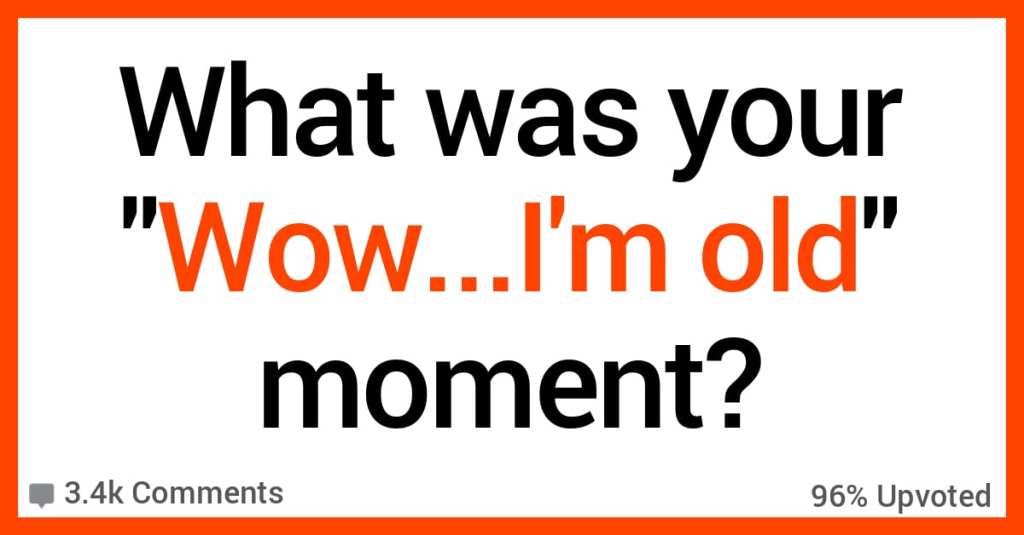 I’m talking about when it suddenly hits you and you say to yourself…wow, I’m old.

I think for me, it came when I tuned into the Grammys a few years back and had absolutely no idea who any of the people were that were performing or getting awards.

Totally had no clue.  Also, I thought it all sounded horrible and that’s when I realized that I am an old man now. So I guess I might as well check into the retirement community ASAP…

Here are some funny and interesting personal stories from folks on AskReddit about when they realized they were old. Let’s check them out.

1. Shouldn’t have said that out loud.

“I was telling my students that I graduated from high school in 1973 and one yelled out “my mother wasn’t even born then!””

“I heard some younger kids I worked with talk about how they wondered what it was like to live through 9/11.

I mentioned that I was alive during the attack and they asked me to tell my story. Like I was a WWII or Vietnam vet.

It hit me that I was a part of a completely different generation.”

“Remembering that I used a typewriter when I was in kindergarten.

Also remembering when one of my teachers during elementary school said, “Some day, it will be more unusual for a person to not have a personal computer than to have one”.

That was back when they had those old DOS computers at the school.”

The Blue Album came out 26 years ago.”

“I helped raise my nephew. I held him when he was born, read to him, changed the diapers, and taught him how to read.

He’s about to graduate high school now. I still can’t believe it. The little girl I used to babysit as a teenager just got married and had a baby.

Seeing all the people I think of as kids growing up has been insane. I can’t get over it.”

“I was working with two co-workers recently that had never heard of Wayne’s World, and had no idea what song I was talking about when I mentioned “Bohemian Rhapsody.”

“I just found out that laptops don’t (standardly?) come with disk drives anymore.

But how do they burn their music onto the cdrw??”

“At 35 last year my feet just started to have chronic pain every time I woke up in the morning.

Went to several doctors and did a ton of testing and the answer was, “there’s nothing wrong with you that concerns us.”

And here I am thinking, “do I really have to live with this for the rest of my life?” And the answer is yes.

I wake up, my feet hurt and then an hour later they’re fine.”

“Catching up with an old friend.

She remarked, “Notice we’re talking more about our latest doctor visits and less about the new Star Wars movie?””

And another user asked what show it was.”

“When I found myself standing outside the mosh pit checking people for injuries as they got flung my way and guiding some to the safe zone.

I used to be in the middle, now I’m the Mosh Mom.

If you’re missing a shoe, I’ve probably got it.”

“I realized I understand very little of the slang younger people use, and I don’t have any particular interest in doing so.”

“In Friends, Rachel had a baby, and in one episode they were recording a message that would be shown on her 18th birthday…

I saw a clip recently of this episode with Chandler saying “The year is 2020″….yea…the baby on Friends is 18 years old this year.”

“When I can still remember when Enron caused rolling blackouts in my state.

Ad when the younger generation has no idea what Enron is.”

“I read that the 2028 Olympics will be in LA and thought “wait, they were just there a few years ago”

It’s weird because I so clearly remember my brand new Sam the Eagle adidas sports bag that I get for a recent birthday.”

When did it hit you that you are definitely no longer a young person?

Tell us your stories in the comments! Thanks in advance!