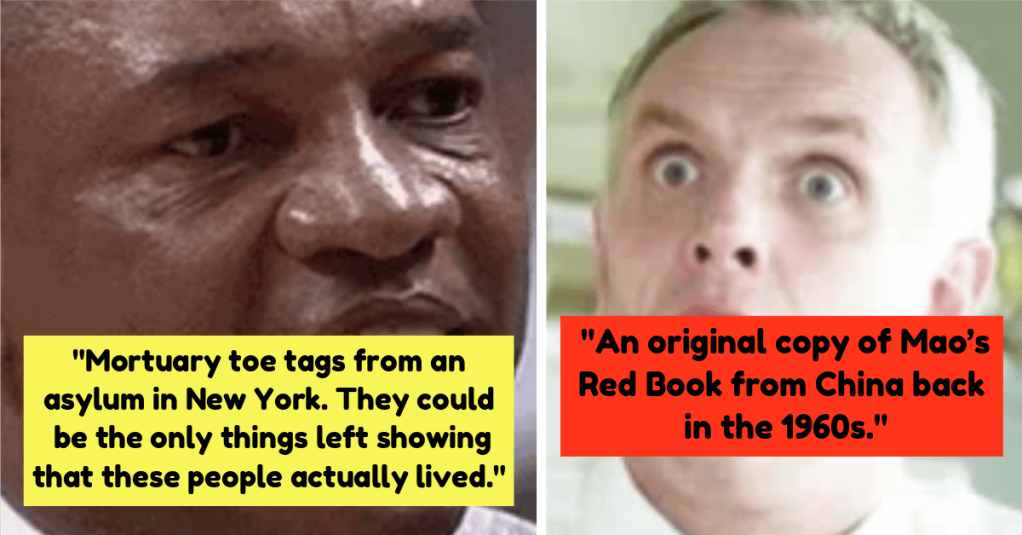 Do you own anything controversial?

Like something that you’d be embarrassed to show a large portion of the population?

And as long as it’s not going to blow up your house or something like that, you probably don’t need to worry about it.

But, I will also add that I’m not a lawyer, so you might want to look into that…

What’s the most controversial thing you own? Here’s what AskReddit users had to say.

“Mortuary toe tags from an asylum in New York.

Like twenty or so of them…I think they could be the only things left showing that these people actually lived.”

“Troll dolls were very big in the early 90’s.

I have a Confederate soldier troll doll in full uniform with flag in hand.

“An original copy of Mao’s Red Book from when they were distributed in China back in the 1960s.”

“I have my grandfather’s Hitler Youth knife.

He was 12 when the war ended but he spent the last year or so of the war on a U-Boat basically as an assistant.”

“My parents had an actual elephant foot turned into a table.

Like an actual foot cut from an elephant and taxidermied made into an end table. Had a glass table top.

You could feel the thin hairs on it.”

“I bought a used Bill Cosby comedy album on vinyl and the next week everything started coming out about the horrible things he had done.”

“I have a wood carving of a Peruvian warrior holding the head of a warrior he defeated, standing on the headless d**d body.”

It was my brothers ex’s and when they broke up she just left a whole bunch of stuff with him, so he gave all of it to me including that coat.”

“A packaged stick from Afghanistan that claims to cure all known illnesses, including cancer, if you rub it on you.

I traded an energy drink for it.

I think it’s pretty controversial since I now own the cure for all ailments.”

“As a joke I told my mom I wanted my dogs testicles in a jar after we had him neutered.

She took it seriously and now I have had my dogs balls in a jar for almost a decade.”

“A small diary/journal written in Japanese with small letters also in Japanese in it. My grandfather fought in WWII in the Pacific. He gave the journal to my father before he d**d.

He said it was from a Japanese officer that he k**led. My father said he was very shaken and seemed deeply disturbed by the memory. He made my father promise that he would never look to return the journal to the family or try to look into it.

My father has now passed and I have the journal. Creeps me out.”

A friend gave them to me days before he d**d of cancer.

They belonged to his dad.”

What controversial things do you own?