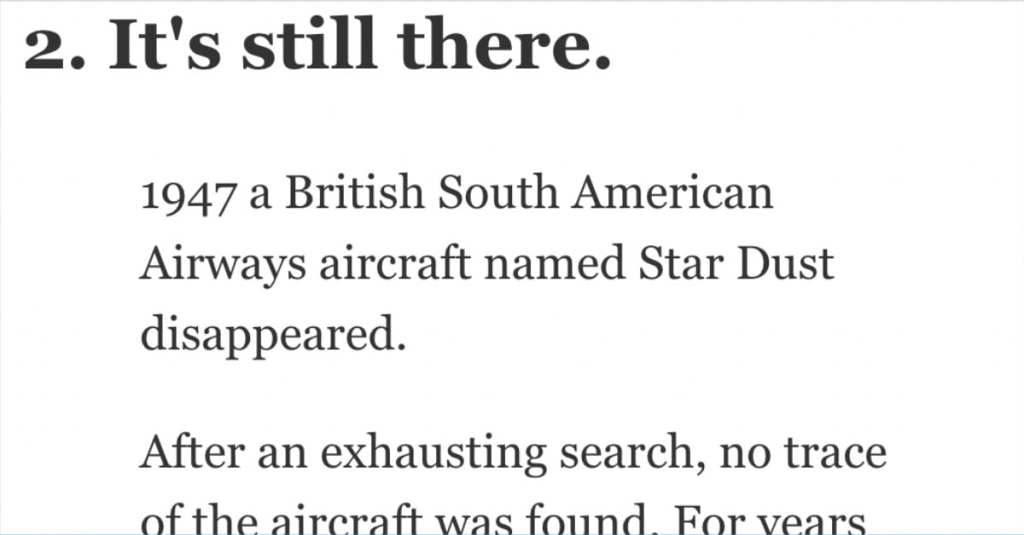 If you’re like me, you can’t get enough of the “murder shows” on television, or the murder podcasts that proliferate online. There’s something fascinating about a mystery, but I don’t know…if they haven’t been solved yet, it’s a bit unsatisfying.

That’s not so with these 13 mysteries, because we know exactly whodunnit – so if you haven’t heard of these 13, you’re in for a treat!

In 1964, Jim Templeton, a fireman from the English city of Carlisle, was spending an afternoon out with his family when he snapped a photograph his young daughter without much thought. But when he got home and had the film developed, he noticed what has now become known as the the Solway Spaceman. The photo shows what many people say is a person in some form of space suit. Kodak even analyzed the photo and their experts said it was authentic, lending to the spaceman theory.

The spaceman was his wife with her back to the camera, he was only able to see 70% of the frame and didn’t realize his wife was in the background of the picture.

12. Not so creepy in hindsight.

In 1997 a really weird and loud noise was detected underwater and everyone was all “WTF was that?”.

In 2012 it was determined it was an iceberg breaking and/or rubbing against the seabed.

When I was a kid in the 80s, all that was known were the bones of the arms with enormous claws. Hence its name, “terrible hand”. They were mostly shown grasping a small car because they were so freaking huge. The rest of the animal was a complete mystery. Was it like a giant Allosaurus, one that’d make the T-Rex look like a puppy in comparison? A few years later it seemed more likely to be ostrich-like and an omnivore. Either way, given how rare it is for fossils to form at all, I was convinced I’d die never knowing what this dinosaur actually looked like.

Then surprisingly in 2014, they found more bones and it was just the weirdest thing.

10. How could family not recognize him?

Benjaman Kyle. Man found beaten behind a Burger King with sever amnesia. It was a fascinating mystery until it was solved, then it was kind of sad. He had made TV appearances, had a couple of AMAs on Reddit, but no one could identify him.

When his identity was discovered, William Burgess Powell, there was still a 20 year gap in his life from 1984 to 2004. There’s no record he had done anything. He had distanced himself from his family and had no friends, which is why no one recognized or identified him from his TV appearances.

Another science mystery: Back in the 1800s, evolution theorists had predicted the age of the Earth to be several milliard years, since this would have been necessary for the current life forms to have evolved. But Kelvin, the number one superstar of physics at the time, had used thermodynamics to calculate the age of the Earth based on the temperature of its insides, and he said it was quite a bit younger. This was a mystery for many years, and was considered one of the major flaws of then-current evolution theory.

It was not until the early 1900s they found the answer: Radioactivity! Decays of uranium and other radioactive elements are heating up the Earth, so the cooling takes longer than expected. The biologists were right all along!

But when the scientists who made the discovery were about to present their findings, who’s sitting at the back of the lecture room? It’s Kelvin! Now an old man, he’s still alive and has come to watch their presentation. They were terrified at the idea of having to stand in front of the Lord of Physics himself and basically explain why he was wrong. But to their great relief, he immediately fell asleep.

I think about this when I myself fall asleep in physics class. It happens to the best of us.

While it doesn’t give us who the Zodiac killer is, just recently his most infamous 340 cipher was solved after 51 years.

According to Oranchak and team, the message reads:

So, in the early 2000s, someone posted new wave music that had been initially recorded off a German radio station on cassette around 1985. It contained about a minute of a song that became known as “Stay, the Second Time Around”, that no one seemed to be able to find any more information about.

This became a pretty famous “earworm” internet mystery, until 2013 when folks on Reddit discovered the actual song and artist. It turned out it was a song by Swedish artist Johan Lindell titled “Up On The Roof” that never became any kind of hit, and up until that time, had never been re-released after the original analog release.

Dan Rather was attacked and beaten on a New York street by two men who kept demanding, “What’s the frequency, Kenneth?” He was rescued by a doorman, and the two guys got away. For years, no one knew who they were.

Then a man invaded NBC Studios and killed a stage hand. When captured, he explained that the networks were beaming radio messages into his head. He wanted to know the frequency they were using so he could jam the signals. Dan Rather was shown a mugshot and positively identified his attacker.

Here’s a New York Times article on it.

5. That will give you nightmares.

This one is strange.. A guy is out drinking with friends late at night and leaves. He starts wandering the streets, and a CCTV sees him enter a cull de sac, then he’s never seen again.

Some think there is foul play, since an accidental death would at least result in a body.

But then family and friends reveal that he had a very strange habit of sleeping in garbage bins when he was drunk.

A few hours after he entered the cul de sac, the garbage truck came and picked up the bins. Later, after looking at the logs, it turns out that one bin weighed several hundred pounds more than it should have. But that was only recognized after it was too late.

Mark Felt was Deep Throat , the key source for the journalists that pursued the Watergate story.

Met him once in the 80’s – he was a connection through a business associate of my father’s. When it came out that Mr. Felt was DT, my dad called to remind me of the dinner we had when I was a kid.

I don’t remember much other than the intimidating vibe. The type of guy who, even as an ~8 yr old, I didn’t need to be told to mind my manners. I just did because he was scary. And his wife wore a hat with a fake bird in it.

3. Some amount of closure.

The murders of Jay Cook and Tanya Van Cuylenborg.

A couple from Victoria BC went on a short trip to Washington state in 1987 and were murdered. It remained unsolved until 2018 when a genetic match from the semen found on Tanya was found.

The story was of interest to me as I live in Victoria and remember the story on the news when the murder happened when I was a young kid. Between 2010 and 2015, I actually worked with her younger brother. He grew up and became a lawyer. Very nice guy and was so happy for him when they announced it was solved.

After an exhausting search, no trace of the aircraft was found. For years conspiracy theories and talk of Alien abduction by wackos circulated.

Till 1998, when mountain climbers on a remote mountain found an engine, pieces of metal, and clothing at the bottom of a glacier on the side of Mount Tupungato. Turns out the aircraft got caught flying the wrong way in the jet stream while it was flying at night and using a system of timing when to start their decent. Being in the jet stream reduced their airspeed in relation to the earth and they smacked themselves straight into the side of a mountain, after which an avalanche covered the wreckage.

The wreckage took decades to flow down the side of the mount with the glaciers. The glacier preserved the wreck so well that 50 years later the recovery team found identifiable remains, personal items, and could read serial numbers on the engines. Amazing one of the landing gear tires was still inflated, and that teams continued to visit the site for periodically as more of the aircraft, cargo, and remains of passengers are still emerging from the ice.

The Andreen McDonald case. She and her husband Andre (yes, Andreen and Andre) originally were from Jamaica. They moved up to my town in Texas where Andre was air force and Andreen was a body building business owner. Andre was pretty jealous that Andreen was more successful and was constantly begging/demanding that she make him co-owner of her company. She always said no.

One day he had had it, and “did away with her”. The gym that she frequented, every single morning, got concerned when she stopped showing up. She was very close with the ladies that she worked out with, and even gave them a key to her house. She told them that if she ever went missing, that her husband probably did it, and they knew he had an attitude.

So one day while Andre was out, the ladies went to check on Andreen. Her car was there, her wallet was there, but she wasn’t. They found blood and hair in her bathroom.

That’s when cops were called.

Cops showed up when Andre was home and asked about Andreen. He said she was in the hospital. They asked him, “if she’s in the hospital, how come her wallets here?” He responded simply, “talk to my lawyer”

They got a warrant and were able to search the house further. Saw more leftover evidence in the bathroom, and evidence of clothes had been found burned in the fire pit in the backyard.

So all they could do was charge him with a missing persons deal.

Andre was super snarky about it too. How he’d be proven innocent. How the cops would never catch on.

Little did he realize how loved Andreen was. And how much Texas ranchers hate corrupt and snarky murderers. Crowds gathered daily and were given permission to sweep over rancher’s land for any sign of Andreen’s body.

Just as crowds started feeling defeated, and Andre started to see hope of being release, a rancher was scoping his field. He had heard coyotes out and went to see what could have entised them. Sure enough, he found human bones, later identified as Andreen.

So yeah, proper charges were able to be filed.

So some ask why she stayed or why he felt jealous that she was more successful. Remember they’re from Jamaica. The whole point of coming here was to better themselves, and bring pride to their families. So she was doing great, but because she was doing so good, his family was kind of looking down on him because his wife was better/more successful than him.

And then she stayed with him, mainly because she wanted to try and make sure their daughters life could be as normal as possible. (sucks that that kind of backfired for her, but now she’s being taken care of by her aunt and grandma who both love and support her).

Some of these are new to me, so I need to do some reading!

What’s your favorite solved mystery case? Point us in the right direction in the comments!