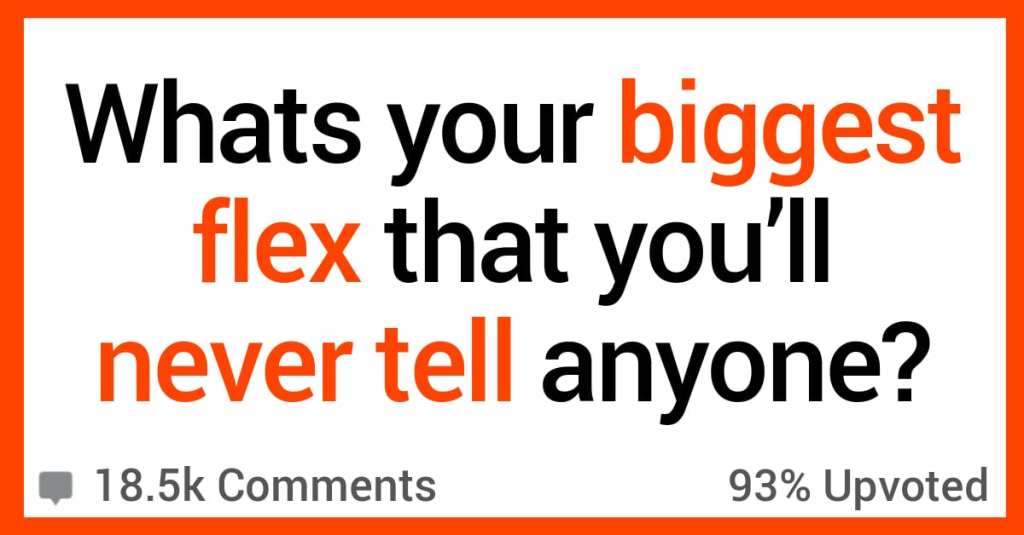 People Share Their Biggest Flexes That They’ll Never Tell Anyone

I enjoy social media just as much as the next person, but you and I both know that some people out there use it to toot their own horn just a little bit too much.

Okay, we get it, you made a nice dinner for you and your wife, congratulations.

But some folks out there prefer to keep it humble and on the down low…until now!

People on AskReddit talked about the biggest flexes that will be their secrets forever.

“I secretly enjoy everyone’s shock when they first meet my wife.

I’m not insanely attractive. I’m a nerdy scientist. My wife is a doctor. She’s funny, driven, she’s smarter than me, she’s 5’9” and could very well be a model, in fact she’s been approached numerous times to move to NYC.

Because we both have insanely busy schedules, We can go months or years without meeting each other’s’ coworkers. My favorite reaction from mine is “that’s your WIFE?!””

“When my girlfriend and I worked at the same bar, I threw a coaster at her like a frisbee. It arced over her and like twenty customers only to land perfectly on the neat stack of other coasters like 50 feet away.

It was so f*cking cool but nobody noticed except one customer who I later had to kick out for taking a nap on the bar. No point in telling anybody, but I look back fondly on that moment.”

I’ve always worked “whatever” jobs: restaurant server, retail, etc. boring kinda wage slave stuff. My living expenses are low, studio apartment and just pretty minimal spending. I live a comfortable life just as anyone would with my paychecks. But I got into investing and crypto currency online about 8 years ago and just got lucky. Spread out among multiple investments I’m at almost $8 mil.

Literally just kinda threw some extra money at stuff in the first couple years and was able to make really good returns. I live the same life I always did, almost doesn’t feel like I earned this money at all. No one knows, parents, family, friends. I don’t want anyone I care about to change their perspective of me because I have this money.

Still working a simple job and living in the same studio. I’m comfortable and happy outside of the money.”

“I beat morbid obesity…which spiraled into a violent battle with anorexia, which I also beat…I eventually went on to get into modeling, weight lifting, and more.

“I live in poverty. I don’t even have a car.

The retail job I work I bike to several times under several dangerous weather conditions, and on a narrow path alongside a busy road.. also 3rd shift, so black at pitch out. A strong wind storm going against you is the worst, BTW, I’ll take rain and snow over that any day.

I’m also the main worker in two of the most labor intensive departments which involves lifting all your heavy furniture items. And storage.

So often I arrive at work after battling storms and harsh conditions, exhausted. I just turned 37. But I show up more often than my coworkers who enjoy the luxury of a car. In fact, I have a near perfect attendance record.

I don’t think people know how far away I live, literally up in the mountain outside city limits. And my boss, who has never worked with me, gave me the worst performance review last year.. because he asked why things aren’t getting done and I told him I have to stock, back stock, pull from backroom, run cardboard, audit inventory and work price changes.

In 2 departments. Essentially, payroll was pushing labor, cutting hours, and I needed help or resources he couldn’t provide me with. So that was my fault.

“I pulled over when I saw a house on fire one morning.

Ran over and a woman was crying that her child was inside. I ran into the smoke and fire, down a hallway, followed the crying. Found the child and carried her outside to her mom.

I waited with them until the FD arrived, then left. Was late for work and got yelled at. Didn’t say anything to anyone.”

“I anonymously send care packages from Amazon and drop off boxes of food and necessities to my hourly restaurant employees who are struggling.

I could get in huge trouble for using their personal information in this way, so I’ve never told anyone else, even my own family. I am limited by corporate or owners regarding their pay rates and hours, but I expect I’ve invested well over $3k in this work in the last five years.”

“I met Nick Offerman at a book signing and he told me “I’m jealous of your whiskers.””

“In 2004, an ex NFL cheerleader that I worked with propositioned me for s*x.

Like “hey, we should leave this bar and go have s*x.”

I couldn’t do it because I was secretly sleeping with another coworker who was at the bar with us.”

“I saved a guys life at a TGI Friday’s while having dinner with my wife.

He was choking on his food and no one else got up to help, so I went over and gave him the Heimlich.

“No one will see this, but you guys I’m so good at building forts out in the woods. I love to hike, find a secluded spot, and build myself a campsite.

I’ll make a fort for myself, build a little campfire, cook some ramen, and live for a couple of hours like the king of the forest.”

“Once while riding my bike to work, I stopped to report a house on fire. The 911 operated asked if anyone was inside, so I nervously approached the front door and heard a “bump”.

I opened the front door and saw an elderly lady collapsed in the hallway. I literally pulled and old lady out of a burning building. I waited with the lady til the fire Dept arrived, then got back on my bike and went to work.”

In the comments, tell us about the biggest flex that you’ve never told anyone.

We can’t wait to hear your stories!