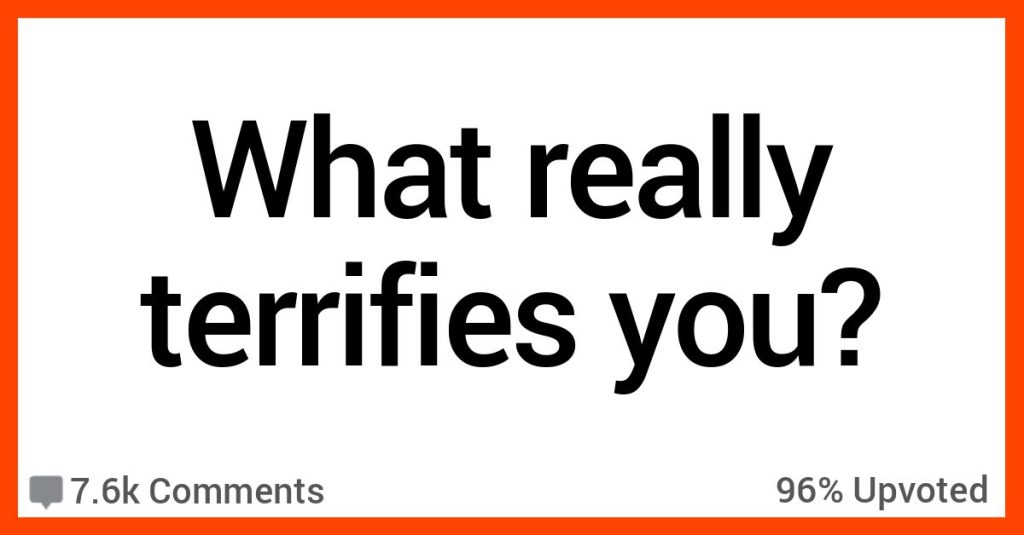 Everyone in the world is afraid of something. If you’re not afraid of anything, I’d honestly have to wonder if you were all there mentally, because the world is big and scary.

Still, different things frighten different people and it can be interesting to hear what freaks people out, don’t you think?

If you’re curious, these 16 people are sharing what it is that makes them want to pee their pants.

They’re like cute hamsters that crawled out of hell.

13. That would be terrifying.

I woke up on my daughters 3rd birthday, and I could not hear out of my right ear. I went to the doctor and after looking at my ear he said he couldn’t see anything wrong. He sent me to a specialist, but it was a 3 month waiting list to get in.

When I finally did, she told me that I had got a viral infection in my ear drums, and if I had come to her in the first 2 weeks, she could have given me a steroid to knock it out. It took me years to get used to having to have people on my left side and using mouth movements to understand what people are saying.

Needless to say, covid has kind of made things worse since everyone has masks on. Now, I have nightmares about waking up, having lost my hearing in the other ear.

Doesn’t sound scary, but trust me it is.

12. At least you’ve identified the problem.

I have the most irrational fear. And it’s brought on by my actual fear of enclosed spaces (claustrophobia)

Anyways my Dad owns a gun safe that’s quite large, I imagine myself going into it to grab something the door swinging closed and locking me in while he’s out of town and no one can hear me scream. It’s a very tight space. Absolutely freaks me out to the point that when I think about it my palms get sweaty and I have to stand up and walk around and think of something else to overcome it. I have to “bring myself back to the room I’m in”…..

Kindve a s*%tty thought that sometimes pops into my head. But sometimes I use it as a mental exercise, where I push the door open with ease. Or I pass through the door like a ghost. Or make the safe fall to pieces as though it weren’t a solid object. Usually I just try to avoid the thought. I feel this could be making my phobia even worse.

Those cave diving videos where people crawl through super tight spaces with no way to turn around, and with a line of people behind them….no….no way I will NEVER understand and I really don’t want to understand. I can jump out of planes. I can go 50+ mph on a long board, I can swim waaaaaay out into the ocean, I can fight, I can sleep alone in a house in a bad neighborhood lights out, but no, enclosed spaces are just the absolute worst thing I can imagine

Apparently am scared of humans more than ghosts.

Getting secretly dosed with laxatives.

The “Weeping Angel” game mechanic as I like to call it. Its the game mechanic where the monster only moves when you look away, meaning the minute you lose track of it you’re dead.

Or just Weeping Angels in general. They may not be able to get you irl, but nightmares are free real estate.

Working in a hospital, I will tell you there are things worse than death.

I’m not afraid of death, I am afraid of being ready for it and not being allowed to have it.

Injuries to the eye.

Not really scared of loosing my vision although that would be awful, just scared of eyeball injuries.

It sucks. But what’s worse, for me at least, is being alone when surrounded by people.

Cancer. I’ve been through a lifetime of pain in my 30 years of living. Been shot at, in car crashes, seen people die. I was the one who discovered my grandma when she passed on Christmas 5 years ago.

But the only thing that scares me is my oncologist telling me that my cancer came back.

When my thoughts start turning suicidal. I never know when it’s coming but it’s usually triggered by loneliness.

It gets so bad sometimes I start to cry and cry and cry because of fear I might actually do something stupid.

3. If you think too hard about it…

Driving. Especially out of town. I do it every day in my own town, and have very few issues, although I do get a little nervous sometimes. But man. Put me on a road trip even just 2 hours away and I’m a nervous wreck. Unfamiliar traffic and driving conditions will never not scare the shit out of me.

2. Through no fault of her own.

The fact that awful shit can just happen. Like some gremlin weasel fuck pours gasoline all over me and then lights me on fire awful.

Is it likely? No, but it is possible.

It scares the s*%t out of me because about 3-4 years ago I felt so young and now I feel so lost.

Y’all, I could have gone my whole life without realizing some of this existed.

What makes you want to pee your pants? Go ahead and freak us out in the comments!