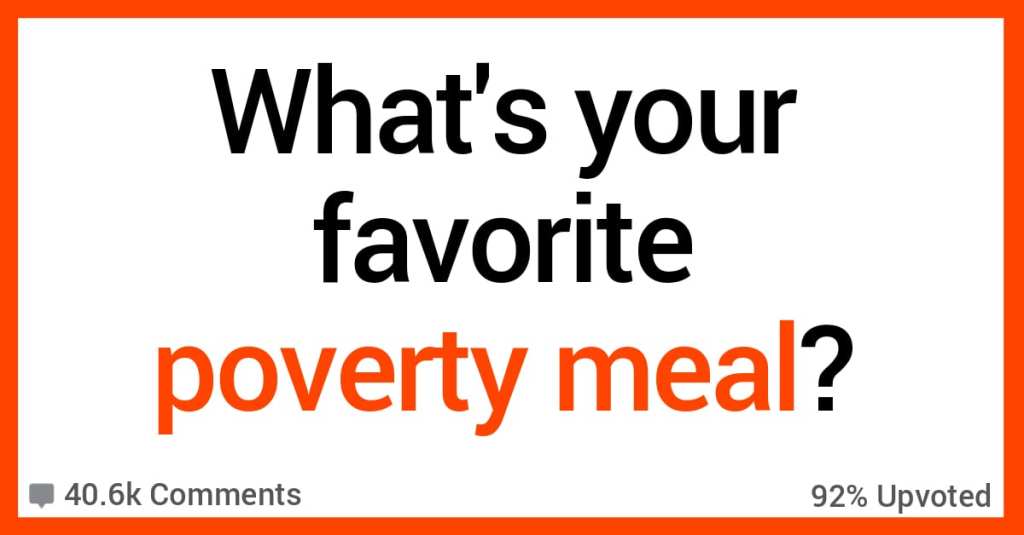 Do you have a favorite “poverty meal” that has stuck with you through the years regardless of how much cash you had in your pocket?

Whatever your preference, most of us do indeed have these culinary delights that stick with us through the bad times and the good ones.

Boiled potatoes with salt and a couple of slices of herring

“Pizza in Italy was originally only eaten by poor people who couldn’t afford proper meals, and so they used the basics of flour, tomatoes and other cheap items to come up with pizza.

However, instead of the meat and other things on modern pizza, the basic vegetables make the pizza just as tasty and I always enjoy eating it.”

“There’s a south indian dish called Kanji, which is pretty much just rice put in water and cooked for a really long time.

Sort of like rice porridge.Then you put different food items and curries inside for flavor.

I still make it all the time, especially when I’m sick.”

“Lentils! Great cheap protein and can be used so many ways. Lentils with curry and whatever cheap veg is around, usually spinach or cauliflower.

Also a baked plantain for a super cheap and filling snack.”

“Fried egg with rice and beans.

I was a missionary in Brazil for a few years and when I would eat at peoples homes they would apologize for that being the only thing they could afford.

I could not convince them that it was one of my favorite meals.”

Boil together until peas start to fall apart.

About 1 buck will give you ten servings. And gas.

But it’s one of my all-time favorite meals.”

A jar of pasta sauce, English muffins, mozzarella and toppings of your choice. Fresh produce is dirt cheap.

The pasta sauce is the most expensive part, and if you make it, and the English muffins at home, each mini pizza is like 30 cents.”

Made a huge comeback in my house at the beginning of pandemic when we were scared, unemployed, and feeling sorry for ourselves.”

9. Listen to this person.

I’ve eaten some of the finest foods on this planet.

Sure, I’ll toss in some avocado now I can afford to, but the base dish stays the same.”

“Peanut butter and honey sandwiches. Containers of both last forever.

Last year, we lost power for 13 days in the rural area I was living in and lost all food. I lived off those sandwiches on rye bread for those two weeks and bottled water. Never got sick of them at all lol.

“In Ireland (specifically Dublin) we have a dish called coddle. It’s a salty white stew from the days of the poor tenements.

It’s made with leftover sausages, bacon, potatoes and variable other veggies and grain such as barley.

It is an ugly dish to look at but it is so tasty, wholesome and filling.”

Any pasta, a scoop of butter, and a dash of salt.”

What are some of your favorite cheap meals that you enjoy?

Tell us all about them in the comments!