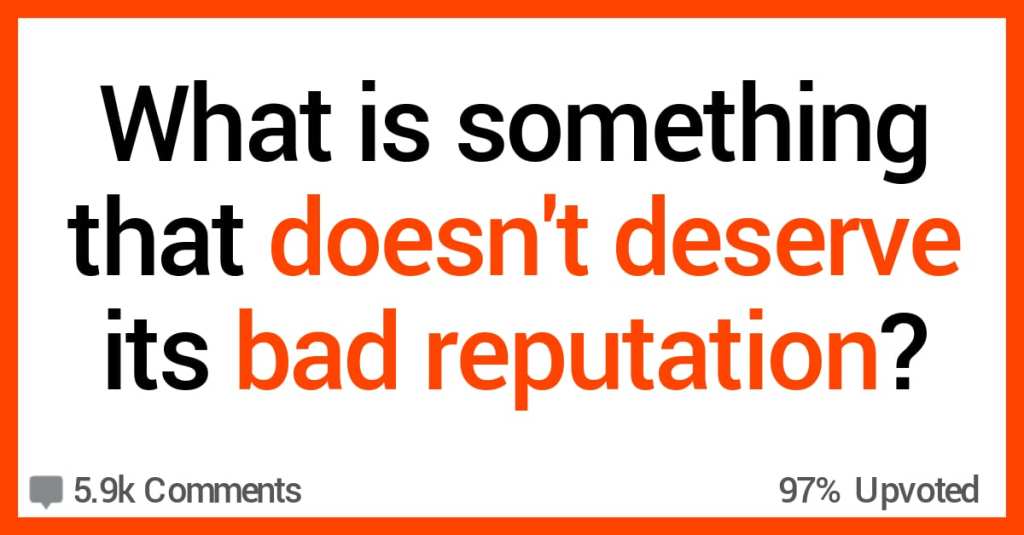 People Share Their Thoughts About What Has an Undeserved Bad Reputation

In the world we live in, some things that aren’t necessarily all that bad get dragged through the mud.

And that can be a real bummer…but it happens…A LOT.

What has a totally undeserved bad reputation?

Let’s see what people on AskReddit had to say about this.

Not only does nuclear power not deserve its bad reputation, we desperately need to embrace its good one.

With our present technology, nuclear power is quite literally the cleanest, safest, most reliable, and most productive option that we have available.

Unfortunately – owing to fears of radioactive fallout and misconceptions about the efficiency of renewables like wind power – folks are unwilling to look at uranium as a solution to global warming, despite it being the best one that we have.

Renewable energy sources are great, and we should absolutely be investing in them… but not as primary sources of power-generation. If we want to save the planet, nuclear power is the only viable avenue for doing that.”

I will advocate for community colleges until the day I die.”

“Fast food workers. I don’t get the “anyone can do it” argument.

Through my time as a manager I’ve turned down applicants for not being up to our standard, and watched all age groups quit because the job isn’t as easy as they expected. It’s a fast paced work environment with lots of memorization due to food safety standards.

I’ve worked production, construction, warehouse, and others but working in fast food isn’t easier than the others, just different.”

Considering how massively complex the system is they generally do a pretty great job and there are usually few legitimate reasons to complain.”

I think when people mention it, their brain immediately jumps to “super bad chemicals that will instantly kill you”…Instead of modifying a plant’s genes just so it could produce more or bigger offspring. Besides, we would probably see less of it if we (speaking as an American here) didn’t consume so much anyway.

And if you still don’t vibe with that sort of stuff that’s cool, but it isn’t as bad as people make it out to be.

What is bad are companies going out of their way to patent genetic codes so that they can bury farmers with lawsuits, or develop seeds who’s offspring will never produce grandchildren.”

“Testosterone is blamed for aggressive behavior, inappropriate s**ual behavior, emotional unavailability and more. Thing is, there is absolutely no proof for testosterone being responsible for any of those things.

Unhealthily high levels can cause aggression (roid rage) but whether somebody is at the high or low end of the range of normal levels has nothing to do with how aggressive or emotional they are, and even less with whether they can control their s**ual urges.”

Just like any movement, the loudest and most obnoxious get the attention but make everyone else look bad.”

Unions serve an excellent purpose in promoting collective action and bringing frontline labor to the bargaining table as a commodity.

Unfortunately, they are often granted monopoly status, allowing them to become corrupt over time.”

“Spiders and bats have a pretty bad rep. People seem to think they’re no good creatures that are creepy and are gonna suck your blood or bite you for no reason, when they actually help keep populations of flies, mosquitoes, etc. at bay.

Without spiders and bats, we’d be so screwed. There would be an insane amount of bugs everywhere and you’d probably have to wear a net regularly when going outside. I personally like bats more then spiders, since i’m terrified of them for no real reason besides the way they look, crawl and honestly they’re eyes are pretty creepy to me-but I still appreciate all that they do for us.

Oh also fun fact, if you’re afraid of bats sucking your blood, only 1 species of bat does that! It’s called the vampire bat, and even though it drinks blood, it only really drinks the blood of cows, goats, and other animals. They don’t like human blood and are kinda cute in their own way.”

It’s a hell of a lot cheaper and the commute can take just ask long to the city.

Also, it doesn’t need to always be compared to it’s relation to New York, like being broke in NYC is so much better.”

It looks like gross, gelatinous, molded ham product in a can. why would anyone eat such a thing? But prepared well it just hits a spot few things can. Slice teriyaki spam and grill in a skillet until the outside is crispy, serve on Hawaiian rolls as sliders, or on rice with nori as spam musubi.

Chop some up with gold potatoes and onions and cook it in the cast iron skillet for a delicious SPAM and potato hash to serve with eggs. I used to think it was just weird apocalypse food, but it turns out it is really tasty.”

He’s out here doing the most with a charming personality and being kind to everyone he meets in his shows… but we were too busy simpin’ over Anthony Bourdain being a bad boy with everyone.

I love Anthony too, RIP, I think they deserve the same level of admiration.”

What do you think has an undeserved bad reputation?

Talk to us in the comments and tell us what you think.