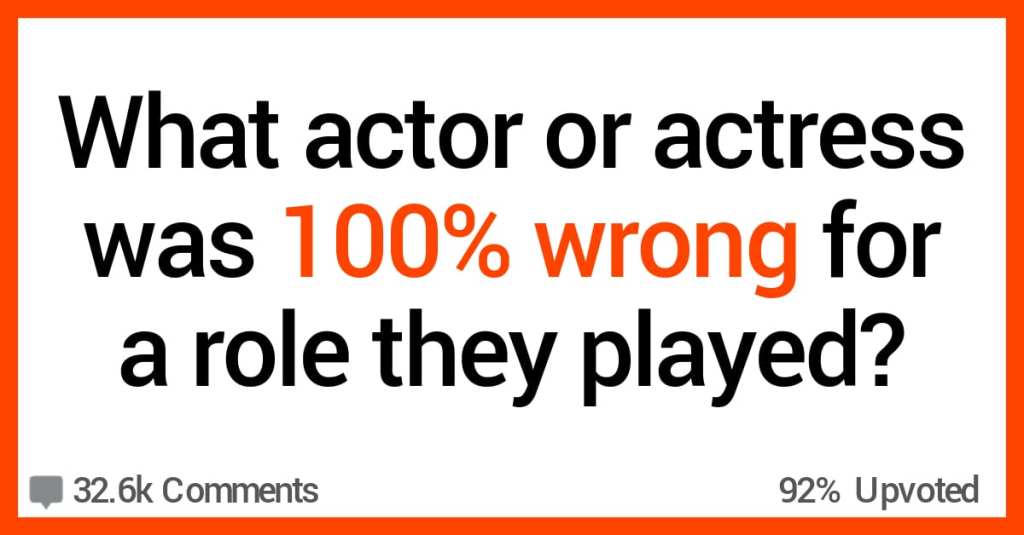 Have you ever been watching a movie and thought to yourself, “why was this person cast for this role? What were they thinking?!?!”

It happens all the time!

But I guess there’s bound to be some misfires out there in the world of moviemaking, right?

What actor or actress did you think was totally wrong for a role?

“Everyone in The Last Airbender movie.

specially considering the fact that they took the Waterbenders (canonically the nation with the darkest skin coloring) and made all of them white, then made the Firebenders dark-skinned.”

“Steven Seagal as a person who can kick *ss.”

“Jamie Dornan and Dakota Johnson in the 50 Shades trilogy

Aside from the movies being absolutely sh*tty, the two had no chemistry with each other and it was awkward as hell to watch.

More so when I found out that Jamie was married while filming those movies. The movies shouldn’t have even been made.”

4. Awesome except for him.

That move is pretty awesome except for him, it felt entirely miscast and I couldn’t believe this guy was the kind of character they were making him out to be.”

“The movie hasn’t even come out yet but Kevin Hart is playing Roland in the new Borderlands movie.

I can already tell you right now, it’s gonna be a terrible f*cking time.”

That is just wrong on so many levels, I don’t know where to start.”

“Is it now the time to talk about Topher Grace as Eddie Brock/Venom?

Who in the ever loving f*ck decided it would be a good idea to cast ERIC FOREMAN as Venom ???”

It’s the only time I’ve really been pulled out of a movie because the casting didn’t seem right.”

Not because of the whole situation around it, but after reading the books and the cameos in Potter, I just don’t see him as Grindelwald, just as albino Depp.”

“Shia Leboeuf in The Crystal Skull.

That part should’ve been Short Round as an adult.”

“Why the f*ck was Jessie Eisenberg cast as Lex Luthor of all f*cking things?

All depictions of him are of a tall, bald, and lean businessman.

No disrespect for the actor, I’d take such a high paying job too, but whoever thought of casting him is a clown.”

“This might be less obvious but I hate Dwayne Johnson’s portrayal of Hercules.

He has the perfect body for it yes but it doesn’t mean he embodies the character.

I have the perfect body to play Lemony Snickett but doesn’t mean I should.”

“John Wayne as Genghis Khan in “The Conquerer” might be the worst casting in world history.

He doesn’t even try to hide his accent.

You keep expecting him to say “partner” every 15 seconds.”

Have you ever watched a movie and thought someone was totally wrong for a certain role?