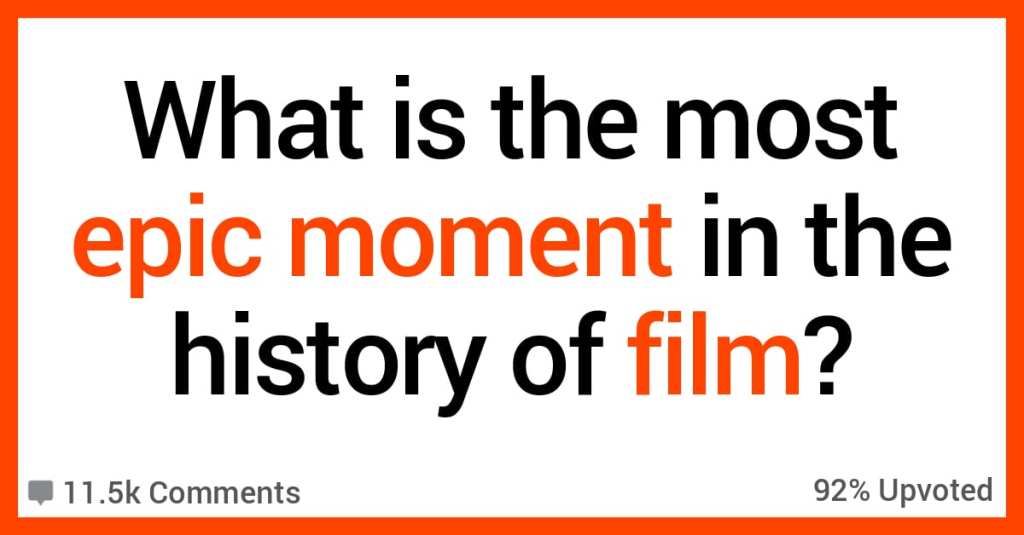 This is going to be a lot of fun!

When discussing films, the possibilities about what are the best moments in the history of cinema are pretty much endless, depending on who you’re talking to.

You could go in a million different directions: silent film, Japanese, French, gangsters, period pieces, 1960s, the list goes on and on!

What do you think is the most epic moment in the history of cinema?

Let’s see what AskReddit users had to say.

“The graveyard scene in The Good, the Bad, and the Ugly.

I’ve shown my kids a movie every Friday night since my oldest was 3 (11 now), and that’s our favorite. I can pull it up at any random time and everyone will stop what they are doing and silently watch it.

“Historically speaking, I think when everything is suddenly in color in “The Wizard of Oz,” after the first few scenes were in sepia.

That technology was revolutionary for the time.”

“The point where you’re introduced to the dinosaurs of Jurassic Park.

A turning point of CGI in movies along side the amazing score.

It means so much in context with the rest of the movie that just this small act of kindness can have that much of an impact on someone’s life.

5. I love the smell of napalm…

“The Flight of the Valkyries scene from Apocalypse Now.

“Back to the Future.

Marty successfully returning to 1985 just as Doc hooks up the lightning cable.

The Doc reveals he was wearing a bullet proof vest.

The DeLorean flies into the camera – the END.

The whole end of the movie is one air-punch moment after another.”

The way it is hyped that Andy might have committed suicide, it’s raining, its thunderous, he doesn’t come out the next day.

And then, we find out that he actually escaped.”

Ellen Ripley to the Queen Alien

Russell Crowe revealing himself as Maximus to Commodus in the arena was pretty legit.”

“Oskar Schindler, at the end of the film, realizing that he could’ve saved more Jews.

And Itzhak Stern and others telling him “He who saves a single life, saves the world entire.”

“The opening of Saving Private Ryan.

Probably the most effective part of that scene is at the very beginning — the camera holds on several faces aboard the landing craft, leading the audience to believe these would be the protagonists, the main cast members.

Then you see one of them get nailed right in the forehead by enemy fire as soon as the doors open. Now you don’t know who is going to live or die, except for maybe Tom Hanks.”

12. Indiana Jones to the rescue.

“The angels coming out of the Ark of the Covenant looking beautiful and sublime, but then turning into terrifying beings that burn the Nazis to death in Raiders of the Lost Ark.

Because the Nazis are evil.”

When Simba is making his way up Pride Rock after defeating Scar and the Hyenas.

Incredibly powerful moment, and I still get goosebumps every time I watch that scene.”

“The “What’s in the Box” scene from Seven.

I still have not rewatched that movie as the reveal was so epic I knew I could never feel that way about it again.”

“The car chase from The Blues Brothers.

It’s a hundred and six miles to Chicago, we got a full tank of gas, half a pack of cigarettes, it’s dark and we’re wearing sunglasses.”

“For me it’s the Millennium Falcon blasting out of the fireball of the second Death Star in Return of the Jedi.

I was 10 and I wanted to jump and run around the theater screaming in triumph right along with Lando and Nien Numb.”

A half burned cigarette hanging on his lip while chumming the water to entice the shark, then says “We’re gonna need a bigger boat” just after the shark momentarily pops his head from the water.”

Okay, film buffs, now we want to hear from you!

What are some of your favorite moments in cinema history?

Talk to us in the comments! Thanks!