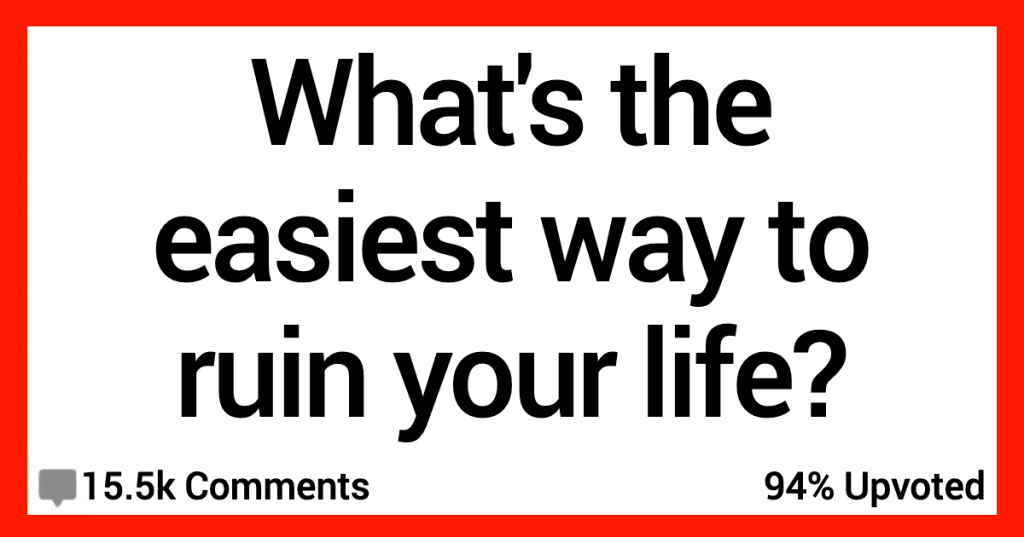 You never know what’s right around the corner in life, so it’s in your best interest to try to stay on the right side of things…if you know what I’m saying.

But still, we all know that anyone’s life can be ruined in an instant…let’s hear from AskReddit users about what they think is the easiest way to ruin your life.

Only takes losing control for a second to go from disagreement to felony… especially since the culture nowadays is to slam/ knock out someone.

One wrong move and its a major charge.”

So many people I know could have fairly decent lives with their income, but instead are buried in credit card debt and bank loans, many of them even have high incomes.

Just one example, family friend, university degree in chemistry, stable job but drives a 1994 cavalier in the worst conditions. Her brother d**d and she got enough money to put a huge downpayment into an apartment (70 to 80%) and pay some major debts. Kept saying it was too small and ended up getting more debt and the money vanished.

It is very easy to get crazy high limits on credit cards but too many people treat them like free money.”

Especially if you have kids together.”

I once ruined the s**t out of my life with crack and it affects my life to this day.

I’ve been clean for over 3 years now and I never intend to do it again.”

“Joining the wrong friend group at a young age.

It’s often one of the main causes for the other ones starting ( drugs, crime, teen pregnancy ect….) and can ruin entire morals.”

Not only does a lot of that outlook become habitual and in turn you begin treating yourself worse than you should, but also it literally just takes one dude having a bad day and then you’re 6ft under and he’s in jail.”

Everything else people are talking about here requires to to go out of your way to make a tempting yet risky choice.

Driving is hard to avoid, nobody can do it all the time without making a mistake once in a while. Make it at the wrong time and you’re d**d/crippled, for something you spent so much energy trying to avoid.”

I am unable to work anymore never again. I spent my entire life working with animals. Training horses and dogs. Showing and riding horses from two to thirty two eat breath lived.

Then never to work, ride, show or train. Working with abused or aggressive horses to help them. Gone in less than a second after, the first of many health issues, breaking cervical vertebra. It all went down from there.”

“Being rude to/dismissing people you love.

I was horrible to my little brother growing up. I didn’t actually harbour any h**e for him and he’s never done anything so horrible to me that warranted the verbal abuse I put him through. But we were going through some trauma and I subconsciously saw him as an outlet, because he was the only one younger than me in the family.

He’s currently in the hospital after a s**cide attempt. My childish brain didn’t register that I wasn’t the only one going through the trauma. He had nobody and still has severe trust issues. I would give everything to go back and be around for him. I would trade his pain with mine any day.

I regret every single thing that I did and I’m sure that I partly contributed to his depression and s**cidal tendencies. It’ll ruin me forever.”

“Fentanyl … still battling to get out off this addiction. It’s know to be one of the worse drugs going around right now.

I had such a happy life and once you start those pills it’s all fun and games to one day u realize nothing makes u happy unless your high and numb. Take it from me. Never do opioids.”

If you cannot (or will not) accept change or the possibility that you are incorrect, you are doomed. It’s not a sign of strength to zealously defend the indefensible, nor is it a sign of weakness to admit, that situations change or that you are capable of error.

Dogged dedication to a dogma with no adaptation to reality is the surest way to lose jobs, friends, and lovers.”

“Going to a for-profit art school. The school was great!

As someone who grew up poor and creative. Who didn’t have a stable home life and barely graduated high school the “normal” college rout was unattainable. However they had no problem heading an 18 year old with no Financial experience or knowledge a stack of loan papers and telling them “this college will change your life! You will make enough money in your new career to pay these back in a few years.”

The experience was pretty amazing I even met my now husband there. Fast forward three years post graduation and we are over HALF A MILLION DOLLARS in student loan debt. This is also in 2008 during one of the biggest recessions of our lifetime. I went to school for photojournalism.

I would not find a job that would pay enough for rent let alone a $2000 a month student loan bill. Forbearance and daily compound interest made that total increase about $30k a year. I’ve started an advocacy group for my alumni, the schools long been shut down. The 500 or so folks I’ve collected loan data on we are collectively in over $70million in debt that will follow us for a lifetime.

We can’t get mortgages, car loans and because they lied about accreditation we can go back to school for “real” degrees because none of the credits will transfer. We have several lawsuits in the works, fight for borrower defense to repayment. There has been some welcomed forgiveness to other bad actor schools like ITT and Corinthian. But these for-profits are still operating and lobbying. We are still on the hook for the debt.”

What do you think is the easiest way to ruin your life?

Talk to us in the comments and share your thoughts.