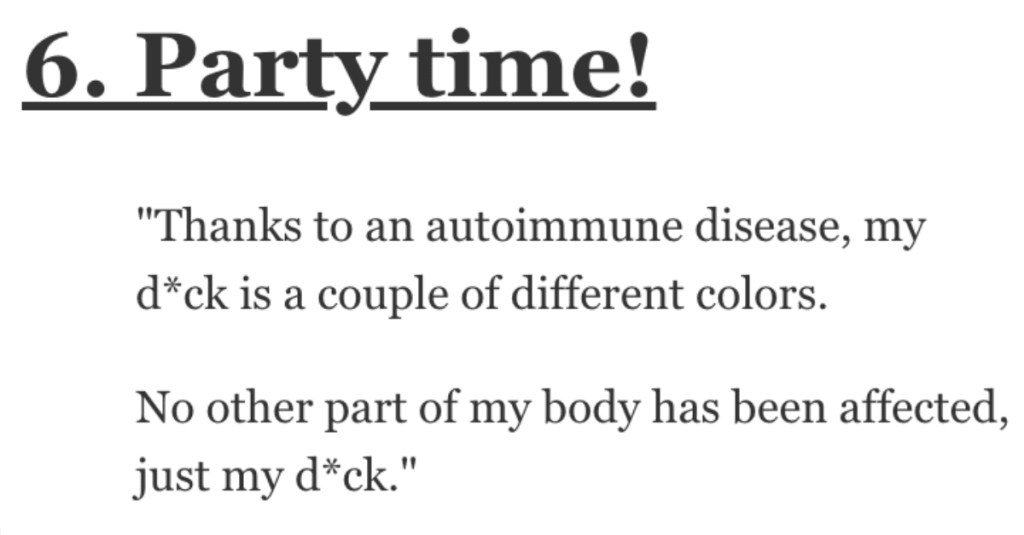 People Shared Crazy Facts About Themselves

What is a NSFW fact about you?

Come on! You can share! You’re in a safe place here!

Actually, you might want to use a pseudonym…just in case your mom or your spouse or your grandma reads the comments below and recognizes your name…and the kinky thing that you did…

AskReddit users were nice enough to share NSFW facts about themselves. Let’s see what they had to say.

“I’m several months out from the last time I had s*x. I had a checkup recently and had a blood pressure cuff strapped around my wrist.

When it squeezed my wrist, I immediately got pretty turned on.

“At the height of experiencing prolonged concussion symptoms, I mast*rbated and felt a jolt (like a shock of electricity) travel up my body to the part of my brain where a light fixture fell on my head.

“Smoking killed my libido so I killed two birds with one stone and quit for good by rubbing one out each time I got a craving.

Like multiple times a day, especially at work. 10/10 would recommend.”

“An ant bit my testicles once while I was having s*x at a hiking trail.

In case anyone is wondering, it was awful.”

“My dad was having s*x with a hospital nurse while my mom was giving birth to me.

That’s long been used for the many fights and reasons my mom hates men.”

“Thanks to an autoimmune disease, my “junk” is a couple of different colors.

No other part of my body has been affected, just the johnson.

“I got circumcised at 25 after slicing my foreskin and a vasectomy at 30.

My frank and beans hate me.”

“Slept with a very quiet guy, finished, thought he did shortly after and was like “that was totally better than the first time” and we cleaned up and passed out.

Found out the next morning that he absolutely had not finished.

Whoops. Total sweetheart though, just never thought that as a woman I would finish and my FWB wouldn’t.”

A few weeks go by, and when we would have s*x, I would c*m blood (well, very bloody c*m). This happened for a couple months, pretty gross. We wondered if my kidneys were failing, was my bladder messed and leaking, so many questions for a couple months. We broke up and after only a few days, i no longer had blood in my c*m.

Turns out, we were having “too rough” s*x too often, and the constant pounding was rupturing blood vessels in my p*nis, and we never rested long enough to let them fully heal. The blood pressure in my p*nis during s*x, coupled with the “abuse”, was filling my urethra with blood.

Moral of the story: f*ck too hard for too long and too often, you can break your d*ck.”

“I lost my virginity to the wife of my boss at the time. I

was 18 and working at McDonalds and I found out my ex GF from 8th grade (she was 2 years older than me) was married to my shift manager at the restaurant. They were fighting at the time and when we hooked up I had no idea she was married to my boss until after it happened.

Later found out he had cheated on her so it was one big game I got caught in. They later divorced. S*x was good at least. At that age I was just trying to lose my virginity before college but looking back it was probably a dumb move.”

“Well it was that one time I had s*x, condom a bit tight. Went in and felt something snap, not painful but strange. Then it felt wet, i pulled out and took off the condom to be greeted with blood and the girl got alot of blood on her face(somehow)

I nearly passed out. D*ck broken for 2 weeks. Won’t redo.”

I never looked at her s*xually, it honestly never crossed my mind until she was moving into an apartment and asked if I would help because I had a truck. We finished about 10:00pm, she said she was going to change and buy me dinner to thank me.

A couple of minutes later she called me into the bedroom, she was on the bed in her bra and panties and my dumb*ss apologized and stepped back out of the room. She came to the door, pulled me back in and she got to have the worst s*x of her life. It was bad but at least it was over quick. Somehow that turned into a weekly thing for six months until she started dating someone and I found my first girlfriend.

Well she got married to the guy she was dating about six months later and quit work. I worked in the store for another year before graduating high school and getting a better job while I was in college.

I’m sitting in my interview, he’s looking down my resume and goes “Hey, you used to work for my wife!” He offered me the job. My second day there she came in, found me, pulled me in the breakroom and swore me to secrecy. I worked there 17 years, I don’t think he ever knew.”

Are there some NSFW facts about you that you’d like to tell us?

Come on! You know you want to!