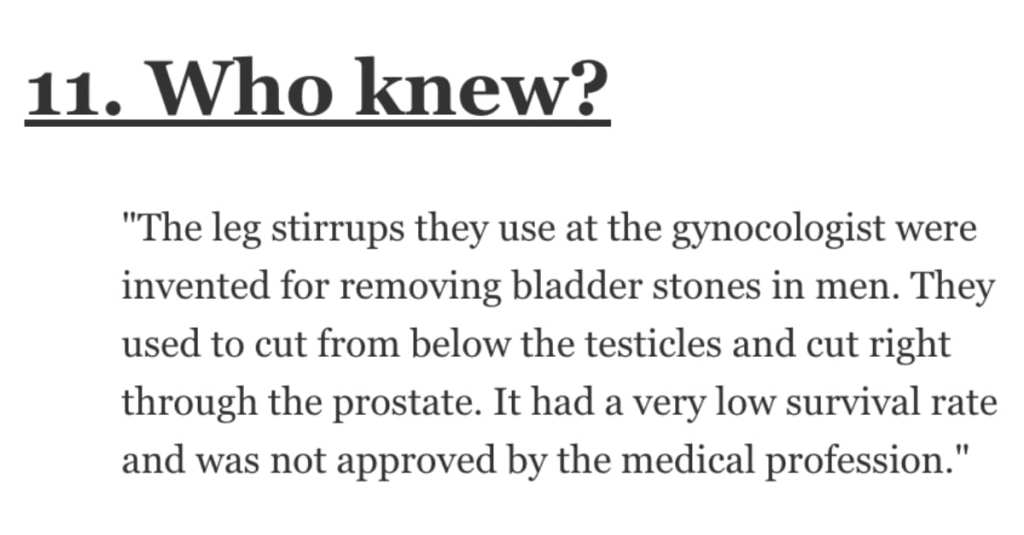 Have you ever noticed that sometimes, things that were designed for one s*x or one group of people end up getting used by other people than was originally intended?

It really does happen all the time…even if you’re not exactly paying attention to that phenomenon.

What’s something that was designed for the use of one s*x but is now predominantly used by the other?

“Marlboro “Reds” referenced the color of the filter, which was redish so that it wouldn’t show lipstick.

Kinda funny that reds are considered manly now, and women are more likely to smoke the lights which have white filters.”

“Victoria’s Secret was originally supposed to be a place for men to buy lingerie for their wives and not feel embarrassed.

But now it’s almost exclusively shopped at by women.”

Like young Johnny Depp in A Nightmare on Elm Street.

“High heels were originally made for butchers to wear (who were mostly men) so that they could keep their feet clean of any blood from slaughtering animals.”

It was supposed to be a car with a big trunk to you could fit all the groceries in it. There was even an ad or article stating that you can own a mustang that matches the color of your lipstick.

Makes sense why a lot of old mustangs are red.”

“Ugg boots were originally worn by male surfers, with their girlfriends stealing and wearing them like they would a leather jacket.”

7. Never heard this before.

A woman was supposed to hold the door for a man so he could check for any dangers in the building (the thought was mainly for married couples, but it could be done to a total stranger as well).

At some point it flipped and turned to just being a polite thing to do.”

William Lightfoot Schultz was inspired by his mother’s potpourri and as a result, the first Old Spice product in 1937 was a woman’s scent called Early American Old Spice.

The product was received well, and therefore followed with Old Spice for men in 1938.”

But now is famous for its use as a s*x toy/industrial strength vibr*tor.”

“Midol was marketed as non-gender-specific headache medication when it was first created.

Decades later they changed to marketing it specifically for treating menstrual cramps and bloating.”

“The leg stirrups they use at the gynecologist were invented for removing bladder stones in men.

They used to cut from below the testicles and cut right through the prostate. It had a very low survival rate and was not approved by the medical profession.

The original hippocratic oath had a section on “not cutting for stone” meaning they swore not to surgically remove the stones because of it. They later removed that section of the oath, otherwise a bunch of urologists would be out of a job.”

The magazine was founded in 1973 and was suppose to be intended and was marketed as such to women.

However, gay men became the most dominant consumer of the magazine.”

Back in the day all the men carried their coinage in a purse.

Although it’s making a comeback for modern dudes.”

“Yoga it was invented by men for men but for some reason it’s mostly women who gravitate towards it at least in the west.

Many men are too afraid to try it which is a shame because yoga is enjoyable I really enjoy it and it has a lot of benefits.”

“I remember reading somewhere that Kleenex was made for ladies to remove their makeup, but their husbands were blowing their noses in them.

And now we all blow our noses in them.”

Can you think of some other products that were designed for one s*x but are now mostly used by the other?