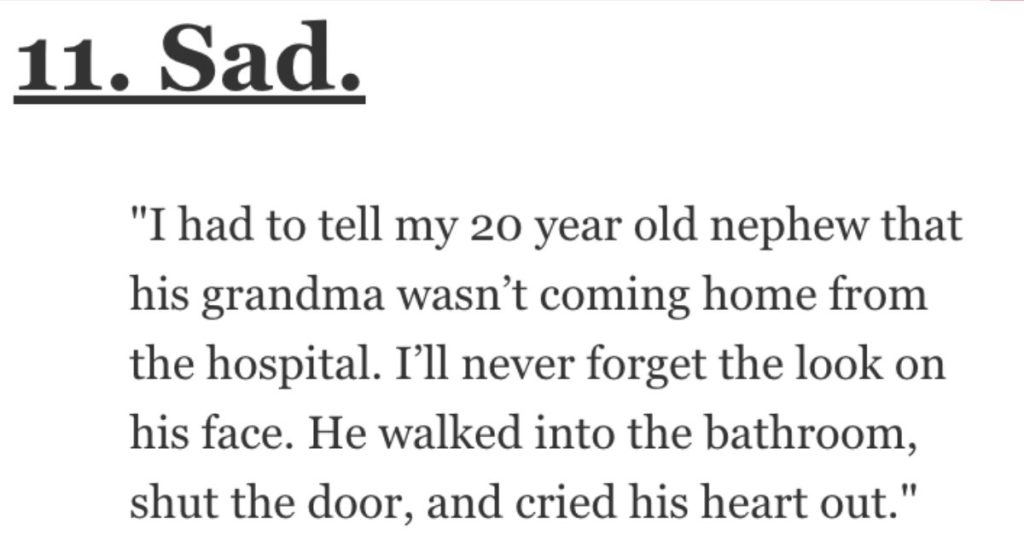 Delivering bad news to someone can really test a person.

And it can be really difficult to strike the right tone in these difficult moments when you know you’re about to ruin someone’s day and potentially alter their life forever.

What’s the hardest thing you’ve ever had to tell someone?

“Acting as an election officer.

Most of the candidates didn’t even bother turning up for the public count.

The one who did turn up was super keen.

Once I counted all the votes, I had to tell her that she was the loser. The only loser.

I could barely look at her as I announced the result.

I left quickly as she was still being consoled by her friends.”

“I think telling my best friend that the reason I was struggling so much was cause I had gotten r**ed.

I’m still dreading the day I’ll have to tell my family.”

“My sister d**d from drugs obtained from my mom, who was the one who found her d**d. She was arrested, so it fell on me to tell everyone.

I had to tell the rest of my siblings, my dad, my family, her best friends, everyone. Each phone call I made while my heart was broken broke my heart even further as I heard the pain and anguish of each of these people who loved my sister dearly.

Each heartbreak was like another cut in an already gaping wound.”

“I found my roommate hanging from a ceiling fan.

He didn’t have any family as he was from West Africa.

I had to call my landlord and explain.”

“I had to explain to a gentleman that his coworkers had been complaining to me about his body odor.

Telling a grown man that his peers think he stinks was not the highlight of my career.”

6. Calling all the friends.

“One of my best friends d**d in a car crash, at something like 2:30 in the morning. I found out the next morning.

I spent that day calling all of our mutual friends to tell them what had happened, reliving that moment and that grief over and over, because I was the first one to find out and someone had to do it.”

“The time I had to tell our neighbor that I had just witnessed his beautiful collie hit and k**led by a vehicle speeding through the neighborhood.

We both loved that dog dearly, so it was a real heartbreaking moment to deliver such sad news.”

“That I was the one who ratted out my best friend, who was having an affair with a married woman, to her husband. HE was cheating on his fiance at the time to. The married couple had kids, which so wasnt right.

So I told the husband, and showed him pictures I had taken from when my buddy would BRING the girl over to my parents house to hang with me when I was there.”

“Tomorrow, I’m telling a man whose wife is pregnant with his first child that his position at the company is being eliminated.

I haven’t slept well in weeks.”

“How about the hardest lie that I ever told someone?

I was 16 years old, and my mother was not quite on her d**th bed, but not quite not; actually, now that I think of it, I suppose she technically was on her “d**th bed”, since this hospital bed was the one upon which she would be dying less than two weeks later, but she was not imminently about to die at this moment that I was speaking with her. Still, she had lost half her body weight to the cancer by this point, and it was clearly just a matter of time.

She was somewhat lucid this time, which she hadn’t been for the past week. And she was asking me about the lifeguarding job that I was going to be starting in a few weeks; I told her about having just met the boss, and how nice the boss seemed, and how I had already gotten permission to take off for a few weeks once my mother got out of the hospital.

My mother loved the beaches of Florida, and we would go there for a two-week vacation every 2-3 years or so. It was her favorite place in the world. And so I told my mother all about the trip that we would take that summer, once she was feeling better and back on her feet; there was one motel in particular on Miami Beach that she especially liked, and I promised her that that’s where we would be going.

And hey, maybe we’d even swing by Disney World too while we were in Florida, and enjoy the Haunted Mansion together as well as the roller coasters.

She smiled. She happily looked forward to this trip we’d be taking.

Then I left the room, went into the stairwell, and cried hysterically. Over thirty years have passed, and I still can’t tell this story without crying.”

“I had to tell my 20 year old nephew that his grandma wasn’t coming home from the hospital.

I’ll never forget the look on his face.

He walked into the bathroom, shut the door, and cried his heart out.”

“I found my older brother d**d in his apartment then I had to call and tell mom.

The anguish and pain in her voice when she screamed “NO”” still haunts me.”

“My family posted the d**th of my grandpa on facebook around 3am and I took off to my moms house to let her know in person before she saw it ONLINE… hardest thing to do so far.

She was so close to him and it really hit her hard.”

“Calling my dad’s best friend and telling him that my dad d**d.

They grew up together, they knew each other their entire lives, over six decades.

Heard him cry over the phone. THAT hit hard.”

“When I was 14 I had to call my mother and tell her my eldest brother committed s**cide.

My dad could not call her because they were divorced and she had blocked him.”

“Telling my parents I was a her**n addict. I was in an abusive relationship and hard into drugs and worried I would die. I needed help.

My dad sat with me through the entire withdrawal and I’ll be 10 years clean this November. I tell him all the time that he saved my life.”

“I had to (separately) tell my two young boys, my sister in law, and mother in law, that my wife (their mother/sister/daughter) had d**d.

It’s been over three years and thinking about it is still devastating.”

Had to tell a family on Christmas Eve one year that their baby was d**d.”

“Calling my mom to tell her my father d**d of cancer.

He had Alzheimers and I was the one who was staying with him that night (he had to be watched 24/7 or he would escape the hospital).”

“Had to tell my friend’s ex-GF why he had a closed casket funeral.

He stepped in front of an 18 wheeler on the highway.”

“I had to tell my grandfather that he wasn’t going to come home from the hospital.”

““The Secretary of the Army regrets to inform you…” to a Vietnam vet whose son had just d**d in Afghanistan.

Then having to give the same speech to the kid’s mother who was chain s**king and bawling her eyes out because the dad called to tell her before I got there.”

Growing up my parents fostered. Just before I moved out we looked after 2 kids under 5. I was reading him his bedtime story and out of nowhere he just said ‘I don’t have a mummy. Can you be my mum?’ in this teary voice.

Both siblings have a really happy home now but I went to bed teary eyed that night.”

The last time they saw each other was not a good visit and I think our dad really regretted treating him badly, but now reconciliation was no longer possible.”

“Had to tell my 3 year old son that “mommy just forgot. She still loves you,” after the rotten b**ch showed up and only picked up my 5 year old daughter ON HIS 3RD BIRTHDAY which was also her “every other weekend” (I have primary custody)…. they split and she took my daughter to a f**king fair. Rides cotton candy the works.

My family got together on 3 hours notice to throw him an impromptu bday party to distract him. Thank God for them.”

“Had to tell my mom my brother had been k**led in a one-car automobile accident.

Had to talk her gently through it several times over about a week, because she just couldn’t process losing her son.”

” Working in management at a nursing home.

I had to call the family member of a resident with dementia and let her know that the resident’s caregiver was witnessed slapping the resident across the face. Apparently the resident was resisting care and that was how the caregiver decided to respond.

I don’t know if it made it harder or easier that the daughter said it was ok and she didn’t blame the caregiver because she knew how difficult the resident could be.

It was hard, heartbreaking work but I gave it my all until I realized it was a losing battle and upper management would never make the changes they needed to to be able to provide the care people deserved.”

In the comments, tell us about the hardest thing you ever had to tell someone.

We look forward to your responses.