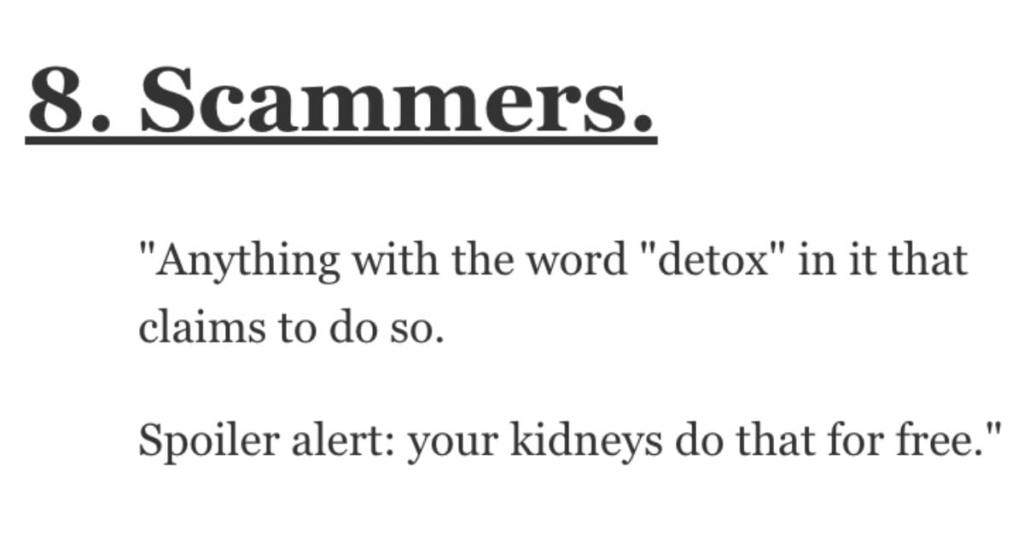 People Talk About the Products That Prey on Stupid People

I always feel terrible when I hear about someone who has been ripped off or fallen for a scam that ended up costing them a ton of money.

But, as you know, there are scammers out there everywhere and they’re always trying to get as much cash as they can off of unsuspecting people.

So what products tend to prey on folks who maybe aren’t super aware?

“I tried to sell window, door, and bathroom luxury remodels to people lower income areas because my boss said they were more desperate and will pay a little extra to get any sort of help.

I left that job real fast after she told me that I was being too nice and I should use my ability to be empathetic to lure people in then aggressively pressure them into buying.

It’s Evil on another level.

There’s a guy that sells magic water, has been conning people for decades.”

There’s no easy way to a good body I’m afraid.”

“Snake Oil products, the miracle “DOCTORS WON’T TELL YOU ABOUT X PLANT EXTRACT/OIL/WATER” and then it does absolutely nothing but make you feel sad you’ve paid an exorbitant price for it.

An example I just ran across recent is Moringa Oil, which if you read the list of things it can do you’d think you’ll regrow your limbs with a drop of it.”

It preys on vunerable, easily influenced people. Which is worse IMO because those people are often teenagers.

I know some smart, skillful people who were broke because they started smoking at a young age and were heavily addicted to smoking.”

“Payday loans. What a bunch of vultures.

I work in consumer finance.

I can confirm the rest of the industry views them as bandits.”

“Anything with the word “detox” in it that claims to do so.

Spoiler alert: your kidneys do that for free.”

I get they’re against big pharma and yeah sure, a lot of conspiracy theories might be true, but if healing stones did work, do those people honestly not think they would have monetized the sh*t out of them themselves?”

I get it, you want something unique and memorable, but for the love of God, don’t drop more than you can afford on it! Unless you sh*t money, don’t buy 10, 50, 100k rings! They’re overpriced, and you can prove that yourself by trying to re-sell them.

Now if you inherited it from your grandparents, that’s another story.

In a similar vein, weddings. It is completely possible to have a great wedding for a low price.

Don’t go into debt over it!”

But really anything these days. There have been decades of research into how to manipulate people for profit (advertising, how places are set up etc) and I really hate the attitude of “buyer beware” or “they should have known”.

If I con an old lady out of her savings its a crime. If a company sells her “funeral insurance” it is business.”

Actors were compensated for their appearance in this ad. We are not financial experts and nothing in this ad should be taken as legitimate financial advice. If you spend $19.95 on this rubbish, may God have mercy on your soul.

**Money back guarantee only good in American Samoa and the Virgin Islands.”

“Herbalife. I’m from a poor, mostly Latino community in California. So many people here fall for it. Unfortunately, one of those people includes my father.

My family has always lived pretty much paycheck to paycheck, so I’m not surprised that someone convinced my father that this would make him money. He’s been saying for years that he would make this work. I don’t know if it actually leaves him with any extra income, but he certainly hasn’t risen to the middle class or anything of the sort.

Worst thing is, he’s not even trying to con others into buying the products – he wholeheartedly believes in their effectiveness. I hate that their business model preys not only on the stupid, but on the desperate and poor.

I honestly wish I could convince my father to spend his money and energy elsewhere, but I think he needs to come to that realization himself. I don’t know if he ever will.”

What products do you think really prey on people who aren’t too bright.

Talk to us in the comments and tell us what you think. Thanks!