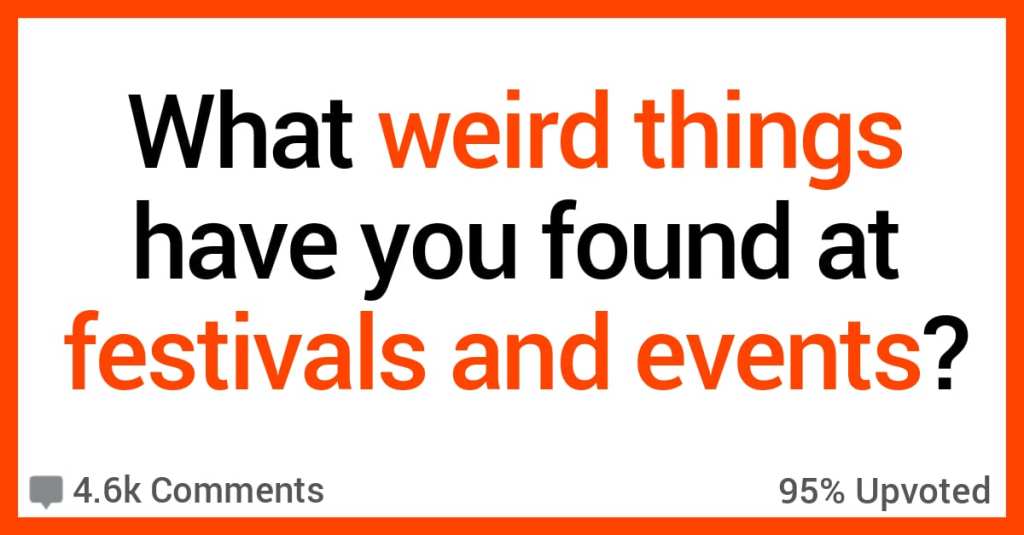 I’m not really one for big music festivals at this point in my life, but when I was a teenager I loved going to the Warped Tour every summer.

All the biggest punk bands playing on a few stages in the miserable heat for ten hours? Count me in!

And the people watching was just great, as you can probably imagine.

Some of these responses give me a good idea of what they saw.

AskReddit users talked about the unusual things they’ve found at festivals and events. Let’s get weird!

“I used to walk around the raves and look on the ground with a flashlight, found a multitude of great things.

In one night I would find a baggies ecstacy pills, cocaine + assorted drugs, 30+ lighters, hundreds of dollars in cash, jewelry and so many articles of clothing.

That was the average each weekend.”

“Worked as a carny a few seasons.

The zipper operator would straight up guard his ride’s area to loot it in the morning after it’s use. Many cell phones, wallets, cash and tons of change.

He knew how to operate it so well that he could spin certain tubs (full of riders) excessively if they looked drunk or like they might be unwilling donors. He made more in ground scores than he made operating and moving the ride.”

“Having had all our sh*t stolen (including train tickets home) when I went one year, I was stranded at the campsite with my mates after everyone had left.

After 2 hours we managed to find bus tickets home, an LV bag, 200 cans of beer (and two buggies to carry them on), around twenty power banks, an iPhone, loads of tents full of excrement, about ten unknown pills.

A couple of bongs, loads of pairs of crutches, about an ounce of weed… Came across a YURT style tent worth about £1k and disassembled that to take home too.

W came across other groups of people raiding the abandoned tents and all congregated and piled every single inflatable mattress we could find in a giant pile and jumped onto it from up a tree.”

4. You probably need this.

“I’m an event manager for corporate conferences and trade shows.

Best thing I’ve seen left behind was from a large well known medical company. They left an unopened / brand new defibrillator that you’d see in an emergency room. When I called and told them they had left it behind they said to keep it.

So naturally I googled the item – retail cost $5K.”

“I can’t disclose much due to the NDA I signed but I cleaned for an annual Christmas party thrown by a multi billionaire type guy a couple years in a row.

I’ve found little baggies of pills and powders, jewelry of all kinds and n*pple pasties and panties in all sizes. I’ve seen a half naked drunk chick try diving into a pool and splitting her head open and ODs of all kinds.

Man I miss cleaning for those parties. I got to attend the wild parties AND get paid for it!”

Crew had roasted a whole pig during set up and someone off their head decided to take the left over head for a walk around site Monday morning of the festival.

It was actually a bit messed up, saw a few freaked out people afterwards and had to convince them it wasn’t real so they would calm down. It was dumped in a hedge somewhere until crew found it and disposed of it properly.”

Dead body under a mountain of beer cans.”

“I was cleaning after a festival once and a guy next to me found a gallon ziplock bag half filled with weed.

Once he look at it further he realized there was an iPhone and a roll of money in the bag as well.

Needless to say, he was happy.”

“I have no idea how people are getting it on in the middle of the dance floor, but my god I have become desensitized to used condoms at this point.

Some genres are worse than others, but I just want to know how?

Like you are literally surrounded by people, you have security watching the crowd like a hawk, and some how you manage to get it on. What?”

Keys and blowup dolls are some of the most common things left behind.”

“I worked Talladega clean up.

For those that don’t know, it’s a NASCAR track in Alabama. The most savage rednecks go here to be absolutely crazy. S*x, drugs, and TONS of alcohol. Well I’ve found condoms, full bottles of liquor, bunch of weed, syringes, a drone, a pistol buried in mud, and a destroyed cell phone.

That was one time. And I was one of about 50 workers.”

“Best time to go is Saturday and Sunday night. Just take a walk in high traffic areas with your head down. You’ll find lots of drugs and cash.

The craziest thing I’ve ever came across though was just a huge coincidence. I was at a festival about 750km from my home town. It was Sunday midnight and I was just dancing through the darkness on half an Oz of mushrooms I noticed a flash of white out of the corner of my eye near the forests edge. Turns out it was someone’s provincial ID card.

Not just anyone’s. It belonged to a girl from my hometown I haven’t seen in years. Given her lifestyle its not strange she lost her ID while f*cked up at a festival.

It was just a crazy coincidence that the only ID I’ve ever found in years of festival going, far from home, at a festival with 9000 people, happened to be someone I knew pretty well.”

Have you ever found something weird at a festival or an event?

If so, share your stories with us in the comments. Thanks a lot!