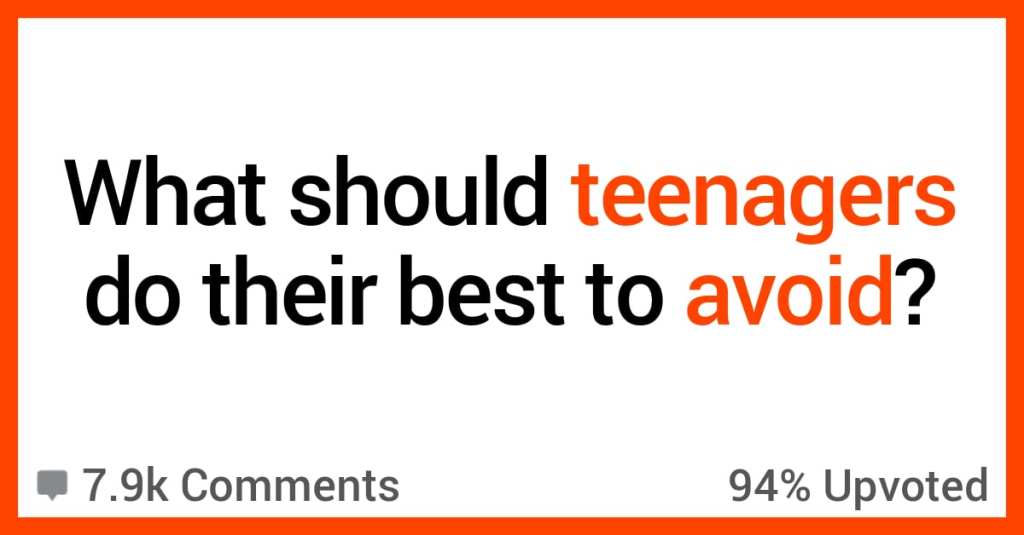 People Talk About What They Think All Teenagers Should Definitely Avoid

If there’s one thing I remember about being a teenager, it’s that I didn’t really listen to the adults in my life who tried to give me good advice.

I guess that’s what all teenagers, do, right?

But I guess those of us that have been there still need to try to do our best and give these young folks advice and just hope that they listen to us…because we’ve been there and we’ve done that.

AskReddit users talked about what they think all teenagers should avoid. Let’s take a look.

“Don’t practice unsafe s*x. Condoms and pills are cheaper than having to raise an unplanned child.

Tobacco, drugs, and alcohol. No, they don’t make you cool.

They are very addictive, and you can’t easily shake off the habit.”

“If you haven’t been financially educated, credit cards.

It’s far too easy to get into debt with them and can really destroy your future for years.”

“Emotions were discouraged in my household. Well, positive emotions were fine. But if I didn’t look happy my parents would get angry and yell at me.

Now I’m trying to fix it by teaching myself what my parents didn’t. But to be fair to them they were raised like that too and didn’t know any different.

So to anyone who’s going to have children or already has them, one of the biggest favors you can do your child is work through your own sh*t. Because it will follow them and you’ll realize it way too late.”

Teenagers often think that they’re cool for hooking up with dudes who are far older than them, but the people who hook up with teenagers as older adults are not the cream of the crop.

Everyone wants to think they’re mature enough to date an older person, but most of the time there’s going to be a power imbalance.”

“When you are little, it’s sweets which rot the teeth.

As we get older, the issue is different and you should be more concerned with bacteria on the gum line- cavities are still a thing, but so is inflamed, retracting gums.

Brushing before bed helps a lot. A lot. And flossing is also good. Take care of your gums.”

Seriously, if your friends only ever get you in trouble and treat you like a burden, they’re not your friends.

By all means the prospect of leaving a social group to find another social group can be pretty scary. Facing that fear is better than being around sh*tty people.”

7. Go easy on those things.

“I’m honestly surprised I dont see this mentioned yet, but energy drinks (at least not in moderation).

Especially the newer ones like Bang, that have a ton of caffeine. I was drinking upwards of 3-4 Monsters a day as a teenager and wondered why I had “insomnia”.

I’m pretty sure I dont have a heart problem, but even 1 cup of coffee makes my chest hurt a little now. Take care of your bodies, kids.”

“Aside from pregnancies and drugs, I’d say going into debt for stuff that’s not actually necessary to survive, like buying the newest phone, or car, or whatever.

Where I live it’s still pretty common that younger people take up loans or enter subscriptions/contracts (think phone, internet etc) to have the newest gadgets, only to realize they cannot afford after a while, then the late fees pile up etc, it can end badly.”

One of my school friends did this years ago. This doesn’t make you cool, he now has a criminal record, prevented him from getting jobs when he was 16.”

“Not picking up a creative and/or athletic skill.

One of the problems people face today is obsolesence: the skills you learned in your youth become useless because something new over the horizon will replace it. Kids today look up to influencers and are amazing at making tiktoks, but honestly, that’s not gonna last.

An athletic skill will give you a strong and healthy body for your entire life. A sport develops a competitive and goal orientated mindset that translates easily into any job. A creative skill develops sensibilities that will shape your worldview. Displaying your creativity gives you the opportunity to express and share yourself.

Not to mention that both develop responsability, time management, and a love of practicing to perfect those skills. In the long run, any of these skills is worth more than any amount of likes.”

“Letting other people make your decisions.

I let religion, family, friends society etc. dictate my behavior. It’s comfortable because you tell yourself they know what they’re talking about… They don’t.

Sure, you’ll make bad choices, but at least they’ll be yours and you can learn from them. There’s a special kind of regret you feel when the bad choices you make are a result of other people living your life.

Trust yourself enough you fail. Think, make a choice, and actually live.”

Seriously. You get a decent set of earplugs and in 10 minutes you don’t even realize you’re wearing them and your ears are better for it in the long run.”

“A hard set beliefs of any type.

People change as they get older and their beliefs change with more information and experience.

Brains in humans do not fully develop until about 25.”

In the comments, please share some good life advice that you think teens should hear.