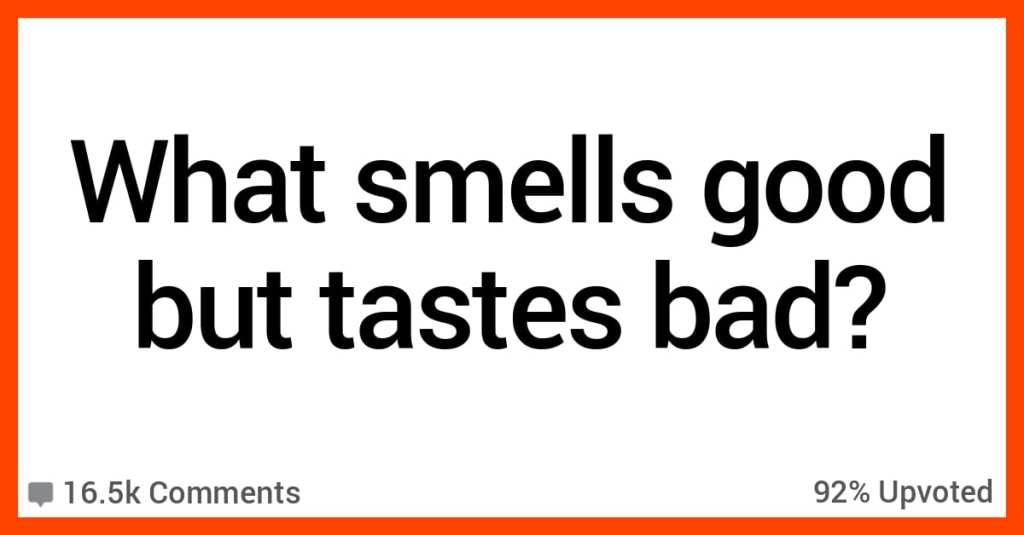 People Talk About What They Think Smells Good but Tastes Bad

Well, this question should make people come out of the woodwork with some interesting answers.

Because we’re all pretty passionate about what we eat and what we think smells good. For instance, I love the smell of freshly-poured tar on the street, but I wouldn’t recommend eating it. The last time I did it…well, never mind.

Let’s see what AskReddit users had to say about what smells good but tastes bad.

“Those scented markers we had as kids.

The black sharpie was my favorite.”

When I was a kid and my parents were outside, I decided to shoot some of that delicious smelling extract straight.

Worst decision I made that day.”

I put some in my mouth once when I was like 5 I regret it every single day.”

Sometimes you spray too much and end up tasting it.”

5-year-old me learned that one the hard way.”

When I was a kid I was so convinced that it would taste good. My mom even tried to warn me, but it’s chocolate right?

My younger self was very disappointed.”

“There are some teas that smell amazing but taste like horrible bitter garbage.

Most fruit infusions are like this. Disappointment in a mug.”

8. Wash your mouth out with it!

I was a precocious child. I had my mouth washed out with soap several times Dawn dish soap was the worst.

Irish Spring was not as bad but it was all terrible.”

The oats have this absolutely delicious smell, like a perfect blend of spices and wholesome, filling veggies.

But then you take one bite and it tastes like dirt.”

I would be so much happier if the ocean had sugar water than salt water.”

As a little kid, I always wanted to consume Play-doh for some reason.”

No matter what kind of lipstick you pick it not only smells delicious but also looks delicious.

To this day I sometimes fulfill my temptation and I hate myself a bit more each time.”

“I used to work at lush and the number of people who thought the soap was candy and would eat it was too many. There was one guy who came in and the conversation went something like this.

Him: what is this?

Him: takes a bite of the block of soap

Employee: it is soap

Him: this is a terrible business, you shouldn’t have these things displayed like food, people are going to get confused!

People would also eat the testers. As in, the things that everyone would put their hands all over. The fact that we’re only just NOW having a plague is truly a wonder.”

“The KFC near me.

Smells amazing. But every time I try them…. I either get the sh*ts or food poisoning… So I dont try them for about a year-ish.

Then my resolve weakens and the smell draws me back in.. and I think…Maybe this time will be different…but nope.”

What do you think smells good but tastes bad?