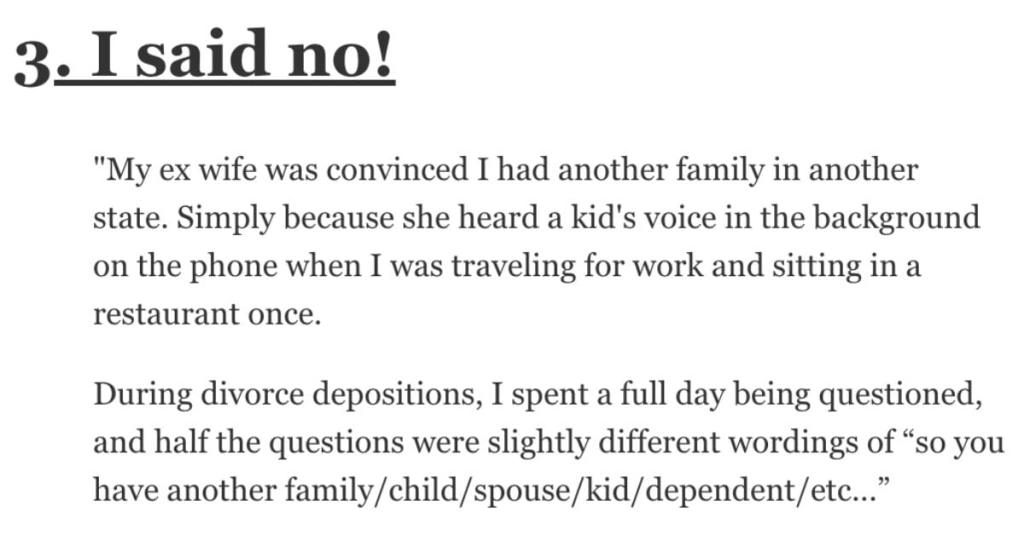 You know what they say about assuming things: “you’ll make an *ss out of U and ME.

And it’s pretty true, in case you haven’t figured it out for yourself yet.

You never really know where someone’s been, what they’ve done in the past, and what their mindset is, so it’s best to just not ever assume anything about anyone.

That way, you’ll be a lot more open-minded when you meet people and that’s always a good thing!

Here’s what AskReddit users had to say about people who wrongly assumed things about them. Let’s see what they had to say.

“I was at a dinner party and people kept offering me drinks that I continued to decline.

Eventually one woman’s eyes lit up as she looked between me and my husband and then she asked, “oh my gosh, are you pregnant?” Everyone around us got quiet and I laughed and said “no, I have epilepsy.”

I was handed no more glasses of wine after that!”

“Had a friend I was crushing on that I felt liked me too. We were talking online one day and he had to go to work, he says “I’ll bbl and then get to spend more time with my favorite Asian.”

For as long as I knew him he thought I was Asian. Once he found out I wasn’t he ghosted me.”

“My ex wife was convinced I had another family in another state. Simply because she heard a kid’s voice in the background on the phone when I was traveling for work and sitting in a restaurant once.

During divorce depositions, I spent a full day being questioned, and half the questions were slightly different wordings of “so you have another family/child/spouse/kid/dependent/etc…”

“Around the holidays my students often wish me Happy Hanukah. The exchange usually follows this pattern:

Me: Neither am I . . . but thanks for the sentiment. Happy Holidays!

I’m a college teacher in a Brooklyn school, so a lot of my students simply assume I’m Jewish.”

“That I am clever because I like to read and wear glasses.

Then they see my grades and are really suprised…”

‘m 4’11” and have resting nice face. People either baby me or are awful to me because they think I’m a teenager. People constantly ask me what grade i’m going into.

I get into places for free sometimes or at kids price, especially if i’m with my family and my nieces and nephews are present. It’s a blessing and a curse. but people assume a lot about me. I like it, I’m often underestimated.”

“I live in a very Hispanic/Latino area and one woman heard me speak English and yelled at me for not speaking Spanish, calling me a traitor to my ancestors and bringing shame to my past family history in Mexico and Puerto Rico.

Imagine her surprise when I told her I was Arab and Middle-Eastern. Still felt guilty for not knowing Spanish for some reason.”

“My teacher asked my mom if I was taking drugs because my eyes were “bright” or something.

I was not and my mom knew it so nothing bad happened but a good laugh.”

“People assumed is highschool i was eating nothing but junk because i was rapidly gaining weight while my twin wasn’t.

In truth i was starving myself because i couldn’t figure out why i was gaining weight. It wasn’t untill my 20s i found out i had a tumor on my thyroid and that’s what caused the weight gain.”

“I have a high voice as well as a high vocal range, but people always assume I’m a woman on the phone.

It’s hilarious when the scam callers say “‘ma’am you have a virus on your computer” and I lower my voice an octave and proceed to scream monkey noises for a minute and a half until they hang up.”

“My MIL assumed I couldn’t cook, even though I’ve been cooking my entire life and enjoy doing it.

She always insisted that we go out to eat when they visited, to the extent that she would ruin our family plans because she was that adamant about not eating at our house.

Until one time, after about 3 years of being together, my husband refused to eat out and insisted that I cook. After eating she turned to my husband in surprise and said, “wow! This is really good! I didn’t know she could cook like this”

My husband liked her dead in the eyes and said, “that’s because you never gave her a chance and she’s a better cook than you”.”

“A psychiatrist from the Emergencies assumed I had a lot of s*x because I told her that a few months before, things happened with one of my roomates when we were both drunk, but I didn’t know how far things went.

I went over the edge because of the silent treatment he gave me afterwards, underlying issues I had about s*xuality and a mild fear of unwanted pregnancy. I also told her that I occasionnaly partook in binge drinking at the time because it was true, which might have added to her bad opinion of me.

She called my mom (she was my emergency contact), told her everything and basically slut-shamed me on the phone, which I assume is super unprofessional, if not downright illegal (I thought what you said to a psychiatrist was private).

I was possibly a 23 years old virgin at the time (since I still don’t know what happened that night, at least the pregnancy scare was unfounded).”

“I started at a new high school my junior year. For starters, I looked like a hippy. I have very long wavy hair and dressed pretty boyish.

Everyone, including the school administrators/nuns, assumed I was a drug dealer of sorts. I had never even seen weed or any drug at that point. I got “randomly” chosen for our schools monthly drug tests several months in a row and periodically there after.

People constantly asked me for hookups or where to find hookups. On the plus side, the other hippy types gravitated and became some lifelong friends of mine, though their proximity to me was still suspicious at the time.”

“This happened to me last night!

My girlfriend and I are in a different part of the state visiting her parents. She gets 7 missed calls and voicemail from the state police.

A wanted man fitting my description is staying in a hotel of the same type, in our SAME ROOM NUMBER.

My girlfriend registered the room under her name, so the cops assumed she was shacked up with this guy and we were trying to give them the slip.

We go back to the hotel that night, she goes upstairs while I have a cigarette out front.

I see the woman at the front desk walk out into the lobby, recognize me, stop dead and immediately turn around. I text my girlfriend, “they totally think I’m that guy.”

To be fair, I have a big beard and I’m wearing black head-to-toe, including a black leather jacket–I stand out in this part of the state.

Sure enough, not 5 minutes later there’s a knock on the hotel room door. I knew it was a state trooper before I opened the door.

When I tell him I live in a different part of the state and prove it by reciting the address on the ID, he stops writing, looks at me and says, “so you’re just visiting for a few days, happen to be staying in this type of hotel, in this room, and fit this guy’s exact description?”

He gives me back my ID, and on his way down the hall, turns and looks back at me and says, “promise you’re not him?”

Apparently, they really thought they had their man.”

We want you to tell us stories about when people assumed totally false things about YOU.