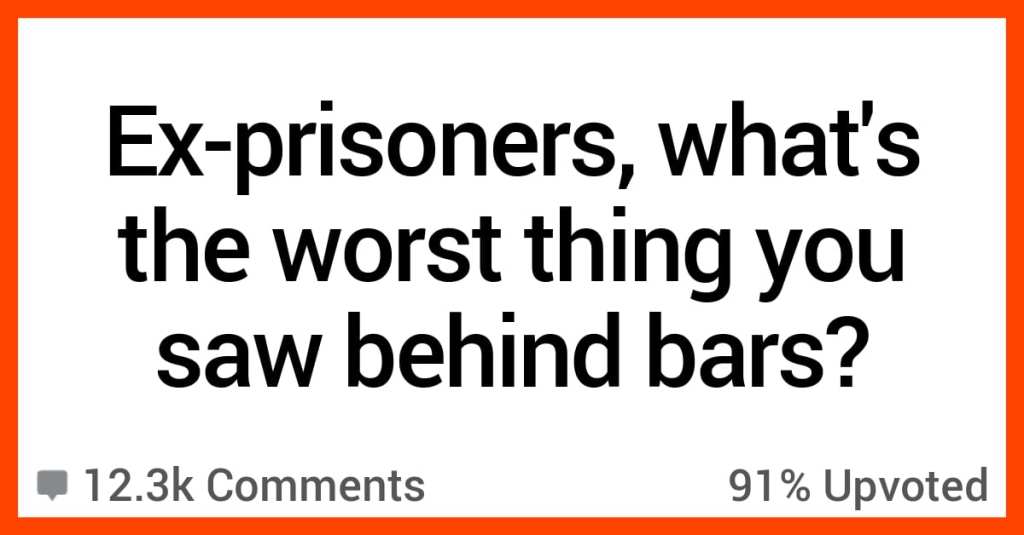 But I think that unless you’ve actually been behind bars, none of really have a clue.

Well, it’s time to find out what goes on inside those walls, because AskReddit users that have done time all talked about the worst thing they witnessed while they did time.

Let’s take a look at what they had to say.

“Saw someone break a small branch off a tree in the yard, dry it out in the sun, sharpen it down to a point on the concrete and then stab a guy in the back with it 4 times, he had to be airlifted to hospital because it punctured his lung.”

“I saw a guy get in a fight with his cousin over a 50 cent bowl… this escalated more and more until they starting fighting.

We all kinda watched out the corner of our eyes bc it was in the cell while the doors were open. Well the guy that was p*ssed about the bowl grabbed the dude by the hair and bite a huge hunk of his cousin’s eyebrow off… like about half of it.

If that wasn’t bad enough me and my cell mate moved into the cell bc it was further away from the TV. So we are cleaning up the cell and my cell mate goes ” holy f*ck look at this!” he lifts up what I thought was a dead hairy bug… nope, furry *ss eyebrow and skin.

Doesn’t haunt me, just crazy to think a guy lost half an eyebrow over a f*cking 50 cent bowl”

“We had an offender with a colostomy bag.

Every time he would shower, the most terrible smell would fill the unit. We asked him multiple times to not burp his colostomy bag in the shower but he swore he wasn’t.

Eventually, after developing an infection, his doctor found out he was charging other inmates to have s*x with his colostomy hole.”

“The term “getting the sh*t beat out of you” is real. You get beat so fast and hard the adrenaline kicks in and you sh*t yourself.

It’s like some primal defense mechanism. Saw many guys crawl away because if they walked away all the sh*t would dirty the pod which would make everyone more angry.”

5. Turning on each other.

“I remember people kinda turned on each other out of boredom.

I mean, you made friends and all, but you had it hanging over you that you were a bad guy, and some people took to being *ssholes and provoked others seemingly out of boredom.

It was an unpleasant situation to be on the other side, because you wanted to stay out of trouble too, but at the same time had to stand up for yourself. Maybe not the absolute worst I saw, but something I remember.”

“Kettle-ing was horrible and i saw it at least 10 times. People would lose an argument, fight or just get embarrassed by someone and go back to their cell, fill a kettle up with water mixed with sugar, boil it and then throw it in the perpetrator’s face.

The sugar made the water like napalm and it would stick to them. I saw 4 people hang themselves, one person slit his wrists and fall through the cell door when it opened in a massive pool of blood. Many, many people cut themselves with razors as a way to get things they want. And one person in the segregation block, smear sh*t all over his cell then cut himself all over and smear the sh*t into his cuts. Also people throwing buckets full of p*ss and sh*t over others.

I saw a pool ball thrown at a guys face and break his nose and jaw. I was a prison “buddy” which is a information giver/counsellor. This was all in 3 years and im grateful everyday i wake up that I’m not still in there”

“Saw a dude get his face turned to hamburger over a card game. Dude lost so he sucker punches the guy scross from him a minute later, gets in top of him, and probably get about 10 hits in by the time the CO broke it up.

Blood everywhere I was like holy f*ck….it was like my first month there and it made me kinda not wana leave the cell.

My bunkie was a blood and jacked he’s like dude nobody will f*ck with you I’m like ok I hope not…I’m pretty sure he smashed his eye socket in.”

“Not prison, but county jail.

I was doing 90 days and a woman who was very pregnant went into labor. They refused to take her to the hospital until her contractions were 2 mins apart. When they finally did, they shackled her to the bed.

They refused to unlock the shackles even when the baby was in danger. She lost the baby and almost bled out. She was in jail for traffic tickets…”

“I was in a prison that was split. One side was a level 4 facility (just under max) and the other was for mentally ill inmates.

One day they decided to move some of their more stable mentally ill patients to our side, the level 4 side. There was this really huge dude who, as soon as he got to our prison, just started screaming that he wanted to go back.

He turned and found the person closest to him (I was down the hallway from him) and he proceeds to beat the hell out of this random dude. Dude went into a coma and died two days later. It was horrifying to watch this blatant display of random violence that ended with someone dead. I won’t ever forget it.”

“A guy get his face beat in by a dude with a cast on his arm because guy took dude’s ketchup pack off his plate on hot dog day.”

“Saw a lot of bad things, like the usual fights, couple people dying and such.

One of the most f*cked up things I saw was what the guards did to this one inmate. I was in maximum security, and then there is a supermax segment of that which is all tiny single cells to hold the murderers, high profile cases, and complete nut jobs that are too dangerous for general population.

So I was a trustee doing my rounds handing out lunch to the single cells. This one guy demands an extra sandwich from me…I tell him it’s not happening bc I don’t have extra, and he starts throwing stuff including who knows what liquid on me. Well the guard sees this, and I was cool with them bc I never acted up or anything.

Then he gets on his radio, and calls for their “special response team”. Maybe 1-2 minutes max, 12 dudes in full riot gear coming walked down the hall marching and banging their clubs on their shields like something out of a movie. They let me stand there for some reason, all 12 of them somehow fit into the 6×10 cell, and just beat the living sh*t out of this guy. The guard tells me he will handle the rest of handing out lunch.

I get back to my cell near the indoor guard office, and about 5 minutes later they bring this battered dude down. They have what’s called a restraining chair, which straps your ankles, legs, waist, wrists, head and neck all down.

The guy gets promptly put into it, and then rolled outside to the yard about 50 feet away. Promptly gets maced. It was 36 degrees that night, but they apparently have a rule that they can keep you out there as long as it doesn’t hit freezing. They left this guy out there for a solid 12 hours with no food/water and barely any clothes.

I saw him again 4-5 days later after he got out of the hospital/medical, one eye swollen shut, the other barely opened, and beaten beyond recognition. He called me over to his cell and apologized. Appreciate the guards looking out for me, but I felt a bit bad for what they did to him.”

“I watched a woman stab another woman in the neck with a plastic spork, over a d*mn fruit cup.”

“When I was in Orange County Jail (CA) I saw a whole bunch of wild sh*t.

So when people “roll” into a cell or a dorm (cell = 8 man or less, dorm is 128 men in one open room divided into two inaccessible floors, so 64 on top and 64 on bottom) they usually roll in super late at night, like around midnight cuz i guess it has something to do with funding.

So anyways a guy rolls in at the like 12 am, and I am on the top floor of this dorm. Now, when you look out of the dorm main exit there is a few hundred feet of reflective glass with a catwalk behind it. The cops walk back and forth on this catwalk but most inmates use this glass to communicate with the other floor since its basically a giant mirror that spans the whole giant room.

So its late and I watch this guy come in the bottom dorm and immediately start talking sh*t to the white guy leader of the downstairs. Now I only talked to this guy one time to borrow cards but he was a nazi named “Cyclone” that literally nobody f*cked with. So new guy is spouting off at Cyclone about how he will be the new head of the woods (white people), and it just goes back and forth to the point where everyone on both floors are watching.

There are 3 words you DO NOT say to someone in OCJ, even in jest it will get you f*cked up. Calling someone a “punk”, “b*tch” or “lame” are IMMEDIATE fight words and if someone calls you any of those and you dont fight them, well thats how you get picked on. I was told that even if you’re 100% sure you will lose the fight its better to jump and get your *ss beat than be known as someone who doesn’t react.

So new guy called Cyclone one of those 3 names and in like the same breath Cyclone braces his body between two beds like he’s doing dips and lifts himself up and heel kicks the dude straight in the mouth. Well new guy is just lights out. He falls backwards limp and smacks his head on the bars. Cyclone only hit him once, and the guy was done.

One minute later everyone downstairs is screaming about something and it turns out new guy sh*t himself like a LOOOT, and if you know anything about heroin addicts that first week in jail after a bender is typically spent exclusively on the toilet and in the showers because obvious reasons. Everyone’s gagging downstairs to the point where they hit the emergency button and TOLD ON THEMSELVES. Not exactly, nobody said it was Cyclone but someone told the cops “he was mouthing off and then he sh*t himself, we need a mop.”

So cops come with medics, check the dude and stretcher him out and check everyones knuckles through the bars and of course nobody had any knuckle marks. The guy was covered in blood and sh*t and I remember watching all of this from the upstairs reflection saying to myself “holy f*ck” the whole time. I have so many other wild stories from in there this one is just the freshest in my head.”

In the comments, tell us about any stories you have from either being arrested or spending any time behind bars.